Gold soared as investors got scared by reports of an allegedly impending military conflict. Was it worth reacting sharply to geopolitical factors?

Gold has been performing quite nicely in January. As the chart below shows, its price increased from $1,806 at the end of December to around $1,820 this week, strengthening its position above $1,800. 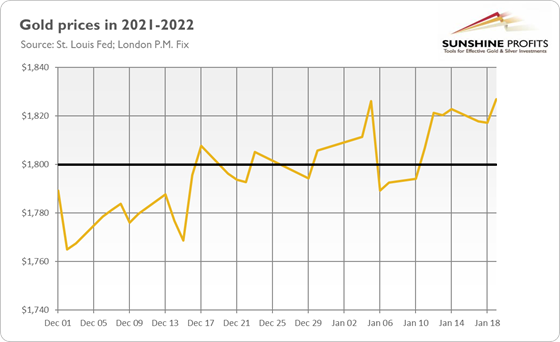 What happened? Investors got scared of the Russian bear and inflationary hydra. President Biden predicted that Russia would move into Ukraine. The threat of invasion and renewal of a conflict weakened risk appetite among investors. To complete the geopolitical picture, this week, North Korea fired missiles again (on Monday, the country conducted its fourth missile test of the year), while terrorists attacked the United Arab Emirates with drones. The heightened risk aversion could spur some demand for safe-haven assets such as gold. The yellow metal tends to benefit from greater uncertainty. However, investors should remember that geopolitical risks usually cause only a short-lived reaction.

Investors also recalled the ongoing global inflationary crisis. Some news helped them wake up. In the U.K., inflation surged 5.4% in December, the highest since March 1992. Meanwhile, in Canada, inflation jumped 4.8%, also the fastest pace in 30 years.

Additionally, crude oil prices have jumped to around $86.5 per barrel, the highest value since 2014, as the chart below shows. The timing couldn’t be worse, as inflation is already elevated, while higher oil implies higher CPI in the future. Gold should, therefore, welcome the rise in oil prices. On the other hand, it could prompt the Fed to react more forcefully and aggressively to tighten its monetary policy.

What does the recent mini-rally imply for the gold market? Well, it’s never a good idea to draw far-reaching conclusions from short-term moves, especially those caused by geopolitical factors. Risk-offs and risk-on sentiments come and go.

However, let’s do justice to gold. It hit a two-months high, more and more boldly settling in above $1,800. All this happened despite rising bond yields. As the chart below shows, the long-term real interest rates have increased from about -1.0% at the end of 2021 to about -0.6%. Gold’s resilience in the face of rising interest rates is praiseworthy. 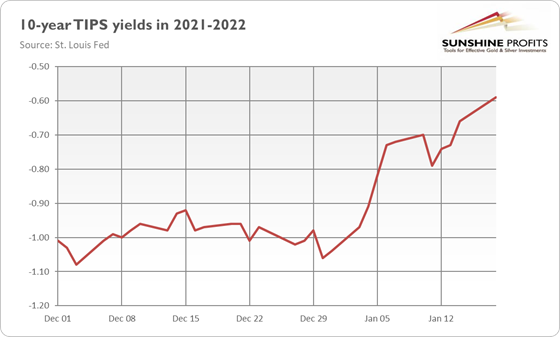 Having said that, investors shouldn’t forget that 2022 will be a year of the Fed’s tightening cycle, rising interest rates, and also a certain moderation in inflation. All these factors could be important headwinds for gold this year.

However, investors may underestimate how the Fed’s monetary policy will impact market conditions. After all, the Fed’s hawkish stance also entails some risks for the financial markets and the overall economy. Practically, each tightening cycle in the past has led to an economic crisis. As a reminder, after four hikes in 2018, the Fed had to reverse its stance and cut them in 2019. The Fed signaled not only a few hikes this year, but also a reduction of its balance sheet. Given the enormous indebtedness of the economy and Wall Street’s addiction to easy money, it might be too much to swallow.

Importantly, when the Fed is focused on fighting inflation, its ability to help the markets will be limited. I thought that such worries would arise later this year, supporting gold, but maybe the gold market has already started to price in the possibility of economic turbulence triggered by the Fed’s tightening cycle. Anyway, next week, the FOMC will gather for the first time in 2022, and it could be an important, insightful event for the gold market. Stay tuned!