Bitcoin will create, not destroy

The typical talk regarding Bitcoin is about its volatility and its speculative nature. It is portrayed as the black sheep. And Bitcoin is heavily and constantly criticized as a result. However, this picture could quickly change in the new light that now talks about digital currencies released by the government are in the forefront. A digital form of the dollar would not be a cryptocurrency though. You will not benefit like with bitcoin from a limitation of 21 million units. Bitcoin is clear and straightforward in its application and uses as a payment unit, a store of value and an accounting system. Governmental digital money on the other hand can be used just in any destructive form one can imagine. Bitcoin will create, not destroy.

What could change from your cash and typical fiat is conditional functions to your digital money. There is no limit on how your digital wallet might be getting restricted. Restrictions to what you can purchase and when you are able to buy it, even forced purchases within a certain timeframe or otherwise your money would be gone, could be implemented. We leave it to your creativity on what these restrictions might look like. Still, examples would be restrictions on travel or energy consumption, even food groups. Absolute transparency in your shopping behavior would allow for labeling you. Consequently, regulating your spending capability for “the greater good.” A surveillance nightmare for mankind. 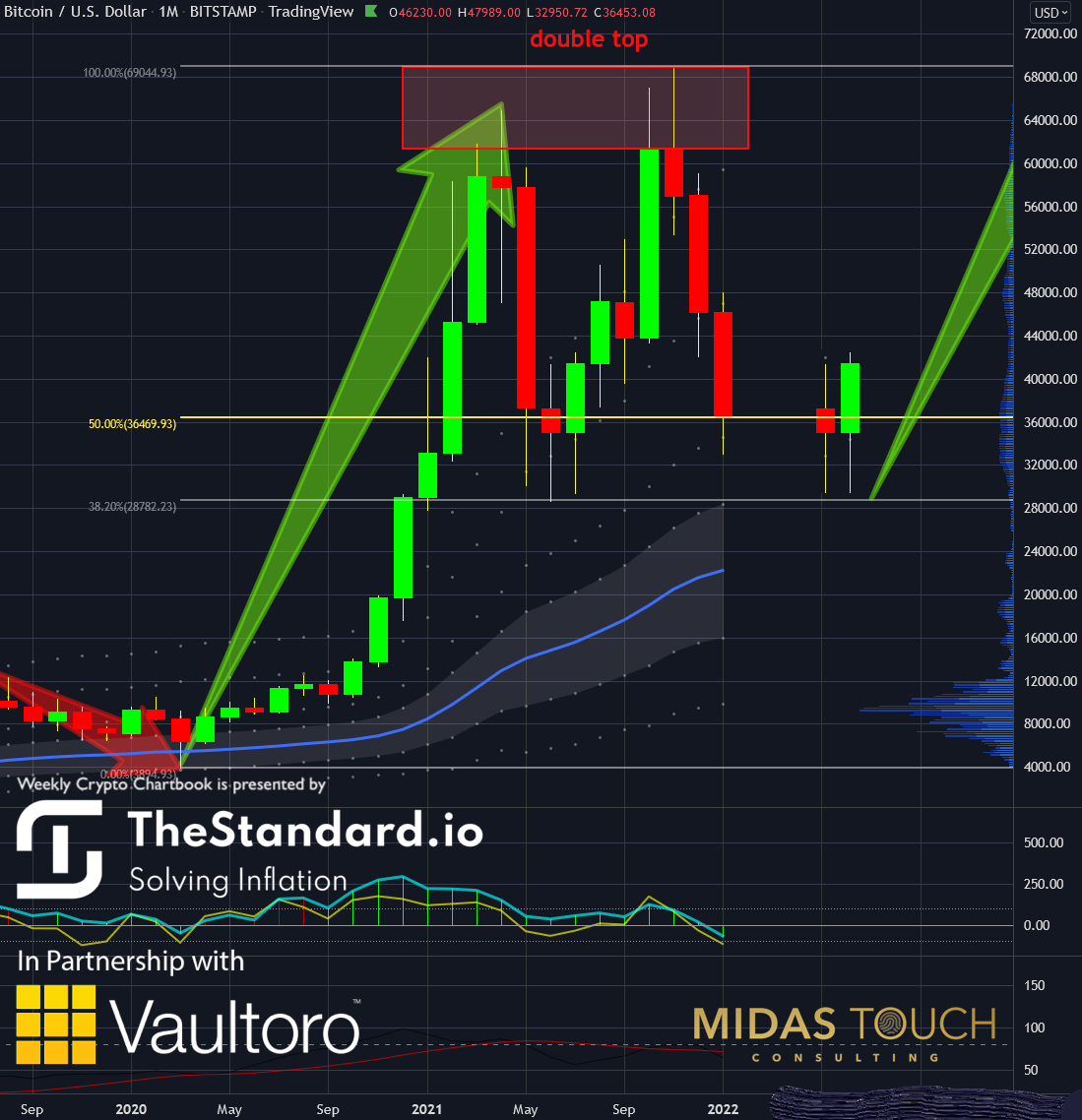 All the typical fears came forward after last week's price decline in the crypto space. Fears on why to get out of one's bitcoin hodls. Even to walk away from the idea of bitcoin being a good store of value.

But the emotional decision in market participation is often the wrong choice to come out ahead.

Bitcoin will not be regulated away. With a near 100 billion tax revenue, bitcoin is unlikely to be banned in the USA. It has established itself in size as an income stream that no one could afford to give up.

The monthly chart above shows that after the recent double top bitcoin´s two year strong up move has seen three months of a price decline to the 50% Fibonacci retracement line. To the right of the chart, we portray two fictitious candles as we see a likelihood of the future to unfold over the next two months.

BTC in US-Dollar, weekly chart, sideways to up: 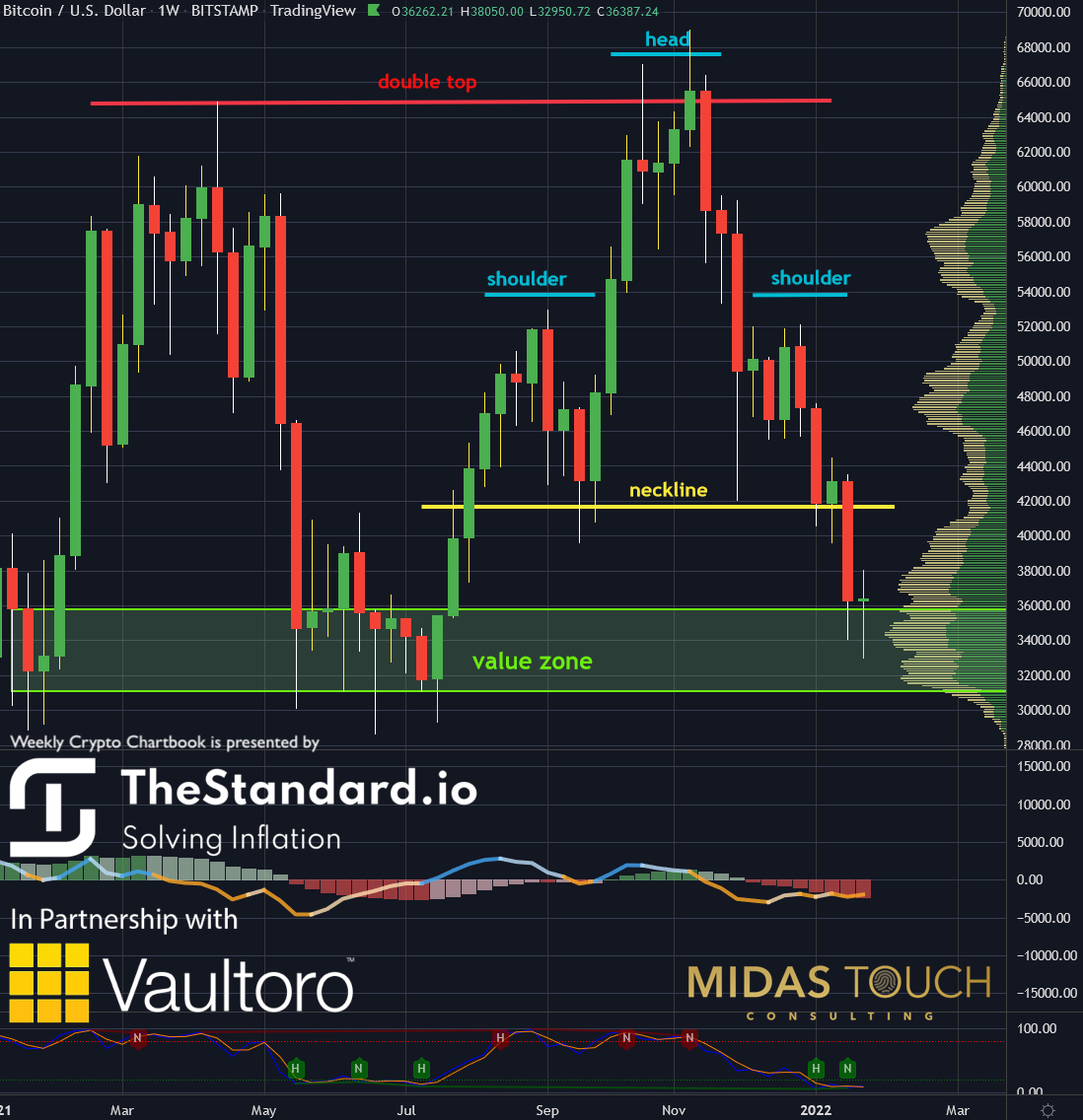 On January 20th, the Federal Reserve Board released a discussion paper that examines the pros and cons of a potential U.S. central bank digital currency. News like this shakes up investor's minds, fearing possible conversions where fiat currency savings might lose some of their value. On top, massive fear ruled the market over the last few days and weeks, a time when professionals know that opportunities are just around the corner.

A look at the weekly chart reveals that the right top of the monthly double top had a substructure of a head and shoulders formation. Last week, the shoulder line broke and sent prices plummeting for a near 22% loss.

Prices find themselves now in a value zone. In the histogram to the right of the chart, we see a fractal volume analysis. This analysis suggests supply in the price zone between US$36,000 and US$31,000.

BTC in US-Dollar, Daily Chart, Bitcoin will create, not destroy: 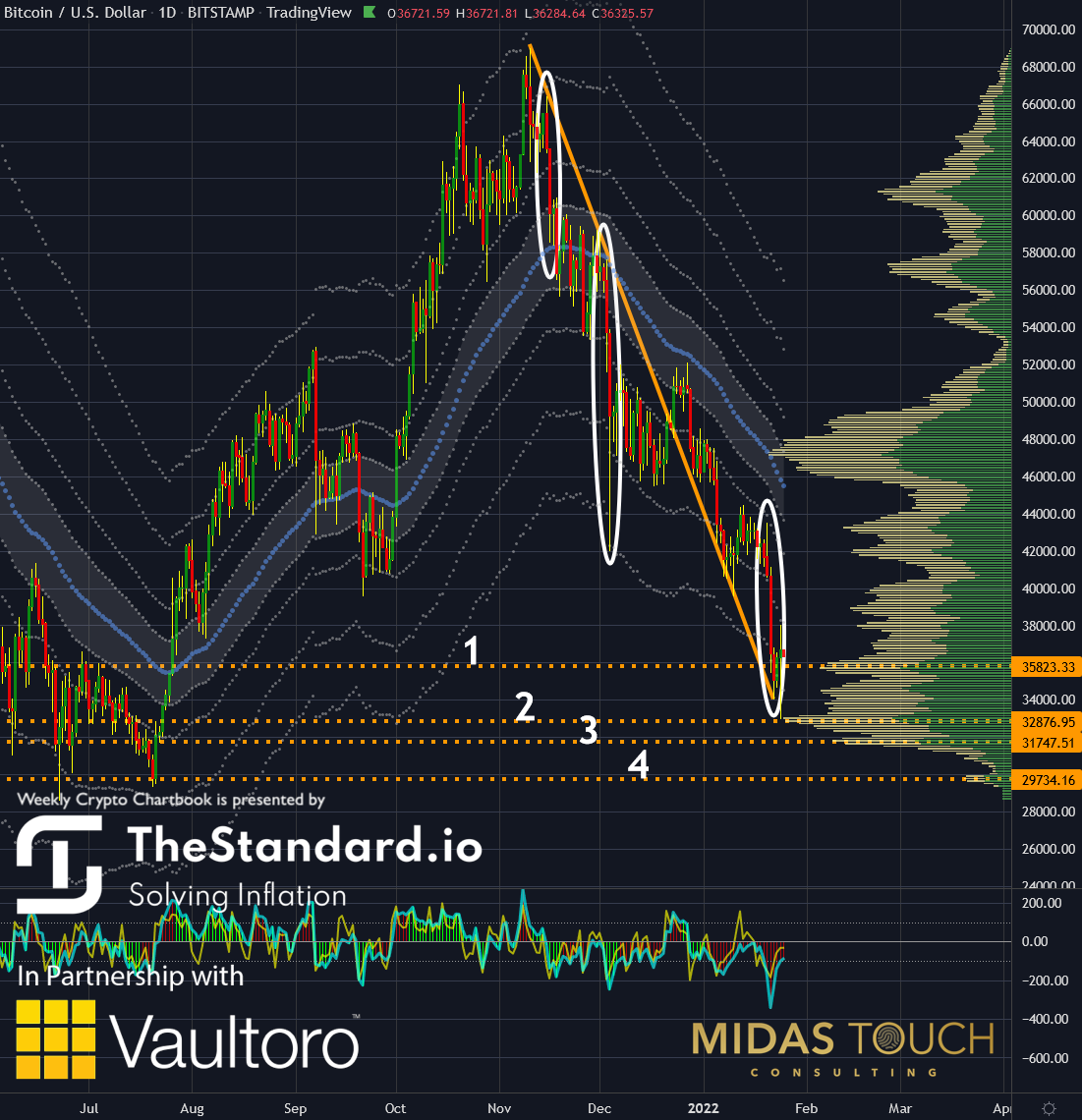 As much as we expect a sideways zone for four to eight weeks before bitcoin prices head significantly higher, we already attempted three long trades on a daily time frame after prices entered into the value zone pointed out on the previous chart. Our approach of position building thanks to a quad exit strategy exploit low-risk entry points. Consequently, we were able in the past to catch bitcoin long-term trades near their price lows. News has more than once in the past accelerated price up moves for bitcoin in an unexpected fashion. As a result, we are actively scanning for low-risk opportunities already now.

The price moves marked in white show how prices decline quickly in bitcoin, while typically trading sideways most of the time. Fortunately, rising prices act just the same way. The volume profile to the right of the chart shows four significant supply zones. (marked in orange dotted horizontal lines.)

Bitcoin will create, not destroy:

The good news is that government's conversion of fiat money to digital might scare people into fleeing with their savings into bitcoin. Henceforth, they further stabilize this payment method. We mention this possible future for bitcoin since changes could be rapid, significant, and surprising. Consequently, bitcoin might find itself in a fast uptrend with high price targets to be expected. We also want to point out the nature of your participation in long-term bitcoin acquisitions. You are not only a speculator on a perfect investment, but also a holder of a positive value. A principle value that protects your freedom of purchasing power. A purchasing power that isn't transparent allows you to conduct business as you please. Transactions without a controlling force casting a shadow over your choices.