Inflation spikes higher with the CPI index soaring to 7.5%

The cost of goods and services in the United States climbed 0.6% taking inflationary levels to the highest level seen since February 1982. The forecast by economists polled by Bloomberg News was looking for an increase in inflationary data they underestimated the spiraling costs of goods and services in America. Economists were expecting to see a rise of 0.4%, which would have taken the CPI index from 7% to 7.3%.

Today the Bureau of Labor Statistics (BLS) released the Consumer Price Index for January 2022 confirming what working Americans already knew, that there have been major price increases in the cost of food, electricity, and shelter. the CPI index came in at 40 year high of 7.5% year-over-year.

According to this report by the BLS, “The Consumer Price Index for All Urban Consumers (CPI-U) increased 0.6 percent in January on a seasonally adjusted basis, the U.S. Bureau of Labor Statistics reported today. Over the last 12 months, the all items index increased 7.5 percent before seasonal adjustment. Increases in the indexes for food, electricity, and shelter were the largest contributors to the seasonally adjusted all items increase. The food index rose 0.9 percent in January following a 0.5-percent increase in December. The energy index also increased 0.9 percent over the month, with an increase in the electricity index being partially offset by declines in the gasoline index and the natural gas index.”

According to the government report, the largest 12 month change since the period ending in August 1982 was energy which rose 27% over the last year, and the food index increased by 7%. The increase for food in January was 0.9% with the food at home index increasing by 1% over the month after rising only 0.4% in December.

This puts additional pressure on the Federal Reserve to attempt to stave off higher inflationary pressures in the future. The only tool the Fed has available to work with inflation is by raising interest rates. Extremely hawkish statements have emerged by members of the Federal Reserve.

The most hawkish statement came from the St. Louis Fed president James Bullard today. Speaking to Bloomberg news after the release of today’s CPI data he said that the Federal Reserve should adjust their monetary policy to factor in a rate hike of 100 basis points (an increase of 1%) by July 1. Asked whether or not this path would be a “shock and awe” response he said that it would be a sensible response to a surprise inflation shock that the US economy did not expect.

His response is reflected in changes in market sentiment acknowledging a more aggressive Federal Reserve. According to the CME’s FedWatch tool, the probability of a 25 basis point rate hike for the March 16 FOMC meeting is only 3.3%. The steepest rise was in the probability for a rate hike of 50 to 75 basis points (1/2 % to ¾ %) has now climbed to 96.7%. Yesterday the FedWatch tool indicated that there was only a 24% probability of that steep rate hike during the FOMC meeting next month.

All of the major equity indexes traded dramatically lower with the NASDAQ composite dropping by 2.1%, the Standard & Poor’s losing 1.81%, and the Dow Jones Industrial Average giving up approximately 500 points. 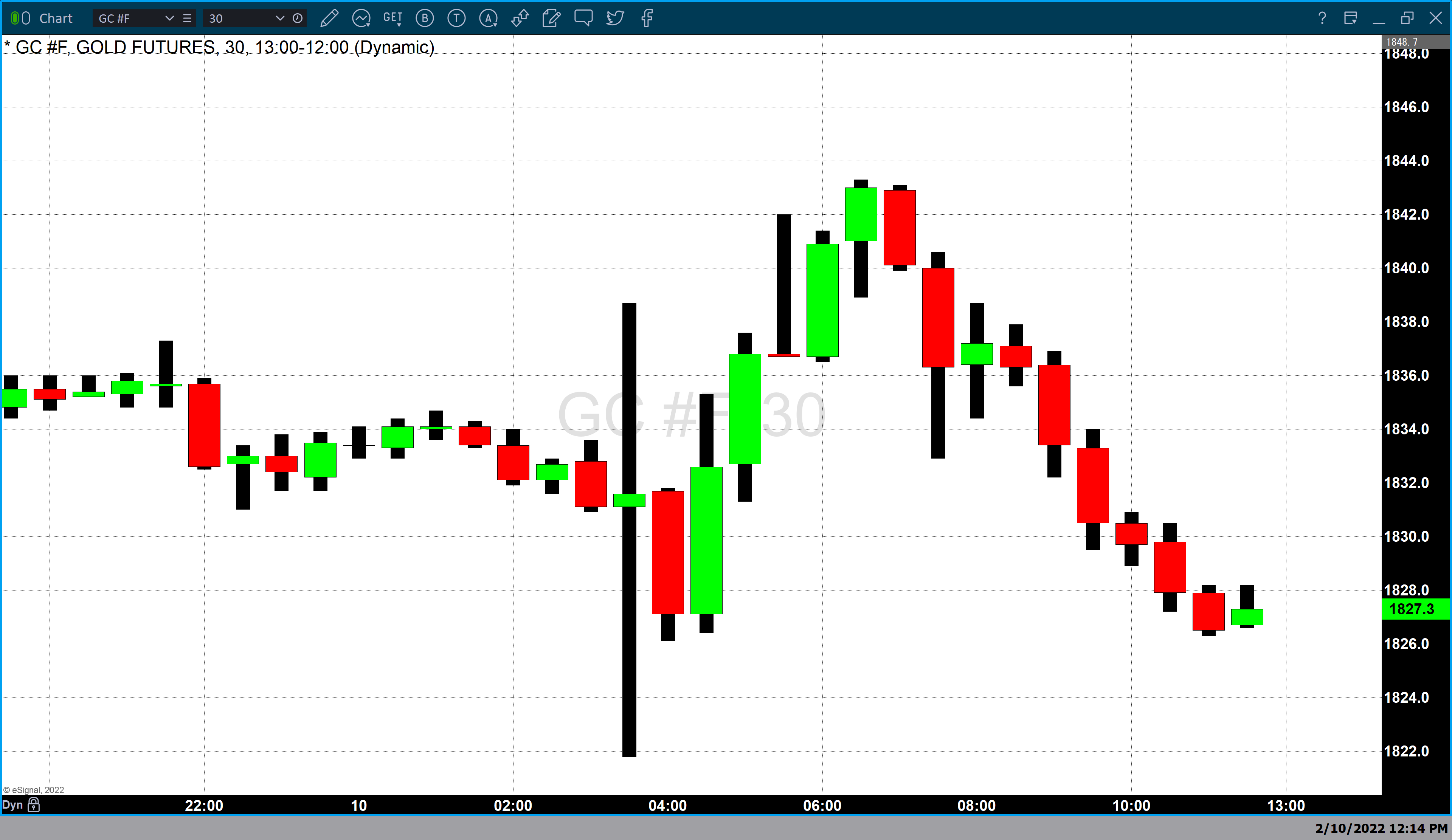 Gold investors and traders witnessed a roller coaster ride with extreme volatility as the CPI data was released this morning. Gold futures basis most active April 2022 contract opened in trading today at $1834. However, before today’s New York open gold reaction to the inflation report within the first half-hour immediately following trading to a high of $1838 and a low of $1821 (today’s low) and settled at $1831 within a 30-minute time frame. A knee-jerk reaction to the report led to gold trading to its highest value of the day which was $1843 and then staged a moderate selloff taking gold to its current pricing. 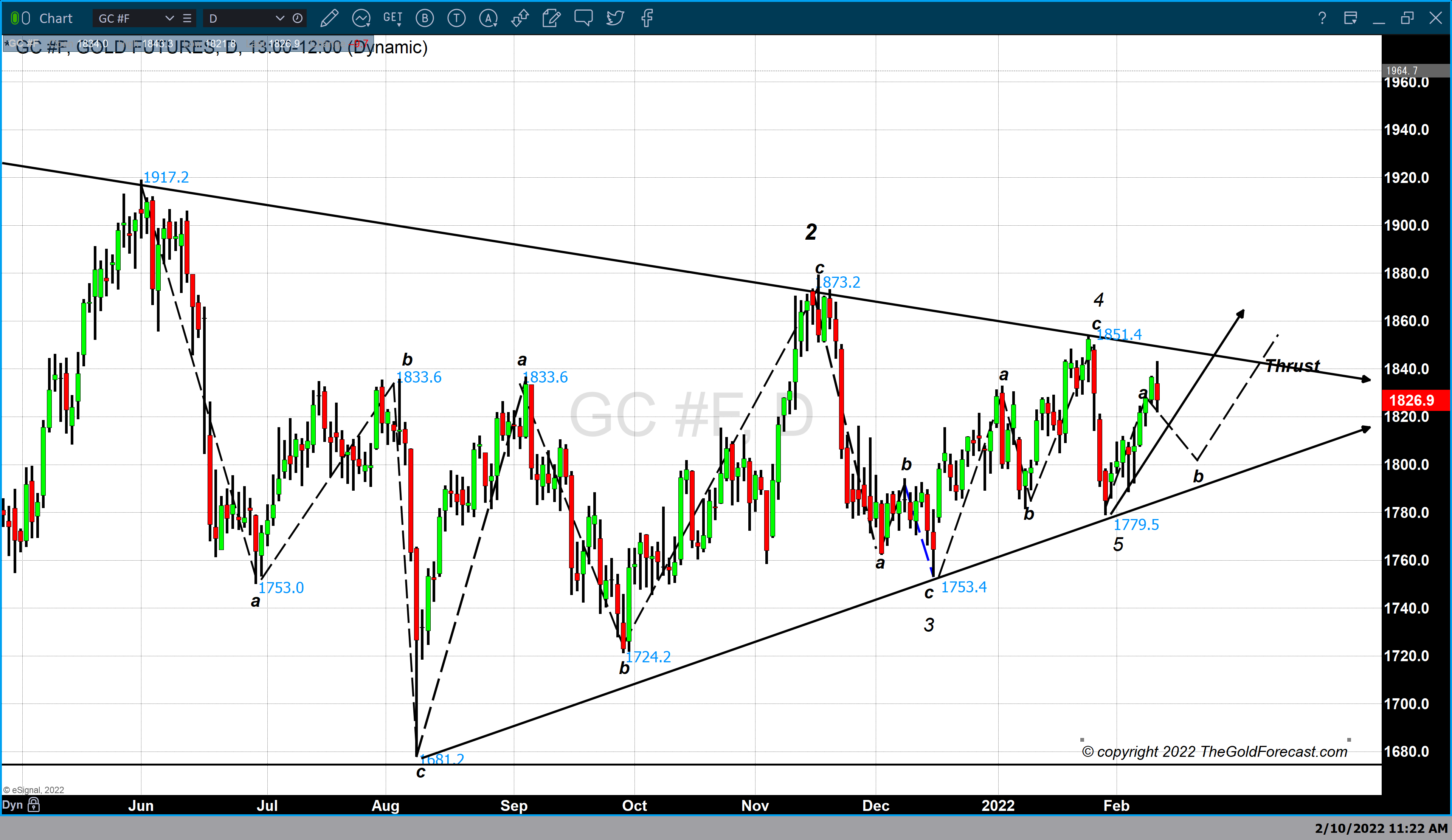 As of 5:15 PM, EST April gold futures are currently down $9.30 and fixed at $1827.30. This reflects the effect of higher inflation on gold pricing. Bullish market sentiment prevails during times of high inflationary levels, but the fear of higher interest rates has the opposite effect which will take gold lower. A reflection of both bullish and bearish market sentiment based on the high-level inflation and the potential for the Federal Reserve to respond by raising rates quicker than anticipated.