Sentiment speaks: no, Mr. bond. I expect you to fly

Those that have come to read my articles over the last decade know that I am not the typical analyst. I do not abide by the common perceptions that many falsely retain about the market. Rather, I have found something that is much more reliable as a market tell, and that is market sentiment.

To that end, we are all quite certain that we simply cannot fight the Fed. Right? This sentiment is quite ubiquitous throughout the market. But, is it really true?

I have written many articles in the past regarding the numerous times we have fought the Fed and won. You can read two of them here if you so choose:

Sentiment Speaks: The Fed May 'Cause' You To Get Caught In The Next Crash

Sentiment Speaks: I Fought The Fed... And I Won

Now, for those of you that believe that the Fed leads when it comes to interest rate moves, I have some bad news for you. It is a complete fallacy! You see, it's the market that controls interest rates. It has always been this way, and it will always be this way. The market is much stronger than the Fed. And, these this chart from The Socionomic Institute proves it. 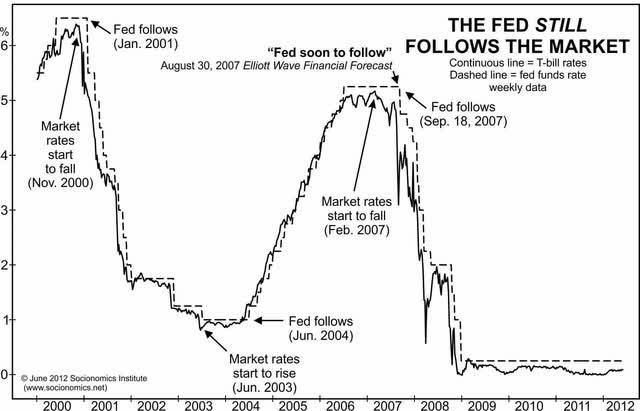 As you can see, the Fed follows the market.

Now, if you still doubt your lying eyes, well, let me give you an example. Back in November of 2018, as the Fed was still well within its rate raising campaign, I told my subscribers that I was going long the TLT in the 112/113 region, with the expectations of a sizeable rally. Clearly, they were not amused at the time. Many of my own members thought me to be crazy, as I heard over and over "you just can't fight the Fed."

Well, as we now know, the bottom of the market was struck at 111.90 in November of 2018 and the market proceeded to rally from that point, until it topped at almost 180 a little under a year and a half later. So, I guess you can fight the Fed.

Ladies and gentlemen, I think it is time to fight the Fed again. While there is still potential for the TLT to drop back down to the 137/138 region (I wrote this article when we were at 144 in TLT), I think it is reasonable to begin to layer into bonds again for aggressive traders, as I am seeing signs we are approaching a local bottom. While I will have a much better handle of a target for the next rally in the coming weeks, as the initial segment of the rally takes shape, I think the market is beginning to signal that rates may be topping out as the TLT seems to be showing signs of bottoming.

Of course, if I see a break down below the 134/135 region, then I am clearly wrong in my assessment. After all, one must always retain an eye towards risk management for any investment or trade in which they engage. But, for now, it looks like the bond market may be setting up for a rally, and as it takes shape, I would continually raise stops for risk management purposes.

Lastly, I want to warn you. This trade may last for as little as a few weeks/months, or it can potentially last as long as the next two years. Of that, I am still not certain and need to see how the next rally takes shape before I can make that determination. But, it does look like the bond market is trying to bottom out.

The other point that the market is strongly suggesting to me is that this rally I expect may be the last hurrah in the bond market for many decades to come. So, for those that do not like to pick up relative pennies in the face of a steam-roller, this trade may not be for you. In fact, if the next rally is clearly corrective in nature, then I think it signals that the lows for rates has likely been seen for many years to come, and bonds will follow suit to the downside, as the rally will likely be capped out at only a few weeks.

Even though we have been extremely accurate in our market prognostications for years, I would like to take this opportunity to remind you that we provide our perspective by ranking probabilistic market movements based upon the structure of the market price action, which tracks market sentiment. And, if we maintain a certain primary perspective as to how the market will move next, and the market breaks that pattern, it clearly tells us that we were wrong in our initial assessment. But here is the most important part of the analysis: We also provide you with an alternative perspective at the same time we provide you with our primary expectation, and let you know when to adopt that alternative perspective before it happens.

As I have said many times before, this is no different than if an army general were to draw up his primary battle plans, and, at the same time, also draws up a contingency plan in the event that his initial battle plans do not work in his favor. It is simply the manner in which the general prepares for battle. We prepare for market battle in the same manner.

By now, I hope you recognize the difference in our analysis approach, other than the accuracy thereof. We strive to view the market, and utilize our mathematically based methodology, in the most objective fashion as possible, no matter how crazy it may sound. Moreover, it provides us with objective levels for targets and invalidation. So, when we are wrong in the minority of circumstances, we are able to adjust our course rather quickly, rather than fighting the market like many others you may read. So, you will never hear from me that "the market got it wrong."