The Fed vs. bitcoin | The HIVE newsletter

In our last newsletter we touched on a topic that deserves a more thorough examination.

That topic is the difficult situation the Federal Reserve is in today. I don't envy their job. They should almost certainly be raising interest rates to combat inflation, but can they do so without popping the bubble? That is the question we will explore today.

Before your eyes glaze over, give it a chance. These "boring" topics are crucial considerations for investors. In essence, the Fed is stuck with two bad choices: let inflation run hot for a while, or tighten policy and slam the brakes on our debt-based economy.

The outcomes here will likely have a strong impact on prices of Bitcoin and Ethereum (along with everything else). If inflation continues running hot, it's possible that demand for scarce monetary assets such as Bitcoin, gold, and silver will continue rising.

This excerpt from Bitcoin: Echoes of 2013 outlines my basic theory.

"My guess is that inflation may stick around a while, because in some ways, it is the most politically-viable path. If inflation runs at 10% a year for 5 years, all of a sudden that unpayable pile of debt looks a lot smaller in comparison to the inflated currency.

Of course, that's just one possibility and we have no way of knowing what will happen going forward. But if we look to the past, we see that central banks such as the Fed have reversed course once their tightening efforts cause a major fall in stocks, or a large rise in bond yields. There seems to be too much debt and leverage in the system to sustain higher rates."

At a recent press conference, Federal Reserve Chairman Jerome Powell said it will soon be "appropriate" to begin raising interest rates, probably in March of this year. But as always, there's an important caveat which doesn't make the headline, "assuming that conditions are appropriate for doing so."

Despite his disclaimer, Powell's "hawkish" talk seems to have spooked investors. I've seen a lot of discussions around Bitcoin being challenged in a raising rate environment. The question is, if stocks and home prices are falling, will the Fed still tighten? Hmmm. Let's see what we can learn from recent history.

Truthfully, raising rates and tightening monetary policy has probably been appropriate for the past 10 years. But nobody wants a good party to end.

The pandemic has certainly played a major role, and acted as a monetary accelerant. But as you can see from the chart above, the Fed was already lowering interest rates in late summer 2019, before it began.

Today there's more debt and deficit than ever. Will the Fed begin to normalize now, with the debt situation in its current state?

Maybe. But higher interest rates would mean more expensive mortgages, loans, and refinancings. That would mean lower home prices, which depresses spending. Less spending leads to lower stock prices, which lead to even less spending. There would be more bankruptcies, which may be good long-term, but are rough on employees and investors in the short run.

This is what a Fed economist would refer to as a deflationary spiral. And something along these lines seems likely to happen if the Fed truly does normalize monetary policy, bringing interest rates back to the ~5% historical average.

If we see anything that looks like the start of a deflationary spiral, I believe the Fed will act forcefully. If markets crash, investors will scream and beg for more QE, even if it probably means higher inflation (remember Jim Cramer's famous 2007 "They Know Nothing!" rant directed at the Federal Reserve?)

Writing this piece reminded me of a wild story about former Federal Reserve Chairman Ben Bernanke, which not many people know about. According to Reuters, in 2014 Bernanke shocked guests at an event where wealthy investors paid $250,000 to have dinner with the former Fed Chair. He apparently told them he would never see 4% interest rates in his lifetime (!).

At least one guest left a New York restaurant with the impression Bernanke, 60, does not expect the federal funds rate, the Fed's main benchmark interest rate, to rise back to its long-term average of around 4 percent in Bernanke's lifetime, one source who had spoken to the guest said.

So if this report was real, what would the implications be? It would mean that at least some Federal Reserve board members likely suspect that true monetary policy normalization isn't on the table anytime soon. That it's just not realistic to normalize for the next decade-plus. Of course, the story could be false. But Reuters likely wouldn't make such a claim without pretty good evidence. And it does match with what we've seen in the 7+ years since it was reported…

One of the most original financial thinkers that I know of, Luke Gromen, has a knack for summing up the current situation. Luke is the founder of Forest for the Trees (FFTT) and posts a lot of interesting takes on Twitter. 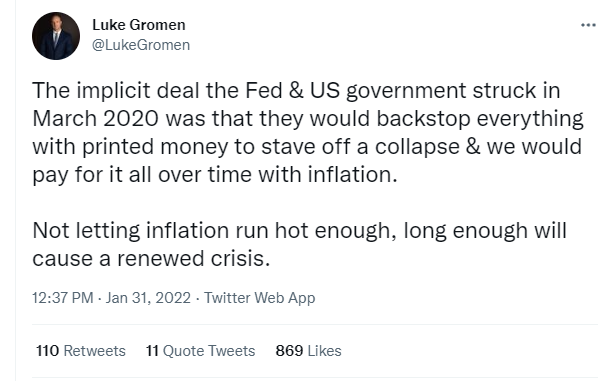 It sounds crazy, but is it really? We're in new territory here. We need to deal with the debt, and inflation offers a (crude) way to do that.

Just take a look at the Fed's balance sheet trend, which reflects the impact of QE (money printing) programs. 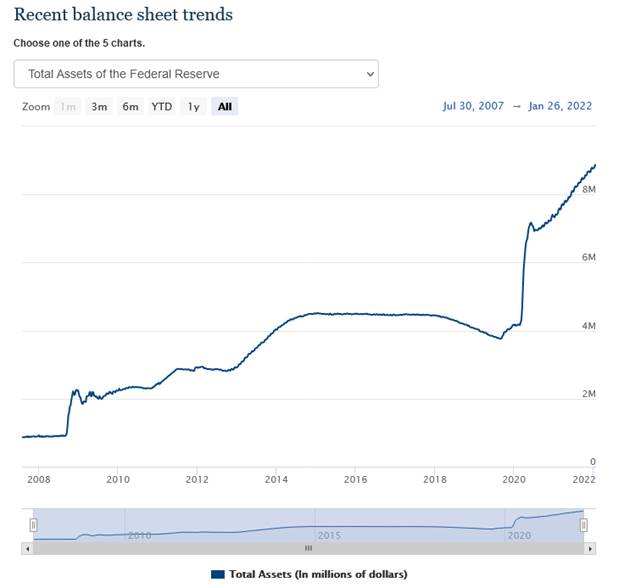 The Fed is providing a ton of liquidity to markets. Withdrawing it completely within the next 5 years seems unrealistic. In fact, I would argue that over the next few years the Fed will have to ramp up QE further. Eventually some version of Modern Monetary Theory (MMT), which advocates for openly printing money directly to pay for government spending, seems nearly inevitable.

What would MMT look like? Big infrastructure projects and other spending paid for with newly printed money, basically. In economics this process is referred to as debt or deficit monetization. If the money is wisely spent, this could deliver some real long-term value. Infrastructure isn't the worst way to spend freshly printed money.

And tangentially, Universal Basic Income (UBI), which guarantees citizens a certain level of income, may also come into play at some point.

By the way, in this article I focused on the Federal Reserve, because it's my country's central bank. But similar situations are playing out throughout much of the world.

MAKING THE CASE FOR BITCOIN

Our situation today is exactly why Bitcoin was created. It has grown from a tiny project into a ~$730 billion global asset class in 13 years. Today BTC is a popular inflation hedge for a growing list of savvy institutional investors like Paul Tudor Jones and Bill Miller. It's a speculative store-of-value with significant upside (and downside) potential.

For now, volatility in BTC is still relatively high, but it has decreased significantly over time. In Bitcoin's early days, the volatility index peaked at over 15% daily standard deviation. Today it's around 3.5%.

Volatility may continue to decrease as the market grows in size and liquidity. Over time it also seems probable that more people will adopt a long-term holding strategy, as many of those who try to time the market eventually run out of luck. Bitcoin tends to be transferred from traders to holders in the long run.

Bitcoin is a truly unique asset. One we think is well suited for a unique period in monetary history. If the "inflation runs hot for a while" scenario plays out, BTC could be a prime beneficiary (read more on why in Echoes of 2013). And Ethereum is increasingly monetarily sound, since it implemented EIP-1559 which automatically burns a significant portion of supply over time. So there's a possibility ETH also becomes a "digital gold" play.

I closed our last newsletter with why I think HIVE is well positioned today. After writing this piece, I feel reinforced in my belief. Here's the snippet.

I believe HIVE is well-positioned for an inflationary environment. Over the past 2 years the team has invested more than $160 million in crypto miners, real estate, and new construction. Our high-tech data centers have access to clean, cheap power, and stable governments. And we're still building. New machines are being installed en masse weekly as they come in from prior orders. And new buildings are going up.

We think the risk/reward on these investments is quite favorable.