Not to be taken lightly a wit what's going on with the Russia/Ukraine strain. For as the StateSide President sagaciously stated yesterday (Friday): "things could go crazy quickly" in urging U.S. citizens to vacate the premises. To which the markets responded in kind as they oft do in heated geo-political stew.

Regardless, (save for the loose-screw crowd), nobody wants things to "go crazy", period.

And specific to Gold as you regular readers know: we broadly expect price to rise as it historically has (or at least used to) in tandem with currency debasement. For when Gold otherwise rises on geo-political concern: you know, and we know, and everyone from Bangor, Maine to Honolulu and right 'round the world knows that following such induced spike like yesterday, price then two-to-three days later reverts back from whence it came. So with Gold having settled the week at 1861 -- indeed in scoring its best percentage weekly gain (+2.9%) since that ending 07 May 2021 -- should things not "go crazy", might we see Gold return right 'round to 1800 within a week's time? Even perhaps tease the 1754 level as analytically depicted a week ago? Again, nobody knows: we've only the data by which to go.

Either way, Gold -- and Silver too -- clearly gained given said geo-political stew. Notwithstanding: recall our having penned two weeks ago "Gold's Technicals Look Terrible" and last week "Gold and Silver Key Trends Rotate to Negative". And now a week hence, per Led Zeppelin's "The Song Remains the Same" --['73], neither precious metals' regression trend has turned positive, despite the spike. Updated is this graphic from a week ago: 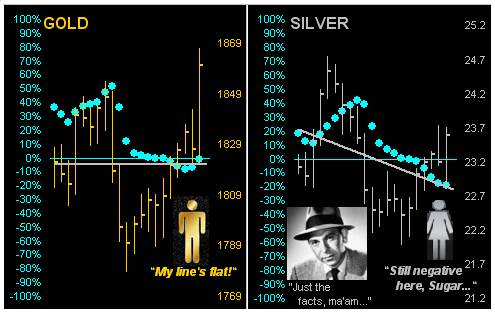 Those are the daily bars for Gold on the left and those for Silver on the right for the past 21 trading days (one trading month). The grey line in each panel is the respective linear regression trend: for Gold it has rotated from negative to flat; but for Silver it remains even more steeply negative than at this time last week. "Just the facts, ma'am" --[Sgt. Joe Friday, "Dragnet", '49-'70]:

As to Gold's weekly bars from one year ago-to-date, the past week avoided the entrapment of the ascending blues dots of the parabolic Long trend, which on balance for price itself has not been much of an uptrend whatsoever: Friday's settle at 1861 is a bit below the 1867 level reached just two weeks into said trend which commenced 14 weeks ago. And of course it goes without saying (ad nausea) that today's 1861 was first achieved on 19 August 2011 -- nearly 11 years ago -- when the U.S. money supply ("M2" basis) was but 43% ($9.5Tn) of what 'tis today ($22.2Tn). Or by our opening Gold Scoreboard, 1861 today is 45% of the 4125 valuation. Be that as it may, we're conservatively maintaining our forecast high for 2254 in 2022 per the graphic's topmost line:

As to the Stateside economy, we've this from the "Not Sure What They're Smoking Dept." You'll recall from a week ago as regards January job creation, the figure from ADP showed shrinkage of -301,000 following December's gain of +776,000. Not nearly as dire but still somewhat slowed was Labor's version of +467,000 vs. the prior month's +510,000. But nonetheless from Dow Jones Newswires came "Strong Jobs Report Points to Likely Fed Rate Rises in March and May; Friday's report showed surprising strength in hiring..." That we ain't buying. 'Tis why we maintain the Economic Barometer:

Specific to this past week, 'twas fairly light on data, the improvements being in fewer Jobless Claims and the U.S. Treasury actually reporting a year-over-year budget surplus despite the threat en route of interest payment defaults. Metrics sporting worse month-over-month readings came for the Trade Deficit, University of Michigan's "Go Blue" Sentiment Survey, slowing Consumer Credit, and a backup in Wholesale Inventories.

'Course, problematic is yield running well behind inflation, which by the Federal Reserve's favoured gauge of Core Personal Consumption Expenditures is some +6.0% annualized; hard to shield by this table of yield:

Meanwhile, have you noticed of late that each inflation report adds an additional FedFunds hike? As of two weeks ago with expectations for three hikes of the FedFunds rate, we've since had Q4's Chain Deflator, the aforementioned Core PCE, the Consumer Price Index, and come Tuesday (15 February) the Producer Price Index which is anticipated to leap. Thus with these four additional metrics that now gets us to seven rate hikes this year, at least as now is being espoused by the financial community. Further, there is speculation of raising in stints of +0.50% rather than the "usual" +0.25%. Irregardless, how may that play out for Gold? Here's one Golden-Oldie from The Gold Update archives:

That's a +58.8% three-year increase in the price of Gold. Increasing today's 1861 by that pace puts price during the year 2025 at 2955, fairly underwhelming by the 3Ds of Debasement, Debt and Derivatives, let alone the present Scoreboard valuation of 4125. But we'll take what we can get.

As for "The Now", here are the 10-day Market Profiles for Gold (below left) and for Silver (below right). Two lovely bottom-up moves there; but shall the geo-political spike sustain, or instead revert next week with the usual wane?

Let's do The Stack:

Gold's Value per Dollar Debasement, (from our opening "Scoreboard"): 4125

Trading Resistance: none, by the Profile

To wrap, if you're a fan of the Econ Baro, next week works right into your wheelhouse: 17 metrics are due! That is off the edge of the Bell Curve for a typical week's schedule. But which way shall the Baro break? We'll have our take. In the meantime, geo-political breakout or fake-out, with Gold ensure you've yours staked out! 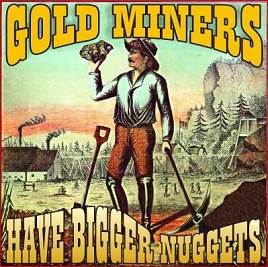 Squire... is that your graphic?