S&P 500 plunged with broad participation, a bit more than could be expected by the credit markets action. The bulls lost a good intraday opportunity to move above 4,420, and now it's up to the credit markets to… confirm the carnage as today's title says. The single oddity has been the tech slide with Treasuries moving higher (what a contradiction as Fed's Bullard just mentioned the need to move now before inflation gets out of control), but that could be amplified by the ARRK contribution to the selling pressure.

Corporate junk bonds though haven't declined below the recent lows, which highlights the negative sentiment in stocks as the one setting pace. The open short profits can keep growing, but it would be wise to protect them with a reasonable trailing stop-loss. Even though the reversal didn't come yesterday, the bears are likely to slow down to some degree next week – as a result of forthcoming credit markets action.

Such were my yesterday's thoughts:

(…) Precious metals adored the combo of yields and dollar turning down – and reacted with the miners' outperformance. The silver to copper ratio is basing, and the white metal looks to have better short-term prospects than the red one. Still in the headline sensitive environment we're in, gold would be stronger than silver until inflation is recognized for what it is.

If there's one thing that the aftermath of Fed minutes showed, it's that the commodities superbull is alive and well, and that precious metals likewise are acting very positively in this tightening cycle. Suffice to say that gold has a track record of turning up once the rate hikes finally start…

With gold at $1,900 again and silver approaching $24, copper's fate is also brightening – the miners' continued outperformance is a very good sign. With crude oil taking a breather, the inflationary pressures aren't at least increasing, but don't look for the Bullard or other statements to defeat inflation – I'm standing by the 4-5% official rate CPI data for 2022 (discussed in yesterday's summary). 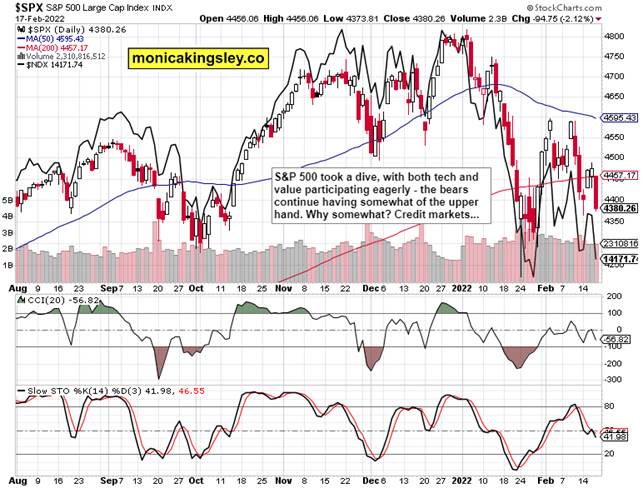 S&P 500 continues being under pressure, and the buyers aren't yet enticed to enter. Today's session might not be as volatile as yesterday's, but it won't be a breather either.

HYG looks to be basing, but the bulls' time might not be here just yet. I'm looking for a choppy session today, with implications leaning bearish.

Precious metals fireworks arrived yesterday – the chart has for quite some time been of the coiled spring flavor. With miners doing this great, the bulls are having the upper hand. Let's get done and over with the rate hikes start! 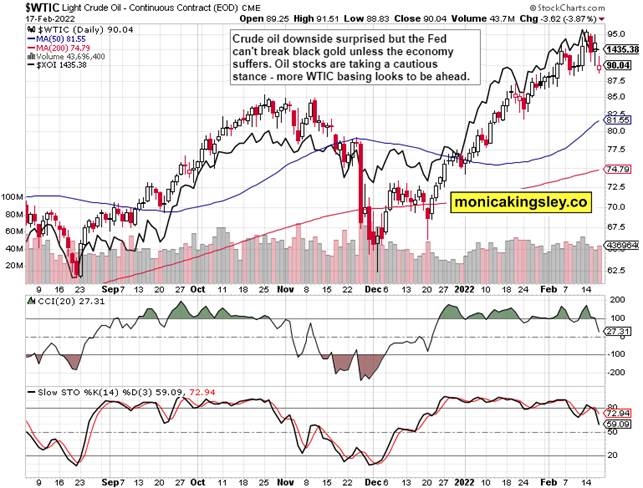 Crude oil keeps correcting even though oil stocks remain relatively stronger. More sideways price action can be expected, but given yesterday's weakness, we may not have seen the short-term bottom yet. 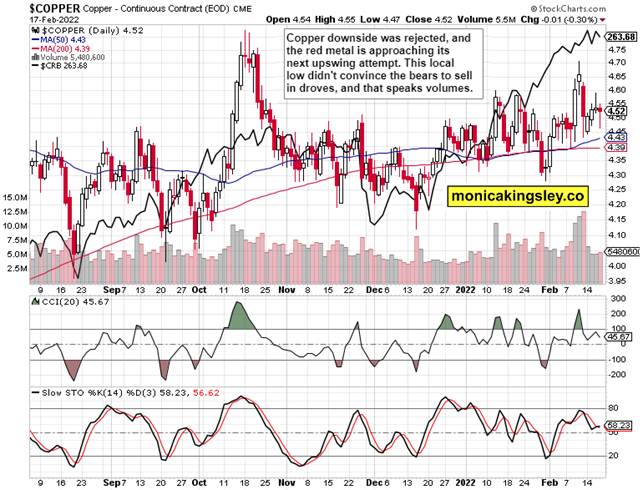 Copper downswing was quite convincingly bought, and the red metal appears nearing fresh gains. The volume certainly isn't leaning in the favor of sellers. 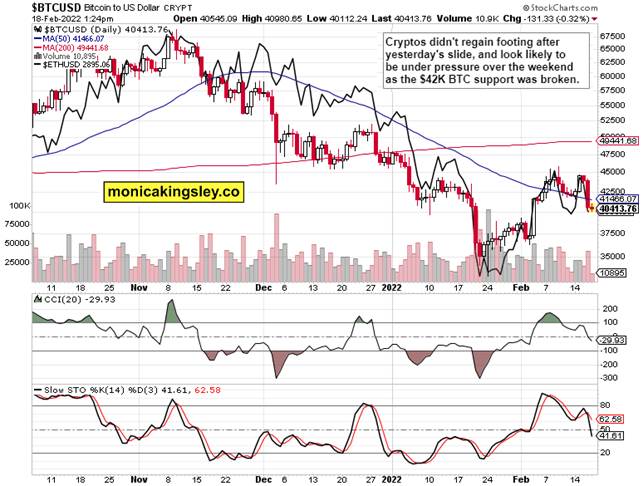 Cryptos did break down, and the preceding $42K Bitcoin support succumbed on high volume. The bears have the upper hand now.

S&P 500 bulls were nowhere to be seen yesterday, but there are green shoots of upcoming upswing attempt in the credit markets – unless these confirm yesterday's carnage with more of a risk-off turn today. Today's session is likely to be volatile, with the direction set by the tech – the bears have the slight advantage. Precious metals and select commodities are likely to be winners as these bull runs continue – it's a very strong omen that gold and miners are leading this convincingly. Silver and more of the commodities space would join once it becomes apparent that the Fed's inflation quelling attempts are insufficient, and that each subsequent verbal hawkishness produces less bang for the buck. Long past is the June 2021 FOMC shock...