Not only won't inflation end soon, it's likely to remain high. Whether gold will be able to take advantage of it will depend, among others, on the Fed.

Do you sometimes ask yourself when this will all end? I don't mean the universe, nor our lives, nor even this year (c'mon, guys, it has just started!). I mean, of course, inflation. If only you weren't in a coma last year, you would have probably noticed that prices had been surging recently. For instance, America finished the year with a shocking CPI annual rate of 7.1%, the highest since June 1982, as the chart below shows. 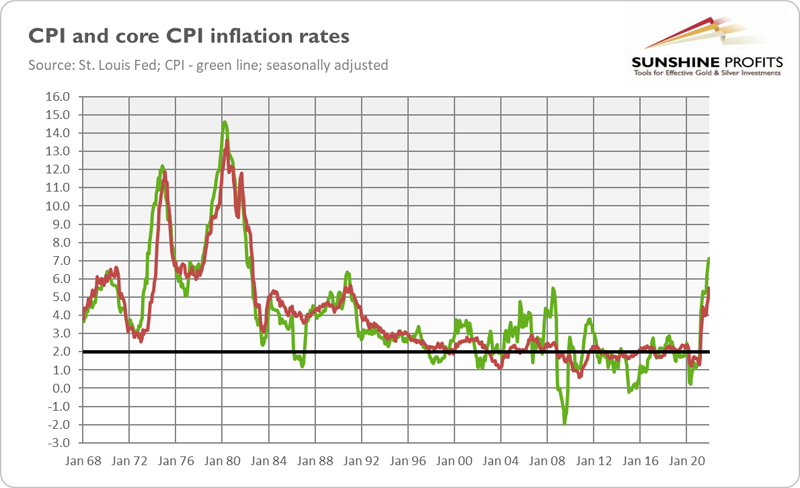 Now, the key question is how much higher inflation could rise, or how persistent it could be. The consensus is that we will see a peak this year and subsequent cooling down, but to still elevated levels. This is the view I also hold. However, would I bet my collection of precious metals on it? I don't know, as inflation could surprise us again, just as it did to most of the economists (but not me) last year. The risk is clearly to the upside.

As always in economics, it's a matter of supply and demand. There is even a joke that all you need to turn a parrot into an economist is to teach it to say 'supply' and 'demand'. Funny, huh? When it comes to the demand side, both the money supply growth and the evolution of personal saving rate implies some cooling down of inflation rate.

Please take a look at the chart below. As you can see, the broad money supply peaked in February 2021. Assuming a one-year lag between the money supply and price level, inflation rate should reach its peak somewhere in the first quarter of this year. 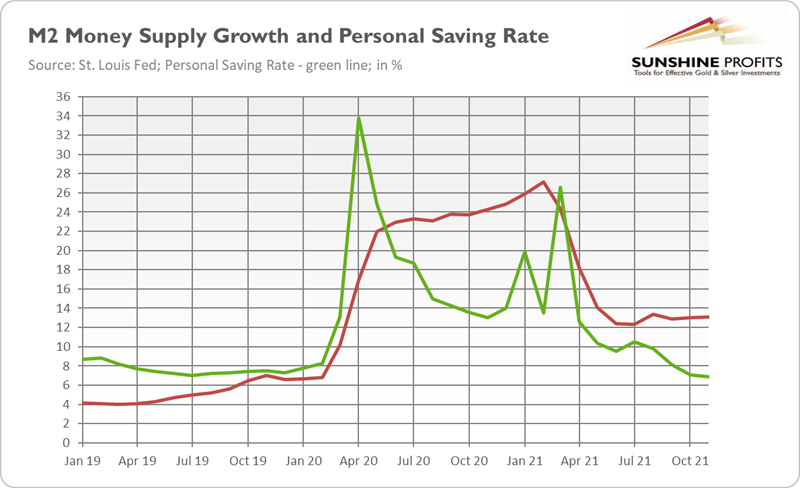 There is one important caveat here: the pace of money supply growth has not returned to the pre-pandemic level, but it stabilized at about 13%, double the rate seen at the end of 2019. Inflation was then more or less at the Fed's target of 2%, so without constraining money supply growth, the US central bank couldn't beat inflation.

As the chart above also shows, the personal saving rate has returned to the pre-pandemic level of 7-8%. It means that the bulk of pent-up demand has already materialized, which should also help to ease inflation in the future. However, not all of the 'forced savings' have already entered the market. Thus, personal consumption expenditures are likely to be elevated for some time, contributing to boosted inflation.

Regarding supply factors, although some bottlenecks have eased, the disruptions have not been fully resolved. The spread of the Omicron variant of the coronavirus and regional lockdowns in China could prolong the imbalances between booming demand and constrained supply. Other contributors to high inflation are rising producer prices, increasing house prices and rents, strong inflation expectations (see the chart below), and labor shortages combined with fast wage growth. 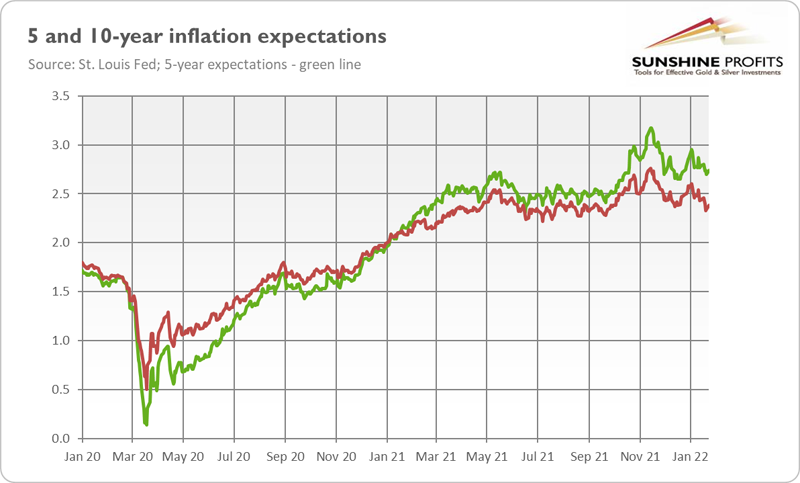 The bottom line is that, all things considered – in particular high level of demand, continued supply issues, and de-anchored inflation expectations – I forecast another year of elevated inflation, but probably not as high as in 2021. After reaching a peak in a few months, the inflation rate could ease to, let's say, around 4% in December, if we are lucky. Importantly, the moderate bond yields also suggest that inflation will ease somewhat later in 2022.

What does it mean for the gold market? Well, I don't have good news for the gold bulls. Gold loves high and accelerating inflation the most. Indeed, as the chart below shows, gold peaks coincided historically with inflation heights. The most famous example is the inflation peak in early 1980, when gold ended its impressive rally and entered into a long bearish trend. The 2011 top also happened around the local inflationary peak. 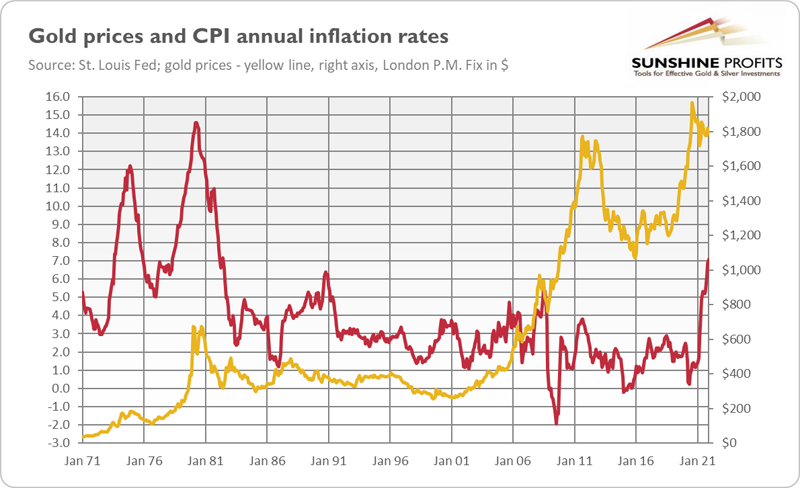 The only exception was the 2005 peak in inflation, when gold didn't care and continued its bullish trend. However, this was partially possible thanks to the decline in the US dollar, which seems unlikely to repeat in the current macroeconomic environment, in which the Fed is clearly more hawkish than the ECB or other major central banks. The relatively strong greenback won't help gold shine.

Surely, disinflation may turn out to be transitory and inflation may increase again several months later. Lower inflation implies a less aggressive Fed, which should be supportive of gold prices. However, investors should remember that the US central bank will normalize its monetary policy no matter the inflation rate. Since the Great Recession, inflation has been moderate, but the Fed has tightened its stance eventually, nevertheless. Hence, gold may experience a harsh moment when inflation peaks.