How HIVE stacks up

When HIVE went public in September of 2017 on the Toronto Venture Exchange, it was an outlier. A publicly traded crypto miner?!

To me, the concept of a crypto mining stock seemed unlikely, mostly for regulatory reasons.

We have to remember that Bitcoin and Ethereum were still dirty words on Wall Street in 2017. Regulatorily, it was a giant gray area. And there were no big publicly-traded miners. I recall being impressed that HIVE pulled it off.

Nobody was sure how accounting should be handled. And analysts had no idea how to value such a stock (many still don't even try).

So HIVE led the way, and today the company is a leading miner of Ethereum and Bitcoin.

In this article we're going to take a look at how HIVE stacks up against our competition, both in terms of valuation, and strategy.

Since 2017 the industry has grown and evolved quickly. There are now dozens of public crypto miners. They trade on the NYSE, Nasdaq, and many other global markets. The market cap in the US of the top 10 companies now exceeds $10 billion.

And in the US, the SEC recently approved the first crypto miner ETF. It's called the Valkyrie Bitcoin Miner ETF, and the ticker is WGMI (which in crypto slang is short for "we're all gonna make it").

HIVE makes up approximately 9% of the new miner ETF, according to a fact sheet dated January 2022. What we find interesting is that the fund seems to place high importance on environmental sustainability. On the ETF's official page, Valkyrie proudly displays that the fund's portfolio utilizes 77% renewable energy.

Why is the first US Bitcoin miner ETF focused on sustainability? My guess is because it is an increasingly important consideration for institutional investors. We'll dig into power a bit more below, and in the next newsletter, but for now let's get back to the topic at hand – how HIVE stacks up against the competition in terms of valuation.

In the traditional investment analysis world, there are established models that are used to value certain sectors. There's nothing like that for crypto companies, at least not yet. Everyone, from individual investors to professionals, is figuring it out along the way.

Even institutional analysts don't really know how to value us. However, there are a small but growing number of firms covering crypto stocks.

One example is H.C. Wainwright's Kevin Dede, Managing Director and Senior Technology Analyst, who is doing notable research in the mining space. Kevin covers HIVE and a number of our competitors. On January 22, 2022 he reaffirmed his firm's buy rating on HIVE and maintained his $5 price target. Kevin is a seasoned analyst and has a 4-star rating on TipRanks, with an average 10.7% annual return.

But what's really interesting is that some of the best work on miners is being done by individual investors.

Here are two of our favorite independent mining sleuths.

Independent analyst Blonity does some of the most in-depth research in the mining industry. His Youtube channel is one of the most valuable resources in the crypto mining space.

In a February 4th video, Blonity posted the following charts of his own valuation methodology. The chart on the left shows hashrate growth during the month of JanuaryBitcoin mined per billion USD of market capitalization.

According to this research, HIVE stacks up well against the competition in terms of productivity and hashrate growth. We rank #1 for productivity as measured by Bitcoin mined per installed Exahash per day.

Anthony Power is an independent crypto mining analyst from the UK. Anthony is a retired accountant who spent 24 years in the army, followed by some time in the private sector.

He recently posted his miner analysis on Twitter, and HIVE received the top ranking among eight leading miners.

One of the more important stats in this chart is Bitcoin mined per 1 EH (exahash). This metric measures operational efficiency, and HIVE received top ranking.

I asked HIVE President Aydin Kilic what explains our advantage here, and he replied, "This is attributable to our high uptime, and dedicated team of technicians, network and systems operators and analysts. They work around the clock ensuring optimal hashrate."

In a recent YouTube interview with Blonity, Anthony was asked which miner produces the lowest cost Bitcoin between HIVE, HUT 8, and Bitfarms. He responded that HIVE produces the cheapest Bitcoin as of the last quarterly report.

If you're interested in mining economics, I do recommend checking out the interview. Blonity and Anthony go deep into the topic, discussing underappreciated metrics such as total cost per coin produced, depreciation, and much more. They're two of the most knowledgeable crypto analysts around. And we're proud to count both as shareholders.

During volatile times, some investors look to the basics of a business. Profitability, cash flow, and growth.

Return on equity (ROE) is a classic metric where HIVE compares well with the competition. According to Investopedia, ROE is "considered a gauge of a corporation's profitability and how efficient it is in generating profits."


Another classic way to analyze a stock is using its price/earnings (P/E) ratio. This is a simple metric that looks at how expensive, or cheap a company is.

HIVE's P/E stacks up well here against our competitors.

Another classic valuation factor is price/sales. The lower the ratio, the higher the revenue in comparison to market cap.

HIVE just reported a record $68 million in revenue for the quarter ended December 31st 2021. That's up 397% from the previous year.

Net income for the quarter was $64.2 million due to higher crypto prices, increased capacity, and gains on sales of digital currencies.

In our view, HIVE is attractively valued today. We are focused on creating long-term value with strategic investments in data centers, mining equipment, and building out our team with world-class talent.

For much more information on HIVE's recent performance, check out our latest webcast. In it, we cover results for the quarter ended 12/31/2021, and provide corporate updates on construction, deliveries, capacity, and much more.

Here are a few highlights.

Not Settling on Power

Besides financial fundamentals, one of the things that we feel sets HIVE apart is how we have managed to achieve both a low environmental footprint, and a very low cost of power.

There seems to be a false perception out there that miners have to choose between cheap power, and clean power. HIVE found both. We acquired and built facilities that have access to cheap renewable hydroelectric and geothermal power.

As a result, the rate we pay for electricity is among the lowest in the world. And our footprint is pretty darn green. Institutional investors are increasingly concerned about the environmental impact of their portfolios, and we don't think this trend is going away anytime soon. HIVE is well-positioned in this regard. We think it's the responsible thing to do from both a moral standpoint, and an economic one.

Take a look at the Grand Falls generating station, which is near our Bitcoin mining campus in New Brunswick, Canada. 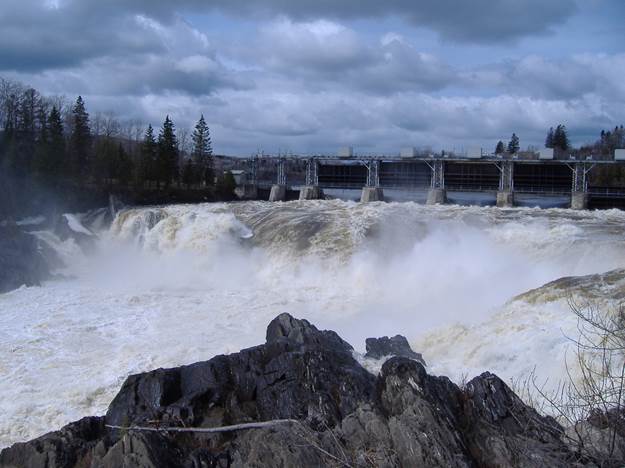 There's an incredible amount of clean, cheap hydro out there. So why wouldn't we base our operations nearby? This is just one of the key ways HIVE's strategy differs from other miners. But we think it's an important one.

In the next newsletter, we're going to do a deep dive on "The Great Crypto Energy Debate". The issue is far more complex than it seems at first glance, and we hope to shed some light on common misconceptions. Look for that in about a week.

Tuesday's Charts for Gold, Silver and Platinum and Palladium, August 9

Silver breaking out to the upside, will gold follow?

Where are the stops? Tuesday, August 9, gold and silver