As investors flock to safe havens, gold equities may come out as the biggest winners

The recent geopolitical tensions in Ukraine tell us that during troubled times, investors will still be in favor of gold as a safe haven.

After a rather underwhelming 2021, bullion has had a tantalizing start to the year. Year-to-date, the precious metal has surged by more than 4%, with most of the gains coming over the last three weeks, coinciding with what may be the biggest military crisis in Europe in decades. 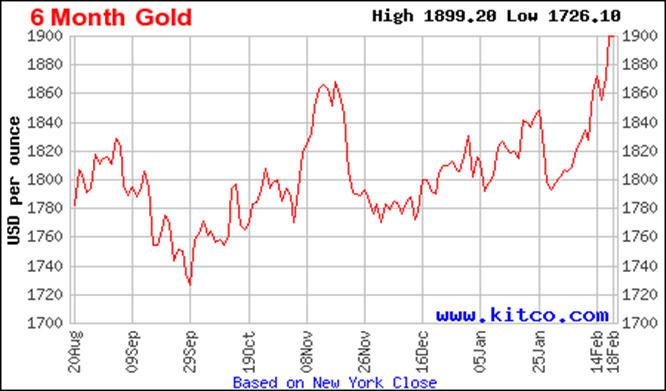 Spot gold over the past six months. Source: Kitco

Gold prices are now at their highest in eight months, nearing the key $1,900 an ounce level last seen in early June 2021. But analysts believe there is a runway for movement upwards, long as the situation in Ukraine remains unresolved.

On Monday, Russia released a statement shooting down reports of a potential summit between President Vladimir Putin and his US counterpart Joe Biden to resolve the standoff over Ukraine, adding further momentum to gold-buying while dampening investors' risk appetite even more.

"Further gold strength cannot be ruled out for now — a move beyond $1,900 is likely to be amplified in the short term by momentum buying" and fearing-of-missing-out trades, according to UBS Group AG analyst Joni Teves in a Bloomberg note.

"(Gold) is holding up well. The last time we moved up to these levels it ended up being a bull trap and the market came off very sharply. We've seen some good flows into the ETFs, which is encouraging," independent analyst Ross Norman said in a separate Reuters report.

What's impressive about this gold rally is that it came despite months of bearish sentiments from the prospects of multiple rate hikes by the US Federal Reserve this year, the first of which is anticipated next month.

But as we've discussed, higher rates to combat inflation may not really be a bad thing for bullion.

While it's true that a rate hike is initially negative for gold, as it loses investment appeal to interest-yielding assets (i.e. Treasuries), the bigger picture is that the precious metal fared better coming out of rate hike episodes in the past.

Previous Fed attempts to control inflation with rate increases have resulted in a recession, with the most recent example being in 2018, when the stock market tanked following a series of tightening measures.

Should history repeat itself, then gold — being the go-to place of safety — should be able to excel. Even without an event as catastrophic as a market crash, as Goldman Sachs notes, signs pointing towards the economy slowing more than expected could still support bullion.

According to Adam Hamilton of Zeal Intelligence, gold thrived during the past couple decades' rate-hike cycles, and it will likely thrive again during the next one.

"Despite gold-futures speculators' paranoia, a half-century of market history has proven this in spades. Gold rallied strongly on average during fully two-thirds of all modern hiking cycles.  Gold performed best entering them relatively low with the FOMC hiking its federal-funds rate gradually. Both conditions are true today heading into the Fed's looming thirteenth cycle," Hamilton wrote in his latest publication.

Even recently, gold has performed quite well despite increases in US 10-year Treasury yields and the US dollar index, both of which are strong determinants of the gold price.

According to Bank of America strategists, "There are significant dislocations buried beneath headline inflation, interest rates and currency moves, raising the appeal of holding the yellow metal in a portfolio and supporting our $1,925/oz average gold price forecast for 2022."

Given the bullish forces and upside momentum, Citi recently increased its near-term gold price target to $1,950/oz — a $125/oz increase from its previous forecast — and upped its full-year outlook by 7% to an average of $1,805/oz.

As for what could propel gold even higher, the loss of faith in central banks' policies to fight inflation is one potential demand driver. The metal has already shrugged off the Fed's most extreme hawkish lurching ever, while staying on course in its upward trajectory.

Of course, a recession, either Fed-driven or through other means, would also be very bullish for the precious metal. This is because gold has always been the ultimate diversifier, tending to rally when the stock markets materially weaken.

Not to mention that gold is still lagging far behind the red-hot inflation unleashed by all that money printing from the Fed. Traditionally, gold is viewed as the magic bullet for inflation, and historically, it has the habit of taking flight on massive inflation spikes.

A couple of other fun facts in favor of gold right now:

1) Russia has made some big moves out of US dollars and this may be emboldening Putin on a potential invasion of Ukraine.

2) A number of US states have removed sales taxes on precious metals purchases. Ohio and Texas have gone so far as to diversify their public pension funds with gold investments.

However you look at it, the outlook for gold looks extremely positive, which is why we continue to hold physical gold and invest in quality junior gold explorers that can offer outstanding leverage to rising gold prices.

In fact, gold stocks are about to dethrone oil and gas as the top-performing sector in both the US and Canadian equity markets. Oil is another strategic commodity whose price has soared on rising tensions in Ukraine.

In Toronto, where the most large-cap gold and mining stocks are traded, the S&P/TSX Composite Gold Index has risen by over 15% this month, outperforming the Energy Index by 13 percentage points and the broader market by almost 15 percentage points each.

Recent events all indicate that gold is on the verge of breaking out, with gold miners' stocks likely to emerge as the biggest winners when the dust settles.

At AOTH, we have been monitoring a few gold (and silver) juniors that we believe are holding highly promising mining projects to leverage the high price environment, potentially taking the market by storm:

Production at the former San Francisco mine restarted in the third quarter of 2020, and full-scale commercial production was achieved in July 2021.

Magna is also advancing several other precious metals assets across Mexico, including the San Judas gold project, also in Sonora, and the newly acquired Margarita silver project in Chihuahua.

Coming off a series of property transactions over the past year and a recent name change (formerly JNC Resources), RooGold is uniquely positioned to be a dominant player in New South Wales through a growth strategy focused on the consolidation and exploration of highly mineralized precious metals properties in this prolific region.

Mineralization across all these properties is associated with significant, largely untested regional structures or contacts, on which gold and silver endowment is underpinned by historical mining activity, thus providing excellent discovery potential.

Fondaway Canyon has been the subject of multiple exploration campaigns dating back to the late 1980s and early '90s, with nearly 50,000m of drilling completed. It covers 12 known veins, including five mineralized areas — Colorado, Halfmoon, Paperweight, Silica Ridge and Hamburger Hill.

To date, Getchell has drilled two very successful programs at Fondaway Canyon in 2020 and 2021. The results are expected to be compiled into an updated resource estimate, due sometime in the second half of 2022.

Recent assays continue to demonstrate the strong continuity and potential scale of the mineralizing system at Fondaway Canyon, highlighted by the best gold intercept in the 40+ year drilling history of the project.

Over 23,000 meters in 43 holes have been completed since drilling restarted in February of 2020.

Drilling last year focused on the Cleary-Dolphin area, with approximately 40,000 meters planned in 80 holes. The program continues to test Freegold's hypothesis that there is potential for a higher-grade corridor of mineralization that may extend from the area of the old Cleary Hill mine workings towards the Dolphin intrusive.

Infill drilling to upgrade and expand the existing resource categories is also being undertaken, as well as a cultural resource and environmental baseline work aimed at advancing the project through pre-feasibility.

Dolly Varden Silver Corp. (TSXV: DV) (OTC: DOLLF) — Predominantly a silver-focused explorer, the company's flagship project is located in the southern part of BC's Golden Triangle, an area well-known for its base and precious metals deposits.

The property hosts four historically active mines — Dolly Varden, Torbrit, North Star and Wolf — all have parts that remain unexplored to this day. More than 20 million ounces of high-grade silver have been produced from these deposits in the past (1919-1959).

The consolidated project, named Kitsault Valley, is now considered among the largest high-grade, undeveloped precious metal assets in Western Canada, with a combined mineral resource base of 34.7moz silver and 166,000 oz gold in the indicated category.

Regional exploration and reconnaissance drilling also led to the identification of a large, new porphyry-related copper-gold system that may be related to many others in the Golden Triangle, such as  KSM, Treaty Creek, Saddle, Red Chris and Snowfield.

Gold has historically rallied during periods of economic and political turmoil, and this time, it won't be any different. So far this month, the metal has gained nearly 5% as investors seek haven amid the growing crisis in Europe.

Even disregarding that, bullion has enjoyed healthy gains despite the widely anticipated rate hikes by the US Federal Reserve, the first of which is expected to come in March.

Amongst the uncertainties of global markets, gold is well-positioned for another monumental run, making gold equities an attractive bet in advance of the next breakout.