It was a volatile trading session across multiple asset classes as concerns surrounding Russia’s invasion of Ukraine continued to grow. Tensions have increased as Russia’s invasion continues to escalate, with no real sign of a peaceful resolution through diplomacy seeming possible. Ukrainian citizens continue to witness Russian airstrikes now for the fifth day as Russian troops move closer to the capital of Kyiv.

Both gold and the U.S. dollar gained strength today but it was gold that was favored as the go-to safe-haven asset. As of 4:50 PM EST gold futures basis, the most active April 2022 contract is currently up $22.60 or a net gain of 1.20% and fixed at $1910.20. The entire precious metal complex traded on the future’s exchange except for platinum scored significant gains in trading today. Palladium once again realizes the largest percentage gain as a vast majority of the global production of palladium occurs in Russia. Palladium gained 5.58% or $131.80 and is currently fixed at $2492.50. Silver gained just over 2% (+2.05%) and after adding today’s $0.49 gain is currently fixed at $24.51. 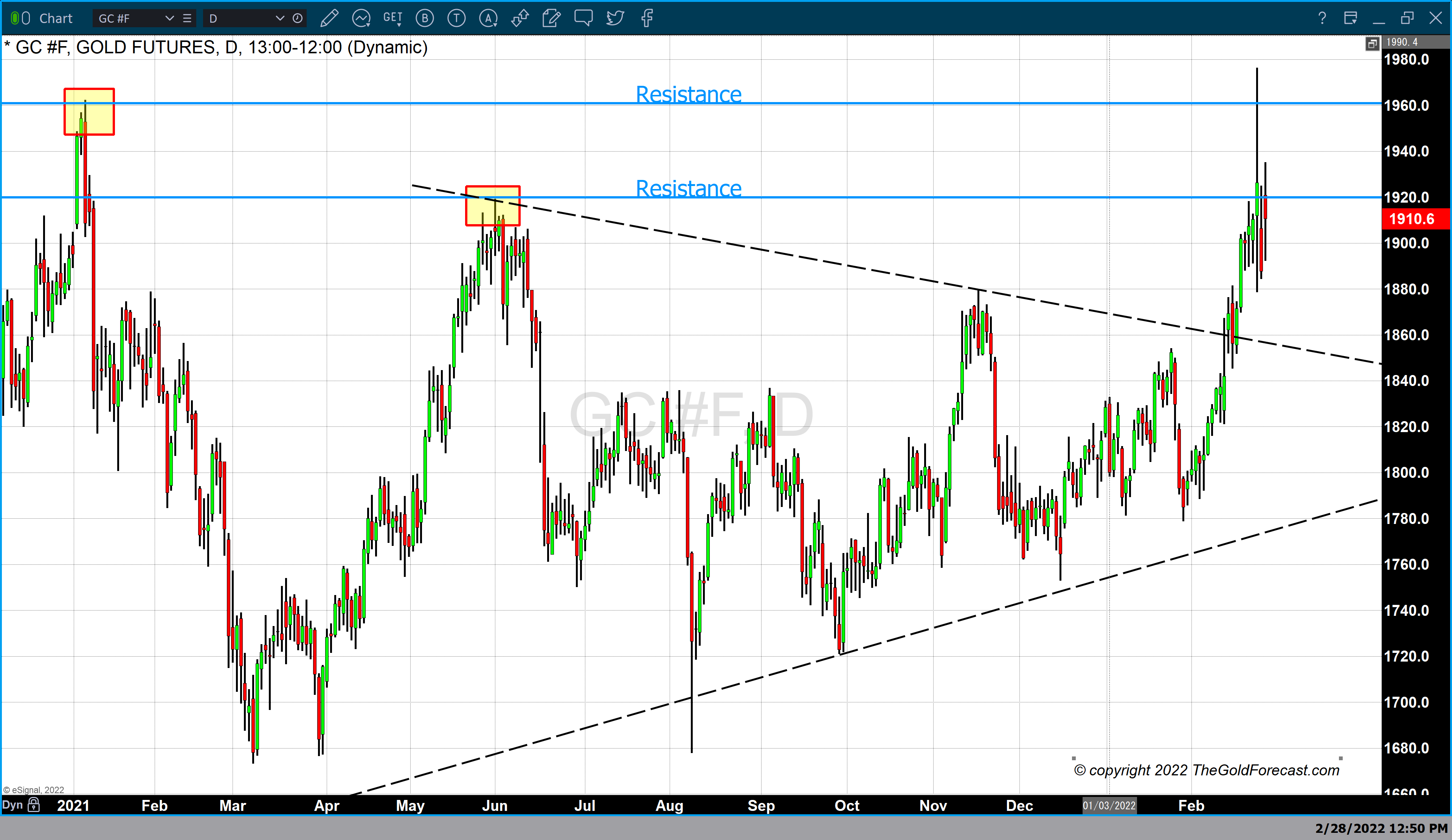 Although Russia and Ukraine held diplomatic talks today the stalemate continued as Russia has made sharp and unrealistic demands before they would consider withdrawing their troops from the sovereign country of Ukraine. One of the demands from Russia is that Ukraine assures them that they will not join NATO. However, today Ukraine applied to join the European Union and NATO, which almost guarantees that a peaceful solution through diplomacy will not be the outcome of any talks between those two countries.

The massive shelling has escalated especially in Ukraine’s second-largest city of Kharkiv. Russia’s brutal attack on Ukraine has resulted in numerous deaths which were illustrated with a shared video from the Ukrainian interior ministry advisor Anton Gerashchenko which showed multiple flashes in the sky and a smoke-filled background acknowledging that dozens have been killed and hundreds have been wounded.

Along with multiple large corporations, the Western world has shown support and has been actively sending aid to facilitate the brutal premeditated invasion of Ukraine.

The bottom line is that demands by Russia will not be met by Ukraine, and Ukraine’s demands that Russia withdraw are highly unlikely to occur. With the Ukrainian application to NATO, the invasion by Russia has had the opposite effect of what Vladimir Putin had hoped to achieve and, if anything, has put Russia’s world standing much lower because of the premeditated invasion. As sanctions begin to kick in, citizens of Russia will begin to feel a harsh reality of the recent action of the Russian president.

All things being equal, as long as the invasion and brutality by Russia continue to escalate and America, Canada, and EU countries continue to support Ukraine, it appears that the fighting in Ukraine will get much worse before it gets better. That fact will continue to support safe-haven assets specifically gold taking the precious yellow metal to yet higher prices.