Now on its sixth day, the premeditated invasion of Ukraine by Russia has been met by fierce resistance by Ukraine’s military and the civilian population as they defend their country. It has also united Democratic countries globally to condemn the egregious actions of Vladimir Putin by implementing the strongest sanctions ever issued. The European Union, United States, Japan, and Canada have formed a coalition to pressure Putin to cease his military action. Even the neutral country of Switzerland joined the worldwide alliance applying sanctions meant to cripple Putin and the Russian economy in hopes that Putin would back down.

The combination of defiance by the soldiers and citizens of Ukraine and sanctions have hardened Vladimir Putin, causing him to accelerate the invasion. He has now ordered the targeting of Ukraine’s civilian population. According to reports, missiles have rained down upon Ukraine’s second-largest city, Kharkiv, and a column of Russian troops and military vehicles 17 miles in length edges closer to the capital city of Kyiv.

A peaceful solution to the crisis in Ukraine seems implausible, if not impossible. Russia has drawn a line in the sand, emphatically stating that they would not withdraw their military presence unless Ukraine commits to not joining the NATO alliance. Yesterday Ukrainian President Zelenskiy applied to join the European Union and NATO. Both countries have drawn lines in the sand, making a diplomatic solution unattainable.

Russia continues to face ever-increasing international isolation. Worldwide protests, including Russia, have condemned his action. It seems that Putin’s actions have backfired and resulted in the opposite of his intended end game as Ukraine has now applied to join European Union.

The Russian military is now targeting civilians is proof that Putin’s statement that he ordered a “special operation” of peacekeepers to protect pro-Russian separatists in eastern Ukraine was nothing more than an excuse to invade and take over a sovereign country.

The financial repercussions from his actions have sent ripples through the financial markets, with global equities having major declines and crude oil now priced above $104 per barrel. Russia’s military action has increased inflationary pressures worldwide. Before the invasion inflation was at a 40-year high at 7.5% in the United States, the combination of crude oil priced over $100 per barrel and spiraling food costs most certainly will increase inflationary pressures worldwide. 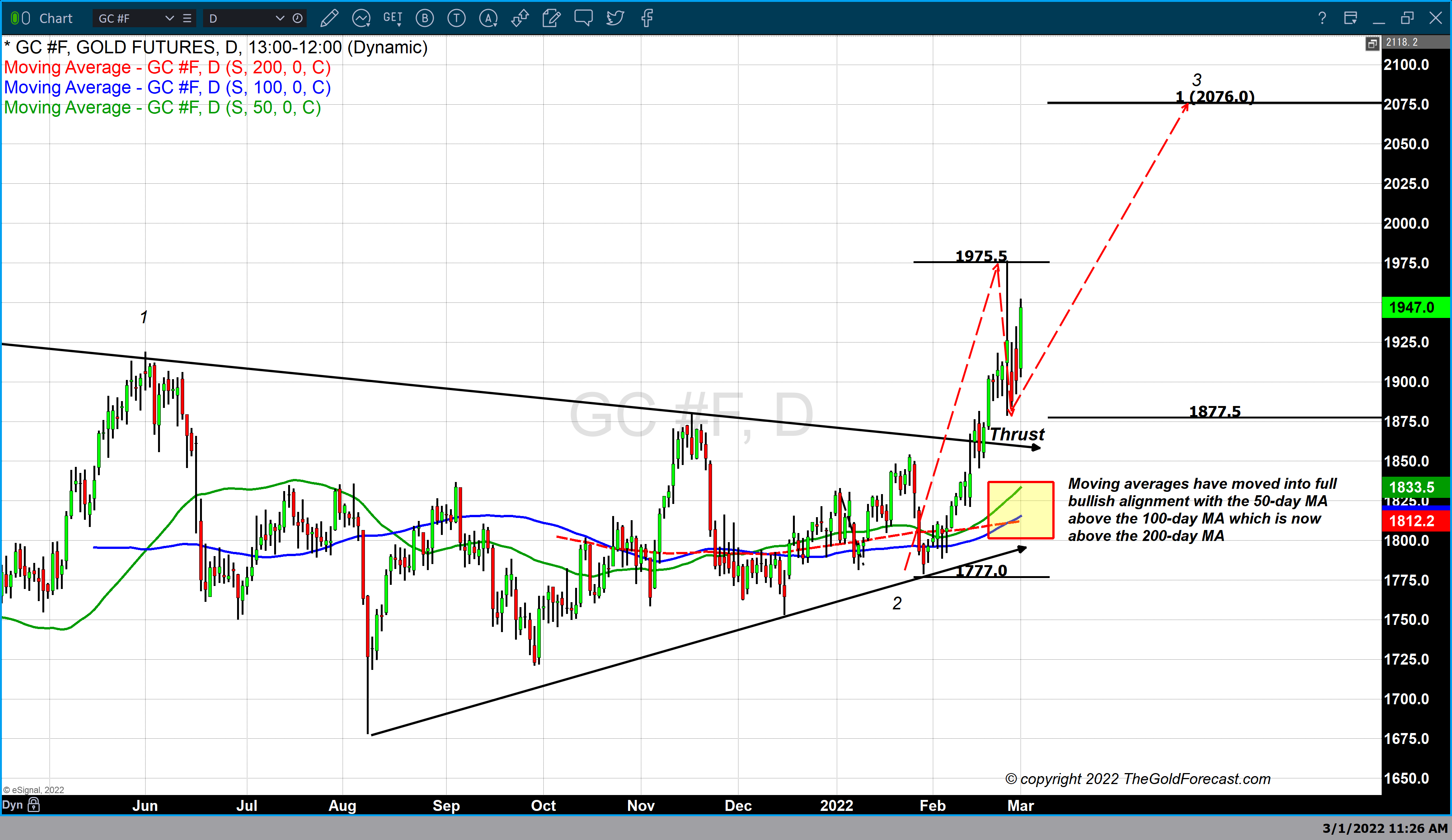 A flight to safe-haven assets by market participants is a direct result of the Russian invasion and rising inflation levels, with gold prices continuing to move higher in an almost parabolic fashion. As of 4:05 PM, EST gold basis most active April 2022 futures contract is fixed at $1951.20 after factoring in today’s price advance of approximately $50. Based on our technical studies, the first level of resistance that gold could encounter is at $1975, the high that occurred on Thursday, February 24, when Russia began its invasion. With the current inflationary pressures rising and the crisis resulting from Russia’s illegal invasion of a sovereign nation, it seems highly plausible that gold could reach over $2000 per ounce. Our current studies using Elliott wave and Fibonacci extensions forecast gold could trade as high as $2075 during this current rally.

Our hearts and prayers go out to the citizens of Ukraine.