Today gold prices declined as Russian and Ukrainian diplomats met to negotiate an end to the war. We are seeing the same reaction that occurred during their first round of negotiations, which was a softening of gold pricing and then a return to a rally mode once it was apparent that the negotiations ended in a stalemate. The fact is that there is little to no common ground between the two sides. Ukraine and Russia have opposite intentions for a peaceful resolution of the war. The only common element that they want is for the war to end. 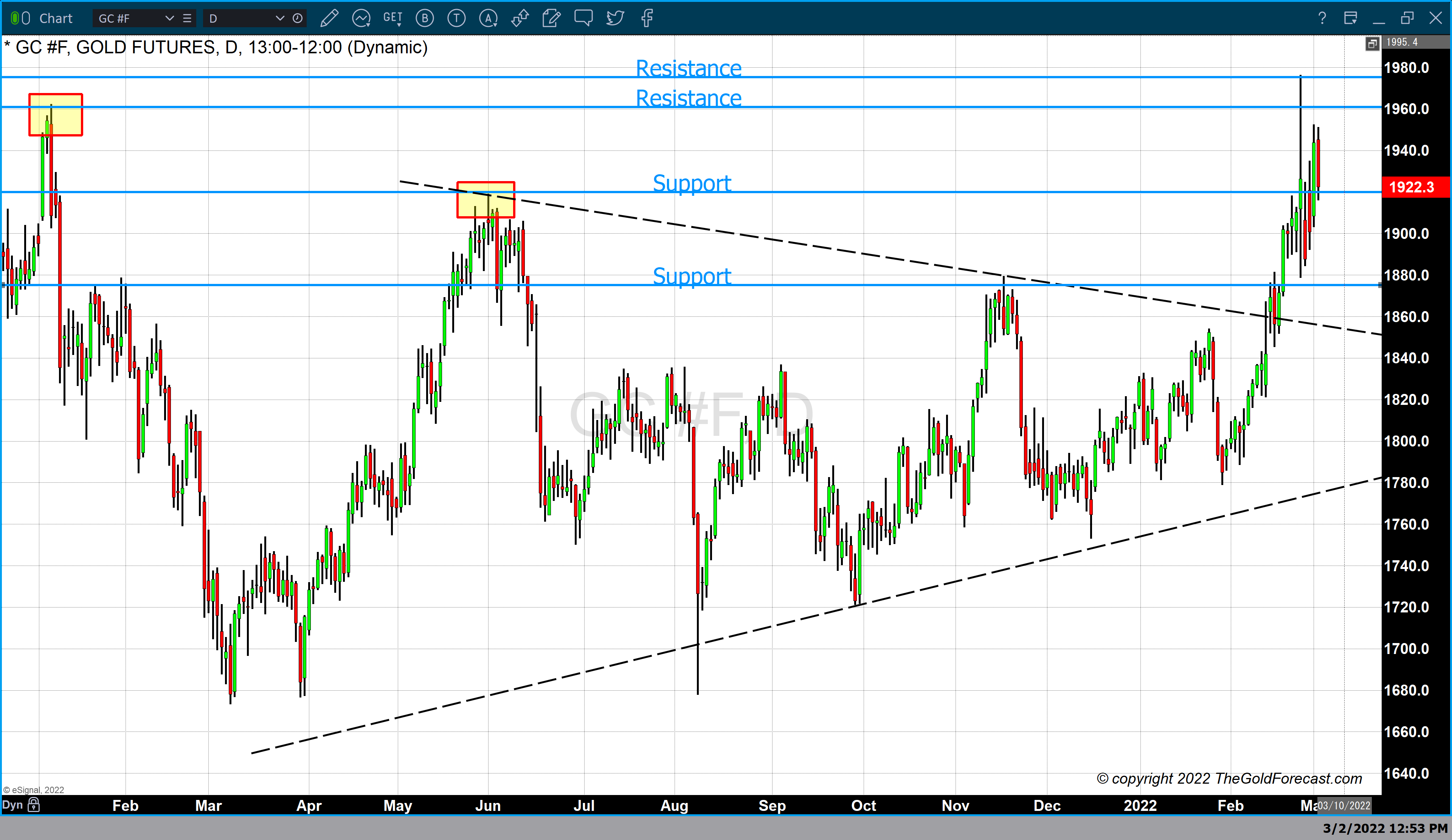 Both sides have drawn hard lines in the sand that are the opposite of the desires of the other side. Russia is adamant that their invasion will not end unless Ukraine firmly commits that they will not seek to align with the EU or NATO. This is an un-negotiable component that Putin demands.

Ukraine wants Russian troops to stop the invasion which has led to death & destruction. Ukraine rightfully claims that its sovereign country was invaded without provocation. Their military response was justified to defend themselves. Russia attacked Ukraine because of Ukraine’s desire to become aligned and join the European Union.

There is a clear distinction between actions by Russia and Ukraine. Russia is the aggressor, and Ukraine has simply been put in a position to defend itself against a superpower. No sovereign country has the right to exert its will on another country by coercion or force! This is why other countries have stood up for Ukraine.

The coalition of countries standing up against Russia have implemented extremely harsh economic sanctions, yet have committed not to put troops on the ground in Ukraine.

That being said, and with such hard lines in the sand, a diplomatic solution is close to impossible. The obvious fact is that neither side will bend their current position. It is Russia that is attempting to impose its will on a free and sovereign country and that is the dilemma. This means that the talks will end in a stalemate and Russia will have to decide whether to acknowledge that they have no right to impose their will and withdraw or carry the burden of ever-increasing isolation and sanctions by a large coalition of countries imposing sanctions to force the Russians to withdraw.

It is for that reason that Russia will continue and escalate its military actions causing more death and destruction (I pray I that I’m wrong). This would be highly supportive of the safe-haven assets that have moved aggressively higher during this crisis. I do not believe today’s price decline was technical but simply a pause as Ukraine and Russia met for negotiations. I would expect gold as well as silver to return into full rally mode if in fact there is no positive outcome from today’s negotiations.