The $1915 level in gold re-affirmed its resilience as support, having been tested yet again intraday yesterday.

Perhaps the strength in gold has begun leaking into silver, which outperformed gold intraday; the signs of that catch-up trade are beginning to manifest. Platinum bulls broke price through $1065 again, and should expect some congestion between $1100 and $1035. Palladium leads the complex, trading up to $2780 overnight, putting in another higher high, dating back to its December low.

Stocks caught a huge bid yesterday and futures indicate a flat open this morning. Equity indices moved up almost in lockstep with the selling in U.S. Treasuries, as the 10-year yield made its way back up to 1.86%. This could indicate that, indeed, the flow of cash is to move out of safe-havens, tip-toeing back into risk.

Jerome Powell assured the market yesterday that the 50bp rate hike floated out by the FOMC is off the table for March. He also affirmed his belief that the originally telegraphed 25bp hike for March is now priced in, which may reinforce conviction in contrarian stock bulls that a market bottom is in, or close.

All market participants should remain open to excessive volatility in either direction, with early peace talks beginning in eastern Europe and U.S. jobs data scheduled for release tomorrow morning. 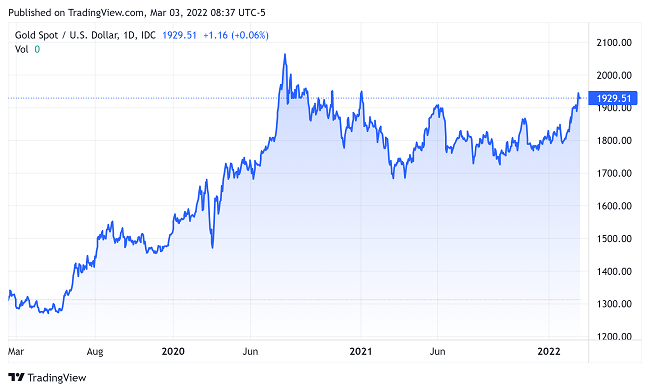