Gold looks to be in the midst of a historic breakout.

I have written quite a bit about Gold’s super bullish cup and handle pattern, which has a measured upside target of $3,000 and a log target of roughly $4,000.

To understand the significance, one should study similar historic breakouts in Gold and the stock market.

The stock market has had three historic breakouts over the last 80 years.

In late 1949 the stock market began a move in which it would break out of a cup and handle pattern and surge 278% over the next eight years.

Most recently, in 2013, the stock market broke out of a 13-year base. Because it was quite extended in terms of valuation and previous gains, it gained only 100% over the next five years. 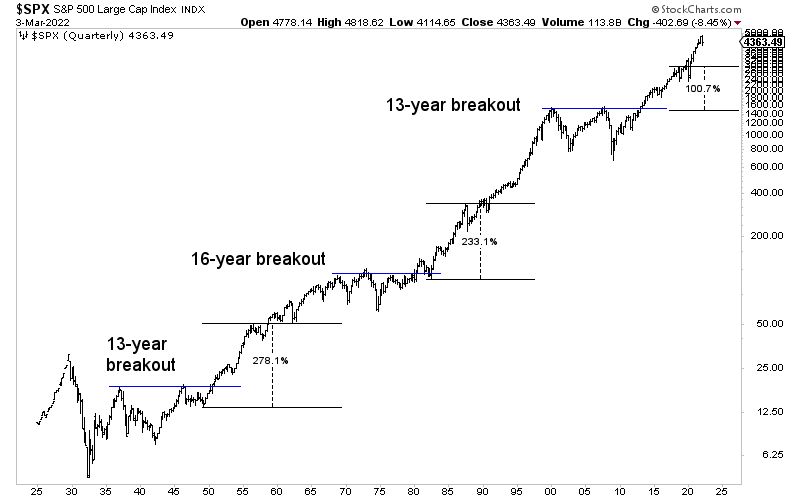 Gold's history is not quite as clean, but we can see the significance of multi-year breakouts.

When President Nixon ended the Gold Standard in 1971, Gold soon exploded out of a 25-year base. The Gold price was artificially low then, and that's why it exploded over 450% in a little over three years and, from that high, quadrupled over the following six years.

The next significant multi-year breakout in Gold occurred in 2005. Gold gained almost 150% in less than three years and 360% over a little more than six years. 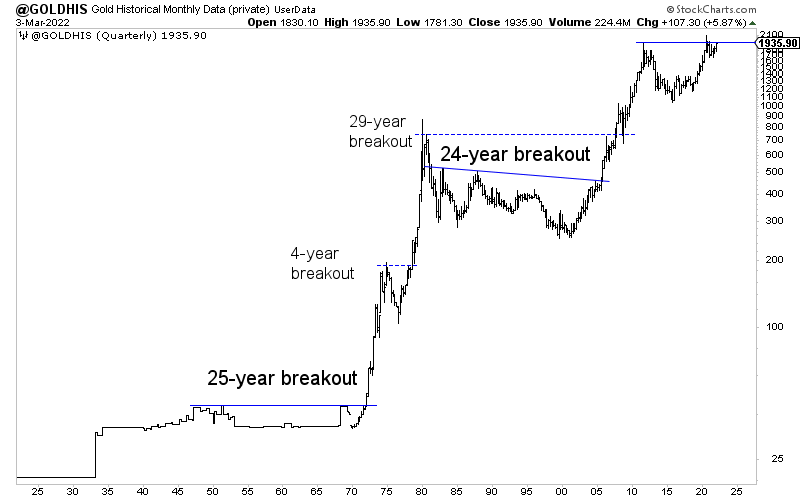 These historical, multi-decade breakout moves did not last for only a year or two.

They lasted for eight, five, and five years in the stock market. The two major breakouts lasted three and six years before a major correction in Gold.

Gold's aforementioned cup and handle breakout targets could be achieved in two or three years, but the history of these major breakout moves argues that this move will extend in both price and time.

Just imagine when Silver breaks away from an over 40-year base at $50.

In the past week, I highlighted two silver stocks for subscribers with the potential to be 10-baggers at $50 Silver.