Gold gaining awareness? or just further geo-political bid? or both?

We're wrong to this point as regards the price of Gold fading after spiking on RUS' invasion of UKR. Which starkly tells us how serious this incursion is versus that from eight years back in 2014.

Now 24 trading days into this year's intimidation and physical offensive by RUS, Gold has yet to commence its typical geo-political fade as had occurred 16 days into the Crimean Peninsula assault.

Here's the updated comparative graphic of the two Gold percentage price tracks from then and now. Obviously this time 'round 'tis all far more barbaric, wantonly destructive and deadly. Better than 20 years of post-Soviet democracy and credibility-building with the West has vanished in less than 20 days, in turn putting Gold on full-alert as it continues to ascend rather than fade: 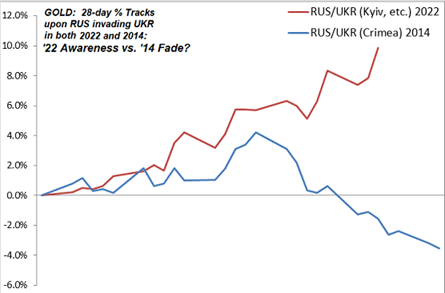 A threat to the free world notwithstanding, for all intents and purposes, RUS is now essentially done and financially isolated for the foreseeable future. Whether the world's largest country can civilly reinvent itself from within remains to be seen for what realistically may be years.

As for "The Now", the country's currency is essentially worthless, it having inflated (vis-à-vis the USD) +42% just year-to-date, and +72% since the start of 2020. And as you likely now know, its Central Bank just doubled its interest rate from 10% to 20%. Moreover, when Switzerland allies with the West in sequestering RUS' securities, this is serious.

We oft put forth that geo-political underpinning is not the Gold positive by which we seek price to rise. Rather, the debasement of currency is the right and lasting fuel by which Gold prospers in maintaining real wealth for its holders. To be sure, with Gold having settled yesterday (Friday) at 1975, 'tis but 114 points (or 5%) below its All-Time High of 2089 as traded on 07 August 2020. Further with nearly 10 months still to run this year, Gold is now "only" 279 points (or 12%) below our forecast high for 2254 in 2022. Indeed year-to-date, price already is +8%. As well from the "And Beyond Dept.", Gold remains a fair piece from its present-day debasement value of 4049 per the Scoreboard: but one "leap" at a time.

Our still being "in motion" has us leaping about, so let's straightaway get to the graphics. Credit Oil with the "Leap of the Week" per its +25.1% lurch. Still Gold leaped +4.5% since this time a week ago, the high being the stated settle at 1975, just two points below the prior week's high of 1977. Here are the weekly bars from one year ago-to-date, the parabolic Long trend still intact, and at 18 weeks now ninth in duration of the 44 Long trends this century: 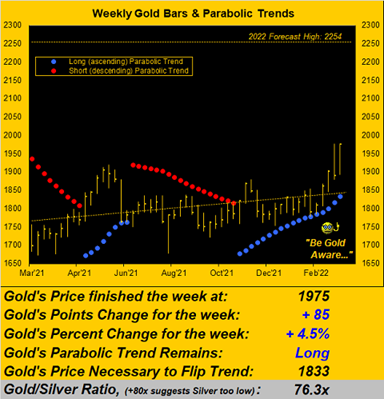 More broadly in looking back across these past 12 years, here we've Gold by the day, the 2089 All-Time High not too far away. The rightmost price acceleration is visually substantive:

With that as fact, should Gold fold as the geo-political story gets old, we sense enough renewed "awareness" that structural support (as cited a week ago) from 1854-to-1779 ought hold.

Hardly can one deem the RUS/UKR conflict as "old", but it is getting competition from other FinMedia musings. In opening this past Thursday's Prescient Commentary, we penned: "...Of note as the RUS/UKR invasion intensifies, it is slipping from the lead FinMedia headlines as oft occurs with geo-political events upon their assessed as being part of the norm..." 'Tis a "norm" nobody wants, but nonetheless RUS has sadly down-shifted The World a gear.

Within the mélange of: RUS/UKR; inflation jitters; Federal Reserve executives unanimously on the threshold of raising their Funds Rate; and US/PRC trade policy coming to loggerheads, Dow Jones Newswires notes in spite of it all that "...the economic expansion appears to be on solid ground..." And the Economic Barometer did have a sound week; however year-over-year, you be the judge:

Too, whilst February's job creation and January's upside revisions were robust, Hourly Earnings were flat: "Ya ain't gettin' a raise, but life costs more; have a great day."

Which in turn allows us to exemplify "awareness" of Gold as stated in this week's title. Here we've the two-panel graphic featuring Gold's daily bars from three months ago-to-date on the left and its 10-day Market Profile on the right. And you know the drill: when the baby blue dots of linear regression trend consistency rise above their +80% axis, that is uptrend confirmation, be it by stagflationary/debasement awareness, geo-political conflict, or both. And by the Profile, welcome to the trading support of the 1900s. 'Course, that doesn't preclude the aforementioned 1854-to-1779 support structure being revisited should the geo-political fade trade be played. But for the present, "Be Gold-aware, or be square!": 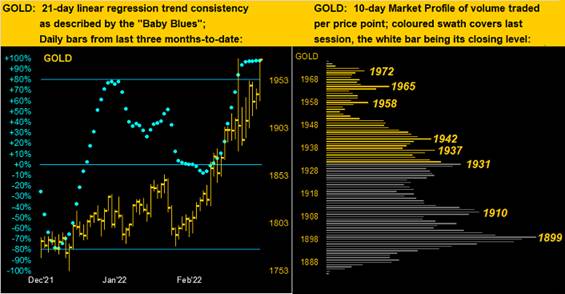 And doesn't Silver look well across the same graphical set, fully bedecked in her precious metal pinstripes. No industrial metal jacket these days for Sister Silver, albeit credit, too, Cousin Copper having just reached an all-time high at 4.949/pound. All-in-all, a sterling view for Silver: 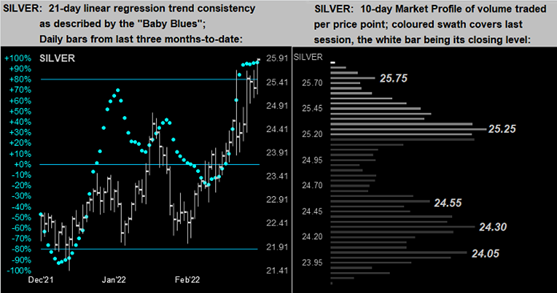 We'll wrap it up here StateSide with this inflation observation: it is absolutely rampant in California, be it up at Squaw (oops, sorry, "Palisades Tahoe") or down here in San Frans**thole:

■ And the cost of gasoline, whilst cheaper here, is of a greater percentage of the European price than we can remember.

As a bank colleague once remarked: "If you don't make at least $120,000/year, you'll die here." Now we can believe it. So be it by awareness, geo-politics, or both, don't see your wealth die, rather, live well with Gold!