Bitcoin is needed as an alternative

The recent war climate has created a higher demand for bitcoin. Even more apparent became Bitcoin´s use for wealth preservation. And there is another aspect that will likely come to the forefront. Leading currencies need to flow freely to fulfill their supreme rule as a means of exchange. The value of a world currency gets diminished, once sanctions are imposed. Of course, competition is evoked to create a medium that can be used as a payment method. The competition between different nations has been ongoing for years to publicize their digital currencies. Yet, this urgency has been underlined by the current political environment. Bitcoin is needed as an alternative

The weakened US-Dollar and the present unexpected climate seems not being fully reflected in bitcoin´s price. Consequently, bitcoin prices could soar in the not too distant future. 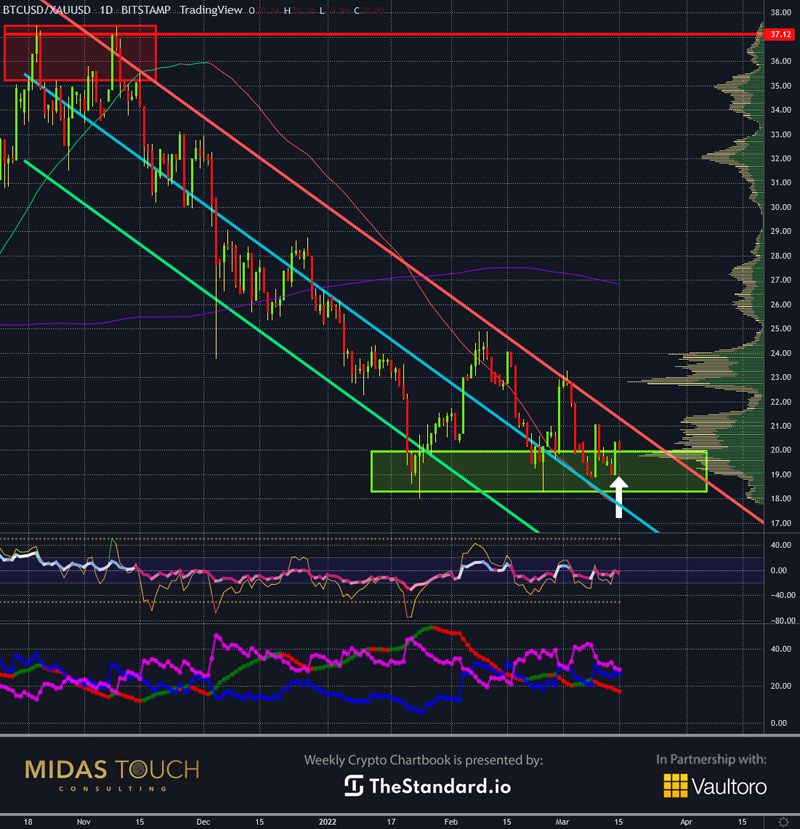 A phenomenon in times of crisis is that individuals look for absolutes or extremes to resolve difficult circumstances. We instead advocate a more principle-based process of solving problems, an approach of choices. Regarding wealth preservation, this would mean gold and silver alongside bitcoin.

The daily chart of the bitcoin/gold-ratio shows the bottom building after a downtrend. Currently, one can purchase a bitcoin for twenty ounces of gold. Nearly half as much as five months ago. Indeed, an opportunity to rotate one's precious metal holding partially into a cheap bitcoin acquisition. 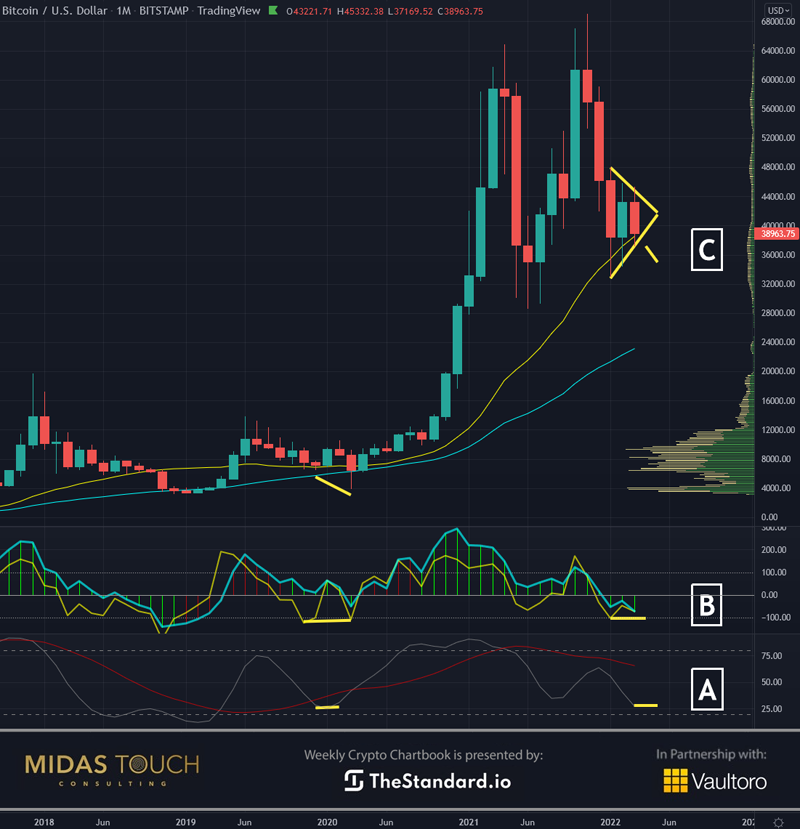 War inherently divides nations, and that does not mean limiting only the ones directly in conflict with each other. It is this divide that, in addition, fuels the competition for each nation to be first in their digital currency release. Sanctioned countries have limited access to the US-Dollar. Consequently, they are highly motivated to create an alternate payment method.

The monthly chart is not showing this fundamental support for bitcoin. Early signs of a triangle show that we find likely to break to the upside. Slow stochastic indicator reading (A) shows that the last time around at these levels, a strong up move followed. Similar to the yellow CCI turbo line-level reading (B). Before such a move, we witnessed a quick price spike down (C), which would be no surprise.

Bitcoin, weekly chart, bitcoin as an alternative is needed: 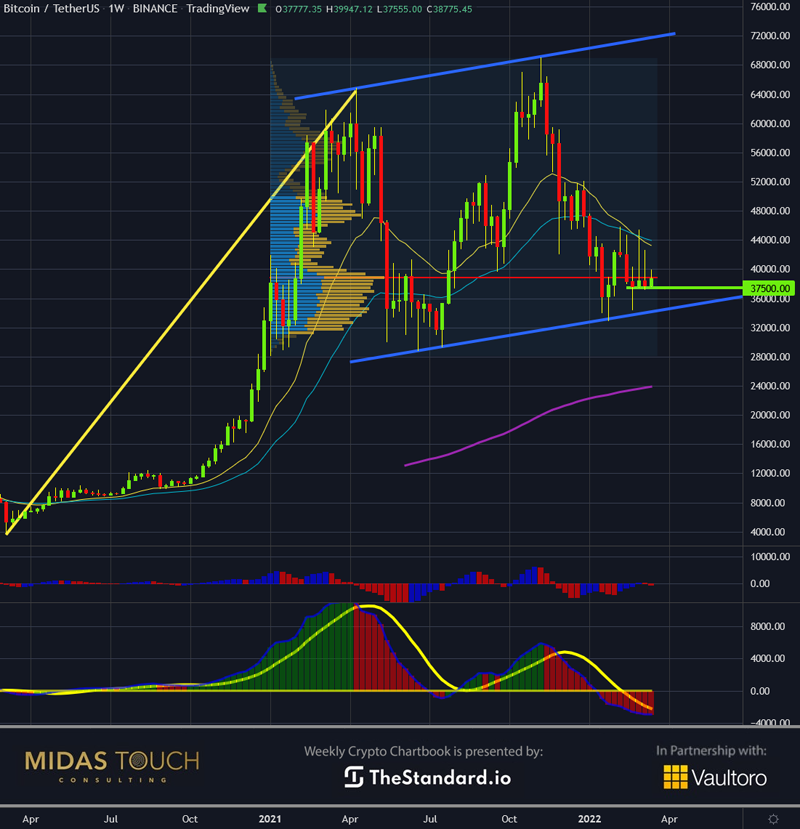 Zooming into the weekly time frame, we can make out the battle between bulls and bears in more detail. Over the last three weeks, prices were rejected above the POC (point of control = high volume node, where our volume profile analysis ranges over the previous fifteen months). As well, price behavior is reflecting the war climate's uncertainty. At the same time, the bulls have held steady any attempt of the bears trying to push prices below US$37,500. Hence, we should see a substantial move once trading snaps out of this "magnet trading" to the high-volume node. 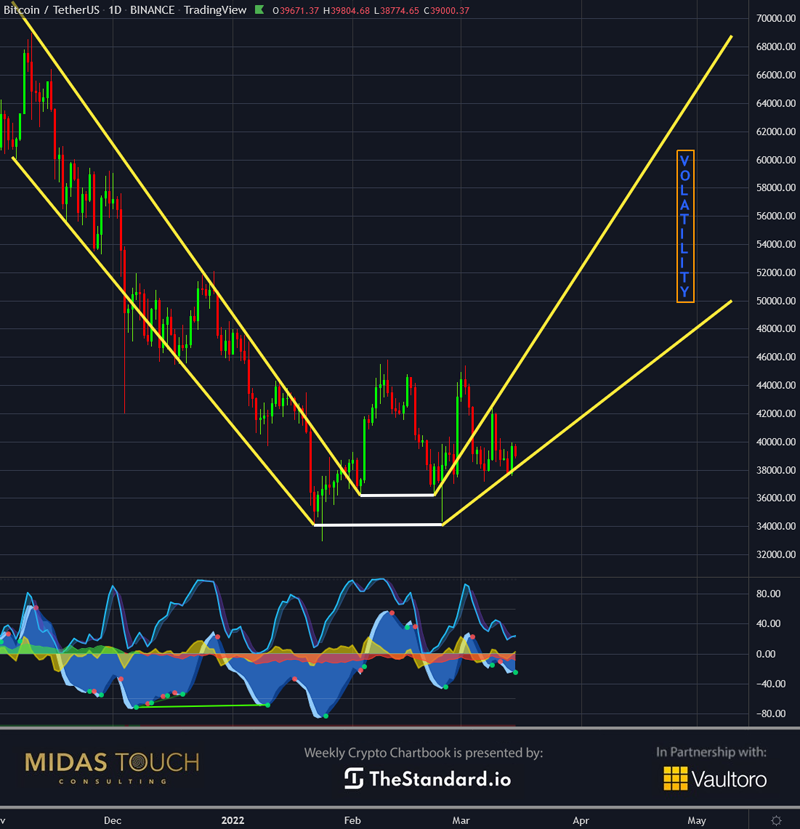 The daily chart of bitcoin above describes how we see the future unfold. We anticipate the price to reach all-time highs within the upcoming month. Unfortunately, not in bitcoins typical swing trading manner. We foresee a choppy, volatile market. Consequently, short and midterm trading will be challenging. Stepping up in time frame is a helpful approach to avoid the noise.

Bitcoin is needed as an alternative:

Governments will try to keep their monopolies and power. However, we don't think that the adoption of a digital dollar by the masses will not be that easy. We find this especially true to be in a highly transitory time of rapid changes and many challenges.

Typically, multiple propaganda waves through media have bridged such doubt but might have lost some of its trustworthiness. Consequently, bitcoin has a fair chance for mass adoption just as well. It already has a history and carries inherent features of freedom that people might long for more than anticipated.