Be the first to know when a new trade signal is out! Click here to sign up for e-mail notifications.

PGM markets have been extremely volatile over the past three weeks, in large part as western investors, fabricators and others have worried that the western sanctions against Russia might lead to an interruption in Russian exports of platinum, palladium, and rhodium essential to global auto production and sales, at a time when the global auto industry is struggling to recover after the 2020 economic lockdown.

Such interruptions seem unlikely at this time, given the mutual dependence on these exports and imports to both Russian entities and the economies of Europe, North America, and Asia.

This is reminiscent of global auto industry and government attitudes toward PGM supplies in the 1970s and 1980s, when the world's auto industry was almost entirely dependent on PGM supplies from two countries with political stability issues: The Soviet Union and South Africa.

It was in this environment that CPM's analysts began studying PGM markets in the late 1970s, at a time when Soviet PGM production and export data were state secrets and South African producers did not even publish their annual production figures. Given the combined background of CPM analysts in both PGM and other commodities market research (including Soviet and Chinese oil and gas industries) and their expertise in studying Soviet and Chinese economics, politics, and commodities industries, they were ideally suited to undertake this research, at a time when no other entity was publishing PGM market reviews.

CPM has been producing PGM market research ever since and has racked up an incomparably good track record in estimating and projecting PGM supply, demand, and prices. The chart below shows CPM's published platinum intermediate-term (1 – 5 year) price projections, based on its supply and demand analysis, along with its projections of global auto industry growth trends, Russian and other market and industry developments, and the economic and political outlook worldwide. 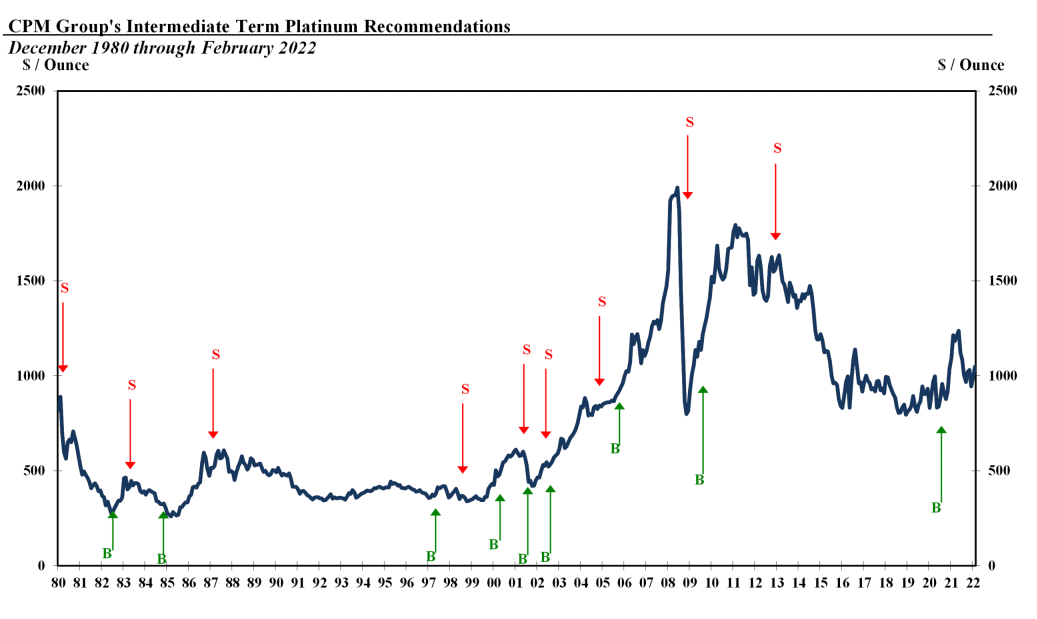 No other company has continually produced proprietary supply, demand, inventory, and other statistics, edata, and analysis on PGM markets since the late 1970s. Furthermore, other groups that produce such data today primarily are either owned by producers or refiners, or provide their statistics primarily through industry trade groups that promote platinum to investors.

CPM is the only fully independent research consulting company that produces accurate data and analysis on PGM markets: Not just historical estimates but also projections.

The early 1990s saw South Africa transition to a multi-racial democracy and the dissolution of the Soviet Union, which led to a relaxation of auto industry and government concerns about global dependence on these two countries for PGM supplies.

Russian PGM supplies were 'choppy' during the immediate post-Soviet 1990s, but stabilized around 2000 – 2001. Until recently Russian PGM exports were not a concern in most quarters. Now they have resurfaced as an issue of immediate concern. Suddenly in the past three weeks the short and long-term stability and reliability of Russian PGM supplies have commanded the attention of auto manufacturers and others who for a couple decades have been lulled by complacency by the impression of a stable post-Cold War globalized economy.

Meanwhile questions about long-term PGM requirements due to the transition away from internal combustion engines to electric vehicles or some other new energy over the past few years added to a market impression that in the near future EVs would fully replace petrol and diesel powered vehicles, wiping out auto industry demand for PGMs that accounts for 66% of global palladium demand, around 48% of world platinum demand, and 85% of world rhodium use.

CPM's long-term PGM supply, demand, and price projections laid out in the PGM Projections to 2050 report are that the most likely scenario is for a long-term energy transition will not see EVs fully replace petroleum-powered vehicles until well beyond 2050. By 2050 perhaps half of the world's vehicles will still be using petroleum-derived fuels and will still require PGMs to clean their exhaust. CPM's conclusions are more realistic if less optimistic for EVs and the environment than those of many mining and metals marketing groups but are broadly in line (if not a bit more conservative than) the most likely energy projections developed by the independent and unbiased International Energy Agency.

Meanwhile, the reliability and even availability of future Russian PGM supplies are now being called into question and re-examined. This conclusion, detailed in the 80-page CPM report, signals that large volumes of PGMs will be required for decades to come for auto and other catalytic converters.