Value might have been found yesterday physical commodity fundamentals the focus 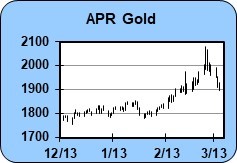 OUTSIDE MARKET DEVELOPMENTS: Global equity markets overnight were higher in a catch-up to the very strong gains seen in the US on Wednesday. Critical economic news overnight included a month over month decline in Japanese machinery orders, a jump in Australian employment, a decline in the Australian unemployment rate, and Swiss trade figures showing a larger trade surplus. The North American session will start out with a weekly reading on initial jobless claims which are forecast to have a modest decline from the previous 227,000 reading. Ongoing jobless claims are expected to have a minimal decline from the previous 1.494 million reading. Earnings announcements will include Accenture and Dollar General before the Wall Street opening, while FedEx and GameStop report after the close.

We suspect that the sharp rally in gold and silver is partly the result of risk-on and hope for constructive talks between Ukraine and Russia, as a reduction in global anxiety could head off slowing/stagflation and allow inflation to gather pace. The downside extension in the dollar, a wave of short covering interest, and a $3-plus rally in crude oil adds to the bullish equation this morning. The gold and silver pressure yesterday was a result of the US shift to a cycle of higher interest rates, but that headwind is at least quantified. Shortly after the Fed news, economists begin to question the "dot plot" of seven rate hikes, with predictions the economy would not support that many. Even US Treasury yields have fallen from recent highs, adding to the outside market support for gold and silver. Another supportive development this week is a pattern of gold ETF inflows, with investors yesterday buying 354,730 ounces, bringing the year-to-date gain to 6.1%. Unfortunately for silver bulls, silver ETF holdings declined 2.6 million ounces yesterday, but they remain 1.2% higher year-to-date. In another positive development, Swiss gold exports for February reportedly increased by 4.6%, with most of the increase flowing to India, the world's second-largest consumer. A rough estimate of a full extraction of war premium from gold prices produces a target of $1,882, while a rough estimate from silver is down at $23.85. From a technical perspective, the gold market likely remains vulnerable a resumption of selling ahead, with the most recent Commitments of Traders report showing a spec and fund net long position of 352,000 contracts. However, since that data was collected, April gold has declined almost $150. Seeing gold soundly reject a probe below $1,900 earlier this week creates a potential value zone. Still, we are highly suspicious of the gold market's ability to climb above $1950 and for May silver to regain $26.00.

With palladium spec and fund net long nearly flat in the most recent COT report and prices at the low this week having declined $658 the time that data was collected, we estimate that the current net short is the largest since January. Therefore, we believe that the market's ability to consolidate above $2,350 for most of this week could result in a short covering wave. As in the oil market, sanctions on Russian exports were imposed very quickly, and they might only be beginning to impact on global commodity pricing. Like other markets lifted by the Russian embargoes, the palladium market has already removed a large portion of its war premium. Unfortunately for the bull camp, palladium ETF holdings declined 2,452 ounces yesterday, but they are still 2.8% higher on the year. The platinum market has not only removed what we believe was the war premium, it has fallen below where it was before fears of the invasion surfaced. Fortunately for the bull camp, platinum ETF holdings increased 11,993 ounces yesterday, but those holdings remain 3.1% lower on the year. We now see equilibrium value at $1,000, but those getting long should risk positions to $975.

MARKET IDEAS: Unless Russian overtures for reconciliation are followed up by further constructive talks, the short covering rally in gold and silver might fizzle out. The markets have factored in a measure of global slowing from the war and anticipated rates hike, and they are waiting for the next volley from the Russian president.

The relief rally has run out of momentum 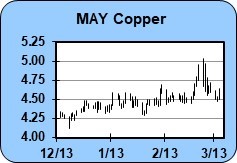 While it appears that the May copper contract forged a significant bottom with the spike down on Tuesday, a possible end to fighting in Ukraine probably won't be a sustained force for higher copper prices given the fickle nature of the Russian president. Given Putin's personality, saving face instead of achieving his objectives might not be good enough. However, the copper market should return part of its focus to Chinese demand, especially with Covid headlines remaining a negative force. Fortunately for the bull camp, the largest Chinese producer showed a net revenue increase of 40% in January off surging refined copper output, and that suggest a modest demand increase. On the other hand, we see fundamental resistance hanging over copper prices at this week's high of $4.6730. Surprisingly the copper market showed very little backlash following the Fed's forecast of seven 2022 rate hikes, and so far, copper has been largely immune to the massive washout in crude oil prices. In a minor supportive development, Southern Copper indicated it has resorted to importing copper and copper concentrates because of pinched supply flow from protests in Peru. It is also possible that the copper market leveled an overdone spec and fund long position with the $0.27 decline since the data was collected.

MARKET IDEAS: While the path of least resistance has shifted up, the ebb and flow of war news will continue to have a modest and impact on copper action. Uptrend channel support today is far down at $4.48, with a pivot point at $4.64.