Fed's actions will affect gold. Are there any positives?

The Fed will want to keep inflation under control, and that could have miserable consequences for gold and miners. Will we see a repeat from 2008?

The question one of my subscribers asked me was about the rise in mining stocks and gold and how it was connected to what was happening in bond yields. Precisely, while short-term and medium-term yields moved higher, very long-term yields (the 30-year yields) dropped, implying that the Fed will need to lower the rates again, indicating a stagflationary environment in the future.

However, the market might have moved ahead of itself by rallying yesterday. After all, the Fed will still want to keep inflation under control (reminder: it has become very political!), and it will want commodity prices to slide in response to the foregoing. This means that the Fed will still likely make gold, silver, and mining stocks move lower in the near term.

In particular, silver and mining stocks are likely to decline along with commodities and stocks, just like what happened in 2008.

Speaking of commodities, let’s take a look at what’s happening in copper.

Copper invalidated another attempt to move above its 2011 high. This is a very strong technical sign that copper (one of the most popular commodities) is heading lower in the medium term.

Yes, it might be difficult to visualize this kind of move given the recent powerful upswing, but please note that it’s in perfect tune with the previous patterns.

The interest rates are going up, just like they did before the 2008 slide. What did copper do before the 2008 slide? It failed to break above the previous (2006) high, and it was the failure of the second attempt to break higher that triggered the powerful decline. What happened then? Gold declined, but silver and mining stocks truly plunged. The GDXJ was not trading at the time, so we’ll have to use a different proxy to see what this part of the mining stock sector did. 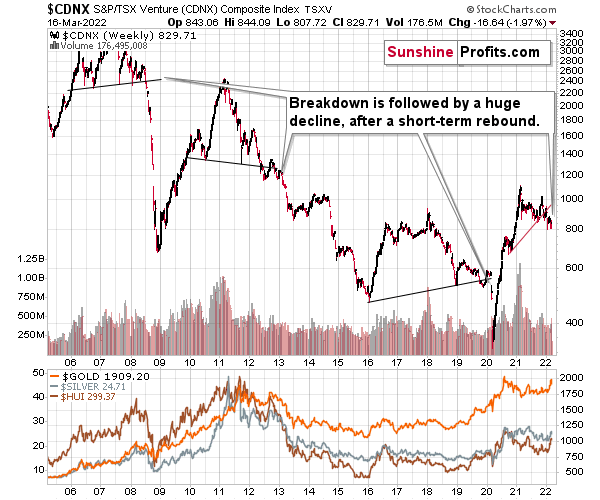 The Toronto Stock Exchange Venture Index includes multiple junior mining stocks. It also includes other companies, but juniors are a large part of it, and they truly plunged in 2008.

So, what’s likely to happen? We’re about to see a huge slide, even if we don’t see it within the next few days.

In fact, the outlook for the next few days is rather unclear, as different groups of investors can interpret yesterday’s developments differently. However, once the dust settles, the precious metals sector is likely to go down significantly.

Gold is up in today’s pre-market trading, but please note that back in 2020, after the initial post-top slide, gold corrected even more significantly, and it wasn’t really bullish.

This time gold doesn’t have to rally to about $2,000 before declining once again, as this time the rally was based on war, and when we consider previous war-based rallies (U.S. invasion of Afghanistan, U.S. invasion of Iraq, Russia’s invasion of Crimea), we know that when the fear-and-uncertainty-based top was in, then the decline proceeded without bigger corrections.