Gold's spike and fade has played

Near-term negatives notwithstanding, 'tis fair to finally say that Gold's geo-political spike and anticipated fade have played. Courtesy of the "Turn off the TV and Look at the Data Dept." we'll start with the below year-to-date chart.

RUS' invasion of UKR commenced on 24 February, Gold opening that day at 1912 per the labeled line. Price rightly spiked onward to 2079 -- just 10 points shy of its 2089 All-Time High (07 August 2020) -- and then faded as anticipated to a pre-war low per this past Wednesday at 1895, irrespective of the incursion continuing to rage. 'Tis what Gold does:

In settling out the week yesterday (Friday) at 1922, we've highlighted in the above chart an "underlying support zone" should price reach lower still into the 1854-1779 region.

Ahhh, Squire. We missed you popping in during our recent peregrinations. First let us say that fundamentally Gold's "awareness" has expanded -- albeit sadly -- given the war, but in stride as well with inflation's glide. Moreover: the BIG PICTURE view remains price achieving our forecast 2254 this year (per the very analysis laid out in the 01 January missive "Gold 2254 in Year 2022"), not to mention Gold's currency debasement value today being 4058 by the opening Scoreboard. Second though, technically let's point to two near-term Gold negatives via the following dual-panel chart.

Below on the left is one of the most visibly-followed technical studies in the history of, well, technical analysis. 'Tis the mouthful "moving average convergence divergence" ("MACD", thank you G.A.) for the daily closing price of Gold, shown here from 2021-to-date. The rightmost negative MACD crossover signal (blue below red) was confirmed per Wednesday's open at 1920: the average downside follow-through of the 11 prior such negative signals is -67 points. Thus in that vacuum: 1920 - 67 = 1853, which is just barely into Gold's aforeshown 1854-1779 "underlying support zone". Then on the right are our very familiar "Baby Blues" of the grey trendline's consistency now in full plunge for Gold's daily bars from one month ago-to-date. All that despite the Gold hype button being hammered hard -- and honestly with good fundamental reason -- across these past several weeks. Regardless, the market is never wrong, Gold again succumbing as it "always does" following geo-political spikes:

So with the war spike and fade duly laid, let's next look to Gold's weekly bars from a year ago-to-date. The rising blue dots of parabolic Long trend have just completed their 20th week on this run, ranking such stint in a tie for seventh by duration century-to-date. The ensuing week's "flip-to-Short" level of 1889 obviously is well within the reach of above two near-term negative technicals playing out, especially given Gold's "expected weekly trading range" is coincidentally now 67 points. So unless price gets off its derrière, it can be down there when we again meet next week: 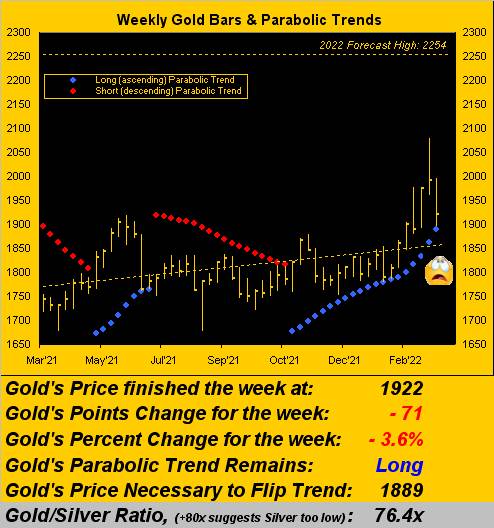 As for stagflation, clearly 'twas exemplified by the Economic Barometer's fall for the week, the S&P 500 ironically (or better put, blindly) rising in concert:

Therein for March, the Philly Fed Index did improve, but the New York State Empire Index went negative and the National Association of Home Builders Index slipped below 80 for the first time in six months. February's Housing Starts improved, but Building Permits slowed; Export/Import pricing favoured the U.S., and Capacity Utilization clicked up a few ticks ... but Industrial Production slowed, wholesale inflation rose, and both Existing Home Sales and Retail Sales came down off January's rails.

Returning to Gold, here below left we've the three-month version of the daily bars with the falling Baby Blues seen earlier, plus below right the 10-day Market Profile with present price (the white bar at 1922) having faded as much -184 points post-spike:

And in sporting her precious metal pinstripes, poor ole Sister Silver hasn't fared much better, at left her Baby Blues slipping too, whilst at right her -10.7% Profile price plunge in just seven days the worst for such stint since 01 December 2021:

To wrap ahead of a quiet week for incoming data:

■ The StateSide Senate Banking Committee this past Wednesday saddled up Jerome "Jumpin' Jay" Powell for renomination to continue chairing the Federal Reserve along with trusty sidekick Lael "The Brian" Brainard for Vice-Chair; (no word on positioning for Trigger nor Buttermilk).

■ And save for a brief "safe haven" (hilarious) bid at the commencement of COVID, the Dollar Index has not traded above its 100 level with any consistency since its Nov 2016 through April 2017 run. But it nearly so did (at 99.425 on 07 March) even as Gold was completing its spike (at 2079 on 08 March). Gold and the Dollar soaring together? "Yikes!" But it does happen.

Despite Gold's spike and fade -- even should near-term negativity stay in the way -- at the end of the day we obviously look for Gold to win far and away! 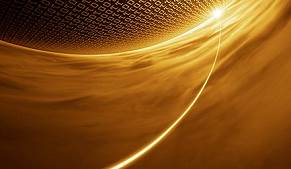