Gold up, volatility down

Gold having completed its usual geo-political spike and fade finds its trade now more regularly played. The expected daily trading range (EDTR) is swiftly dropping from a war-high of nearly 50 points now to sub-40, and shall further shrink into the new week. Here graphically is Gold's EDTR from one year ago-to-date, now 37 and still above average, however sinking like a stone:

And more broadly, with the war sadly having morphed into a daily absorbed event, volatility extremes at large are rapidly waning, the revered, oft-feared Chicago Board Options Exchange's Volatility Index "VIX" actually settling the week below its 200-day moving average for the first time since 09 February.

In fact, within the buzz at a large gathering this past week, we overheard it callously questioned: "Is there a war going on?" Irrespective, the markets have to a degree "moved on", the S&P 500 itself having netted seven gains in the last nine sessions. Regardless of war, stagflation, increased interest rates, and an S&P price/earnings ratio today 68% above its lifetime median, life apparently is good.

'Tis good as well for Gold -- it recording its 11th up week of the past 15 -- in settling yesterday (Friday) at 1958. Price again avoided by mere pips tripping its weekly parabolic Long trend to Short per the rising blue dots next shown here. Now 21 weeks in duration, the Long trend ties for sixth most extensive this century. Yet should 1910 trade in the new week, it all flips to Short; and should you be scoring at home, Gold's expected weekly trading range is now 66 points:

Meanwhile from the "Back in Harmony Dept." we again present the website's graphic of Gold vis-à-vis its smooth valuation line, (borne of price's changes relative to those of the other four primary components which comprise the BEGOS Markets: Bond / Euro / Gold / Oil / S&P 500). Here below, the lower panel oscillator (Price less Valuation) is the key: at its recent closing spike, (Gold 2058 on 03 March), price was nearly 200 points above the smooth line; today combined with the duly rising line and price fade, the two returned to harmony this past week at the oscillator level of 0 (zero). But obviously by the opening Scoreboard's debasement value of 4071, Gold remains wildly underpriced, just as 'tis by our forecast high for this year of 2254. For the present, here's the in-harmony graphic:

That mouthful said, given Gold in the technical vacuum is quite stretched to the upside, our near-term sense is price trading between, say, 2000 and the underlying support zone (as last week shown) spanning 1854-1779. However: with Gold "awareness" being renewed, our 2254 target remains well in view.

"Gold-optimistic as ever, eh mmb?"

Squire mon vieux, were we not, we wouldn't be writing.

As for the "They're Just Figuring This Out Now Dept." (aka the "Federal Reserve"), Chair Powell went on record this past week saying that interest rates need be quickly raised. And as you regular readers know, we've not ruled out a Volckeresque "Saturday Night Massacre" akin to 06 October 1979. (Yes, 'tis a bit of a stretch perhaps). But in peering ahead at next week's incoming stream of 15 metrics for the Economic Barometer, Thursday (31 March) brings the Fed's favoured inflation gauge: Core Personal Consumption Expenditures. For four consecutive months, the reading has been at a steady annualized pace of +6.0%. But 'tis "expected" this time 'round to have "cooled" a tad to +4.8%. Nonetheless comparatively: the "riskless" US 30-Year Bond yield is only 2.603%; the 10-Year Note only 2.492%; and the three-month Bill only 0.520%. Then there's the "riskfull" S&P 500 yield which settled the week at only 1.406%.

"But people don't buy stocks anymore for yield, mmb, 'cause they only go up and up and up, right?"

Further in support thereto, Dow Jones Newswires reported this past week that older Americans are "flush with housing and stock portfolio wealth". Living the marked-to-market illusion is a beautiful thing. Living the reality of the falling Econ Baro is another thing:

And notable (or perhaps better stated notorious) amongst last week's brief set of stagflating metrics was shrinkage in February for both Pending Home Sales (-4.1%) and Durable Orders (-2.2%). But thankfully, the straight-up S&P is oblivious to it all... "Whew!"

Not so oblivious to price's recent spike and fade are Gold's daily bars below on the left from three months ago-to-date. The baby blue dots of 21-day linear regression consistency are smack on their 0% axis, meaning that measure is now trendless, (which for you WestPalmBeachers down there means 'tis El Flato). Below on the right is Gold's 10-day Market Profile, its 1935-1924 area bellying-out as near-term trading support:

Silver continues her precious (rather than industrial) metal stance as her like two-panel presentation is spot on with that for Gold, the neutral "Baby Blues" at left and Profile at right, wherein we see 25.15 as near-term trading support:

So with just under a week to run until March is done here we've the present state of the Stack:

Gold's Value per Dollar Debasement, (from our opening "Scoreboard"): 4071

Finally to wrap, we've this:

The iconic Carl Icahn -- who by our reckoning has got to be some 120 years old by now -- remarked this past Tuesday to the FinMedia that there "...very well could be a recession or even worse..." Clearly Carl keeps an eye on the Econ Baro. And eye, too, Gold: range is tightening, but the future worth sighting! 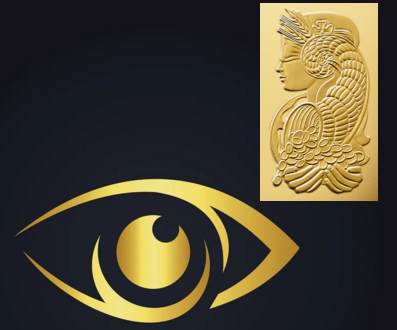