Inflationary rates have been rising dramatically over the last year. We have seen both the CPI and PCE inflation index increasing each month since October last year. The latest number to be released by the government was the CPI index for February which came in at a 40 year high of 7.9%. This is the highest level in 40 years since January 1982. On March 31, the government will release the PCE index (Personal Consumption Expenditures Price Index) for February.

Both the CPI and PCE index has risen for the last five consecutive months. The PCE index came in at 5.1% YOY in October 2021, 5.6%YOY in November 2021, 5.8%YOY in December 2021, and 6.1% in January of this year. This index reflects changes in the price of goods and services that are purchased by American consumers. Most noteworthy, this index omits changes in both food and energy costs. That being said, it is the preferred measure of inflation used by the Federal Reserve to determine proper action regarding the current Fed Funds rate.

Most economists expect the premise that the Federal Reserve has been behind the curve when it comes to letting inflationary pressures spiral to their current level by leaving the Fed Funds rate between zero and 25 basis points up until last month. However, the latest numbers for the consumer price index in February came in at 7.9%, resulting in a major change in regards to how quickly the Federal Reserve will normalize interest rates.

At the last FOMC meeting, they initiated and implemented the first interest rate hike since the pandemic. The subsequent recession resulted in the Federal Reserve taking interest rates near zero. Last month as expected the Fed raised rates by ¼%, taking the fed funds rate to between 25 and 50 basis points (1/4% to 1/2%). 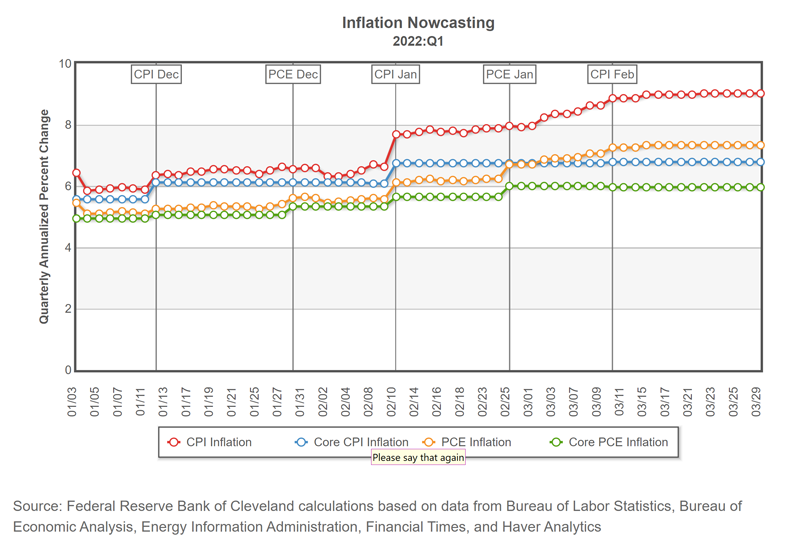 The current forecast for the PCE index in March by the Federal Reserve Bank of Cleveland indicates that inflation will continue to increase. Their forecasts are based upon data from the Bureau of Labor Statistics, Bureau of Economic Analysis, Energy Information Administration, Financial Times, and Haver Analytics.

The forecast issued by the Federal Reserve Bank of Cleveland for the CPI inflation index for March is 8.41% YOY. This forecast was updated today March 29. They also have forecasted the inflationary level for the first quarter of this year (2022: Q1) which they believe will come in at 9.01%.

If these forecasts are accurate, it will put additional pressure on the Federal Reserve when they convene for the next FOMC meeting in May. Currently, the CME's FedWatch tool is projecting that there is a 71.1% probability that the Fed will raise rates in May to ¾% to 1%.

President of the Philadelphia Federal Reserve Patrick Harker said that he favors a “methodical” series of quarter percentage point interest rate increases, but is open to larger half percent point hikes if inflation does not soon show signs of easing.

The most recent projections by the Federal Reserve Bank of Cleveland indicate that inflation will not show signs of easing which means that the likelihood of more aggressive interest rate hikes at the remaining six FOMC meetings is highly likely.

That will pressure gold to stabilize its price at approximately $1900 or even cause the precious yellow metal to decline further. Currently, April futures are down $22, or 1.13%, and fixed at $1917.80. The June 2022 contract which will soon become the most active traded month is currently fixed at $1923.40 after factoring in today's decline of $21.30. Gold's selloff today was tempered by dollar weakness with the dollar index currently down 0.59% and fixed at 98.47.

The effect of dollar weakness is quite evident when looking at spot gold. The KGX (Kitco Gold Index) is fixing spot gold at $1919.20. On closer inspection dollar weakness has added $14.20 and selling pressure has taken gold down by $17.60 resulting in a decline in spot pricing of $3.40.