Gold mining stocks as a whole have underperformed Gold since 2007. The GDX to Gold ratio from its 2007 peak to its 2015 bottom declined 80%.

The Gold price peak in 2008 was about where it bottomed at the end of 2015. That’s over seven years of a flat market coupled with steady increases in costs.

Too many people associate the Gold price level with where the miners should be trading. It's important to note that the performance of gold stocks relative to Gold depends on company margins, which can be squeezed on both sides outside of a bull market.

Take the last 18 months, for example. The Gold price declined, and mining costs increased. A double whammy is why miners fell more than the Gold price.

Since mining costs rarely plunge, the best time for margin expansion is when Gold makes its sharpest moves to the upside. This usually occurs following a major bottom (or crash) or major breakout.

We plot the MVIS to Gold ratio at certain points in the chart below. The MVIS is the parent index of GDXJ and has a history back to the start of 2004.

The MVIS to Gold ratio increased the most during the cyclical bull market that began from the crash low during the global financial crisis in November 2008.

The most significant breakout for Gold in recent decades was in September 2005. The MVIS to Gold ratio doubled from the May 2005 low to the November 2007 peak.

As we’ve written about for months, Gold is in position for one of the three most significant breakouts in its history. A break above $2,100 triggers a measured upside target of $3,000 and a log target of $4,000.

The technical setup aligns with our opinion.

The GDX to Gold and GDXJ to Gold ratios show explosive upside potential if they can break out from decade-long bases. 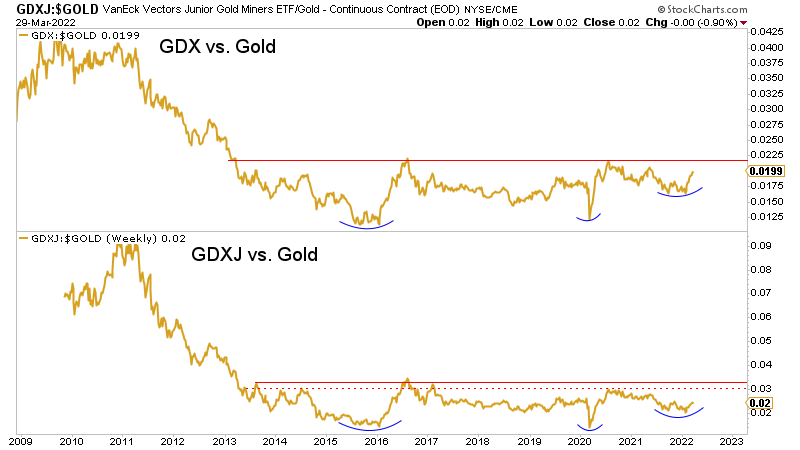 The miners could be sending early signals of their future outperformance, judging from recent market action.

During a correction, relative strength in the stocks is rare and usually very bullish.

The sector correction and consolidation should continue this spring, but the miners are sending early signals about what will come later in the year.