What effect has Ukraine, inflation, and the Fed had on gold prices?

Gold prices have been affected by three primary factors, inflation, the war in Ukraine, and lastly, statements and actions by the Federal Reserve. Overwhelmingly, market participants are focused on the effects of spiraling inflation levels and the war on Ukraine providing bullish market sentiment for the precious yellow metal. While statements and actions by the Federal Reserve have curtailed any sustained upside movement gold continues to gain value this year.

However, following the intraday high were statements by the president of the Chicago Federal Reserve Bank, Charles Evans said, that he would not oppose interest rates moving higher to more of a neutral stance between 2.25% and 2.5% by the end of the year. This could only be accomplished by the Federal Reserve raising interest rates by ½% at two of the remaining FOMC meetings this year.

Speaking to the Detroit economic club Charles Evans said, "Fifty is obviously worthy of consideration; perhaps it's highly likely even if you want to get to neutral by December." The net result of his statements today took gold from its intraday high roughly $18 above current pricing, to its current price just below $1960 per ounce.

The primary reason that gold continues to trade higher in light of a much more aggressive Federal Reserve is the current level of inflation as well as the war in Ukraine.

Tomorrow the government will release the Consumer Price Index (CPI) report, which will give the investment community the latest information on the current level of inflation in the United States. The current consensus by economic analysts is that the March report will show another uptick in inflation. Adding to the former pressure, which took inflation to its current 40-year high is the war in Ukraine which resulted in higher food and oil pricing. The CPI inflation index came in at 7.9% for February and it is anticipated that tomorrow's report will show that inflation has moved substantially past 8%. 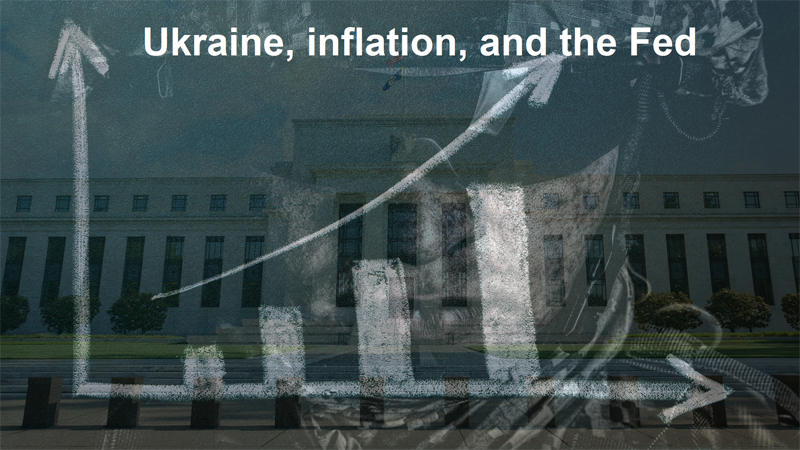 The current military action by Russia as it attacks its neighbor in south Ukraine is expected to accelerate with no end in sight. Ukraine today said that it expects Russia to initiate a major offensive imminently with military action shifting its focus from the capital city of Kyiv to the Eastern portion of Ukraine, where pro-Russian separatists currently occupy the territory of Donbas. Karl Nehammer, the Austrian Chancellor, met with Vladimir Putin, the first EU leader to hold face-to-face talks with the Russian president concluding his viewpoint, "I generally have no optimistic impression that I can report to you from this conversation with President Putin… The offensive (in eastern Ukraine) is evidently being prepared on a massive scale."

Combined, the continued acceleration of inflationary pressures in the United States and the war in Ukraine are overwhelmingly balancing any negative pressure by statements and actions of the Federal Reserve. Collectively these three forces, Ukraine, inflation, and the Federal Reserve, have been the primary sources affecting gold pricing. However, it seems that the war in Ukraine and upticks in inflation are moving gold prices higher than the negative or bearish market sentiment created by the Federal Reserve as it continues its action to normalize interest rates in an attempt to stave off the drastically higher level of inflation.