'Tis been quite some time since we commenced with a quiz, so here 'tis: 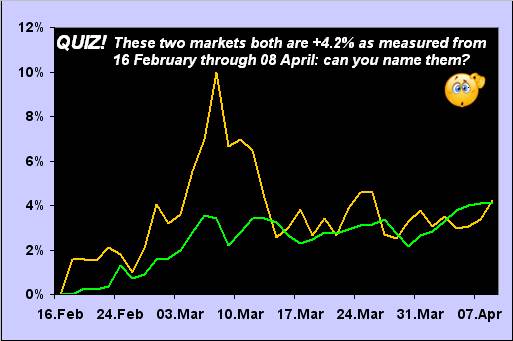 Obviously the gold line is Gold, the anticipated geo-political spike 'n fade starkly giving it away. But you WestPalmBeachers down there may be stuck as to the other line, the colour of which is green (hint hint, wink wink, nudge nudge...)

And, ahhhhh, we have a winner! That's right, Bunky (from Boynton): 'tis the world's "reserve currency", the Almighty Buck, as measured by the "Dixie" Dollar Index. Across these past 36 trading days, both Gold and the Dollar are up a net +4.2%, which for the conventional wisdom crowd is an impossibility. 'Course, you regular readers of The Gold Update fully comprehend that Gold plays no currency favourites. Et encore, voilà! As for Dixie itself, it traded above 100 on Friday for the first time (ex-2020's brief COVID spike) in five years.

Dollar attractiveness, indeed. Why maintain one's dough in an account of the Euro paying zero when StateSide money -- be it by the flat-curved Five-year Note, 10-year Note, or 30-year Bond -- presently yields 2.7%. Moreover, all three of those "risk-free" debt instruments now yield essentially double that of the "risk-full" S&P 500's 1.4%. Remember that U.S. Treasury campaign from back in '66? "Buy Bonds Where You Work!" And for the overseas yield chaser, "Buy the Bucks to Get 'Em!" Just in time for recession. Dollar strength, baby.

Specific to this week's title, "Gold Takes a Snooze as Volume Cools", that untowardly seems 180° out-of-phase given these five fundamental realities:

■ Inflation: been to the grocery store this past week?

Gold positives, one and all. Therefore, price ought be rockin' to the upside, right? But "ought" ain't "is". Rather, these past five days saw sleepy old Gold record -- be it by points or percentage -- its second-narrowest trading week of the year, a range of just 36 points within an "expected" trading range pegged for last week of 68 points; further the week's total contract trading volume was fourth-least year-to-date. "...zzzzzzzzz..."

Thus by that technical reality, 'tis fair to say there must be nuthin' goin' on out there.

Such nuthin' is reflected below in Gold's rightmost comparatively wee weekly bar as we view the lot from one year ago-to-date. 'Twas Gold's fourth consecutive week of recording a "lower high"; thus perhaps a bit of a bounce is nigh, albeit beneath the lid of the fresh parabolic Short trend per the two red dots:

Speaking of bounce, so did the Economic Barometer in a week of just six incoming metrics. To be sure, there were the ugly bits, February's Factory Orders shrinking for just the third time since the COVID sweeping shutdown two years ago, and Wholesale Inventories bloating by the second-largest amount in the 24-year history of the Econ Baro. But on the flip side, Initial Jobless Claims plummeted to a modern-day low, evidenced by the fact that everybody must be working as February's Consumer Credit sky-rocketed to levels we've never before recorded: "Lock in a rate before it's too late!" Too, the Institute for Supply Management's Services Index rose in March for the first month since its November reading. Thus, on balance, the Baro got that bit of a bounce as we below see. "Hello Lael...":

As for a potential hike of 50 basis points in the Federal Reserve's Funds Rate, the FedFundsFutures already have "priced-in" such increment for the 04 May Federal Open Market Committee Policy Statement, i.e. the current 0.25%-0.50% target range becoming increased to a 0.75%-1.00% target range; (the futures thereto settled yesterday at an equivalent rate of 1.045%). And as you no doubt heard this past Tuesday from Fed Governor and Vice-Chair Nominee Lael "The Brain" Brainard, the punch bowl is also to be emptied by some 90 billion ladles per month. "What? No refills?" (Now settle down there, Bunky...)

Settling down from their descent -- and then ascending since Tuesday -- are Gold's "Baby Blues", the dots of regression trend consistency that we next see on the left across price's daily bars from three months ago-to-date. The rightmost grouping does herald a nice basing pattern, although we caution that the aforeshown weekly parabolic trend obviously is Short, with price not immune to the oft-noted 1854-1779 underlying support zone. Then on the right is emphasized 1934 as clearly the most dominantly-traded price in Gold's 10-day Market Profile:

Silver's graphic remains similar, her Baby Blues (below left) just now beginning an upward curl, with the mid-24s in her Profile (below right) as near-term trading support:

Finally we've this from the "Ever Get a Job from a Poor Guy? Dept." Purportedly per data from the ever-feisty Forbes, globally combined billionaire wealth has slipped to the $12.7 trillion level. Such amount -- and again that's a global total -- would run the U.S. government alone for not quite two years. Then, who'd be next on the list? You perhaps? That in mind, we may still be near-term technically (not fundamentally) cautious on Gold; but for price to get off its bum and start flying toward our forecast high this year of 2254 would be most welcome! 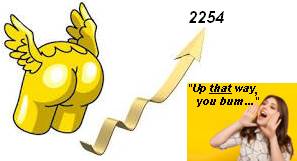