Inflation spirals to 8.5%, no surprise according to the Federal Reserve Bank of Cleveland

Today the BLS (Bureau of Labor Statistics) released its CPI inflation report for March 2022. The report showed that inflation had risen to 8.5% when compared to the inflation level in March 2021. When compared to month-over-month levels, inflation rose 0.6% as February's level of inflation came in at 7.9%. However, this news was no surprise as it had been released by the Federal Reserve Bank of Cleveland on March 30.

As we said in our letter published on March 30, the Federal Reserve Bank of Cleveland released its estimates and forecasts for both the PCE and CPI index. Their forecast indicates an increase in the PCE of 0.62% year-over-year. They also have made a prediction on the CPI index for March, which will be released next month. Their forecast is based upon data from the Bureau of Labor Statistics, Bureau of Economic Analysis, Energy Information Administration, Financial Times, and Haver Analytics. Based on their analysis, they forecasted that the CPI index for March would come in at 8.41% year-over-year and that the March PCE would increase by 0.75% month over month.

Since the Federal Reserve has access to the same government bureaus that produce the report, they are privy to this information long before it is released to the public. It is for that reason that the Federal Reserve Bank of Cleveland was able to correctly forecast the CPI report for March before the month had concluded. Their forecast was off by only 0.09% from the actual number released today. They also forecasted that the level of inflation for the first quarter of 2022 would come in at 9.01% when compared to the first quarter of 2021.

Forecasts by the Federal Reserve braced the investment community for this extreme acceleration in inflationary pressures, and today's report verified that inflationary pressures continued to grow in March. This sent ripples through financial assets resulting in rising yields in U.S. treasuries and a strong uptick in safe havens such as gold and the dollar. 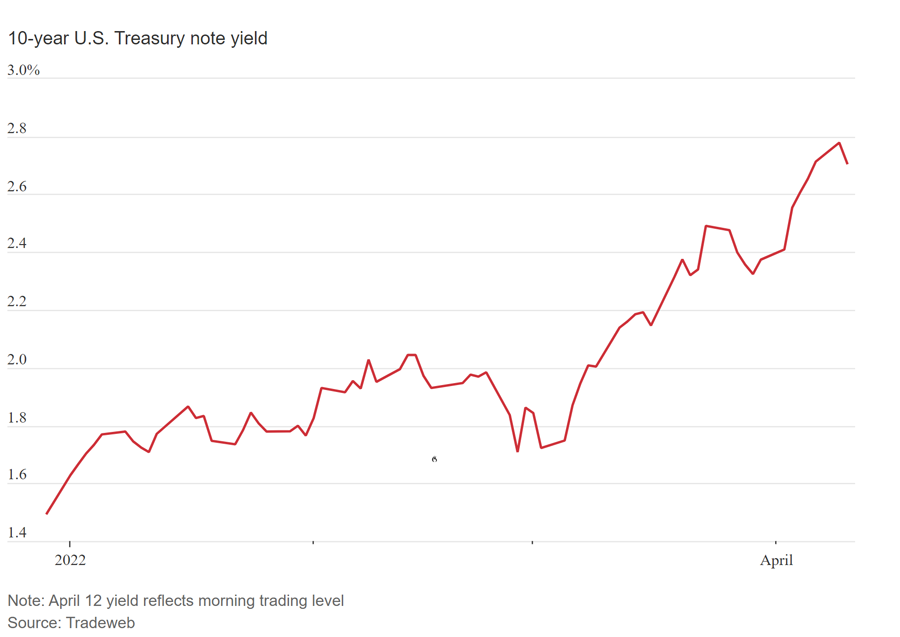 The U.S. dollar also strengthened with the dollar index breaking above 100 after factoring in today's gain of 0.39% which took the index to 100.315.

While there was certainly a warning by the forecast released by the Federal Reserve Bank of Cleveland at the end of March, it was not until verification by the BLS in today's report that market participants fully factored this uptick in inflationary pressures into market pricing. Although the Federal Reserve is planning an aggressive and hawkish monetary policy to curtail the spiraling level of inflationary pressures, it will be difficult at best to have any real impact. This is because inflationary pressures continue to be in goods and services in which demand cannot diminish as they are essential to day-to-day life. The primary goods and services hit with increased inflation in March were food, energy, automotive purchases, and rental prices.