Dark clouds over the gold market form a bearish shape

Gold’s efforts misfired, silver probably faked another breakout, and gold miners aren’t doing very well either. Is there a repeat of events from a decade coming?

Yesterday’s session served as a great bearish sign, not just because of gold’s and silver’s reversals, but also because of miners’ underperformance.

Let's take a look at gold.

During yesterday’s session, gold moved slightly above its previous local high, but then quickly invalidated this small breakout. Invalidations of breakouts in gold are a sell signal on their own, but the fact that we saw the same thing in silver makes the bearish nature of this development even more prominent. 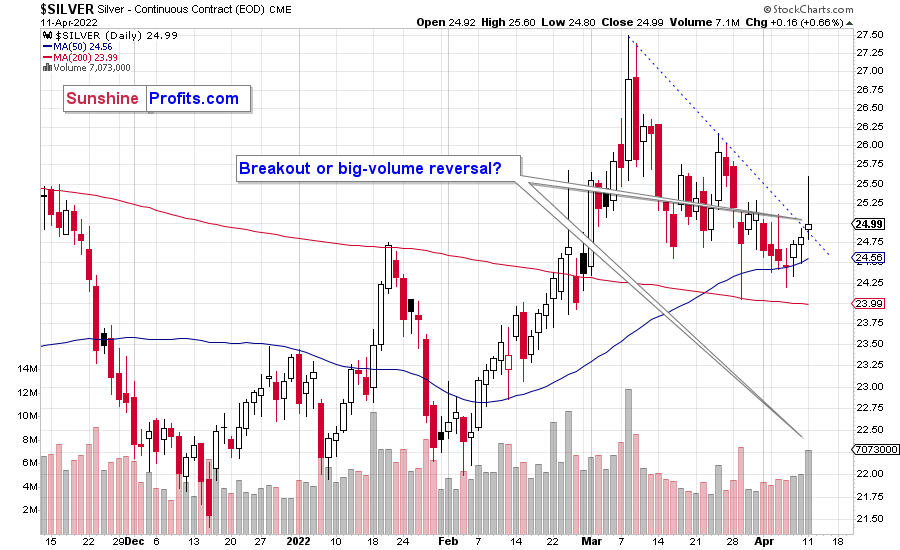 After having been relatively calm in April, silver soared above its declining resistance line… only to disappoint shortly thereafter. The white metal still closed the day slightly above the resistance line. However, given that the reversal took place on relatively high volume, the odds are that this breakout will be invalidated shortly.

In fact, it was only yesterday when I wrote that silver was known for its fake breakouts right before starting much bigger declines. It appears that we have witnessed this kind of performance once again.

While both precious metals ended the session higher, mining stocks ended it lower. This could be a sign that the top is in. Let’s take a look at junior miners’ short-term chart. 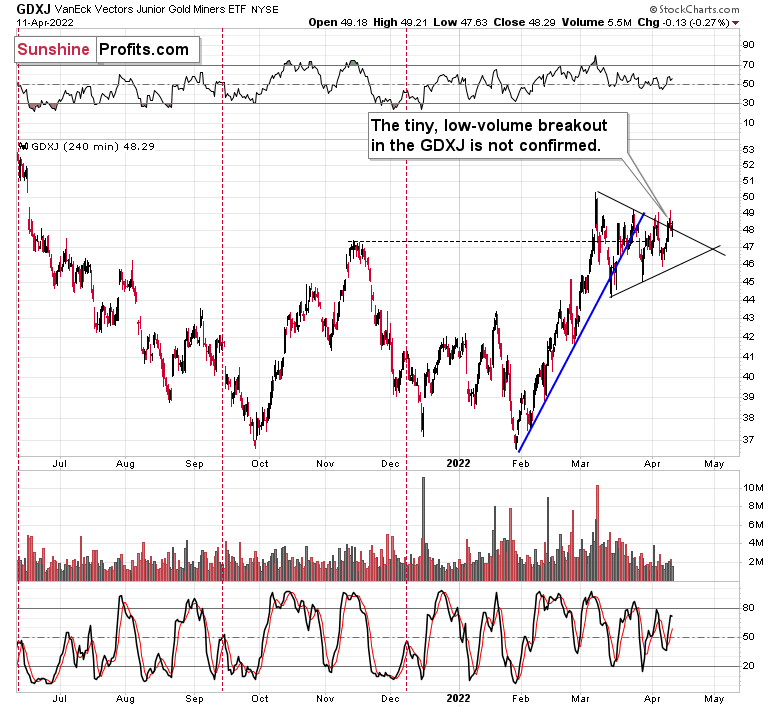 While the GDXJ ETF didn’t invalidate its tiny breakout above the triangle pattern in terms of the daily closing prices, it did move back below it on an intraday basis.

So, if gold’s and silver’s reversals are followed by lower prices, junior miners will likely invalidate the breakout and trigger more selling.

Let’s keep in mind that while gold and silver are repeating their 2012 performance, we can spot some analogies in GDXJ too.

At first, in late-September 2012 and early-October 2012, junior miners consolidated, and then they declined, thus entering the back-and-forth decline mode. It happened on relatively low volume.

Right now, GDXJ is also after a consolidation that’s been taking place on relatively low volume and that followed a rather sizable short-term upswing.

Well, at the late-2012 top, the GDXJ closed at $87.83. Months later, it closed at $29.59, or roughly one third of its initial price. In other words, junior miners erased about two-thirds of their initial price. Yes, it was a great time for inversely trading instruments. The JDST wasn’t trading at that time yet, but DUST (which trades opposite to GDX) moved up by over 600%.

Even though the short-term outlook is somewhat unclear, the medium-term outlook for the precious metals sector remains very bearish, and the upside potential for the short positions in junior mining stocks remains enormous, in my opinion. In my view, patience is likely to be very well rewarded.