Gold breaks the key level of $2,000 in its first unsuccessful attempt

The combination of exceedingly high inflation and the geopolitical crisis in Ukraine were strong enough forces to run gold prices back above $2000.

The focus of my articles throughout last week dealt with how the Federal Reserve and global central banks were faced with a near impossible task to reduce rising inflation. Dramatic measures would need to be taken including raising rates to at least half of the current level of inflation. That means raising rates to 4% - 6%.

However, this alone would not lead to the endgame of inflationary normalization. To achieve that goal governments have to focus upon the primary forces that led to a 40 year high. Inflation levels began to climb long before Russia attacked Ukraine. They began as central banks globally allocated enormous amount of capital to rebuild devastated economies that occurred during the recession, and to accomplish a task without their actions leading to a recession. Secondly, the primary force taking prices higher besides global devalued currencies were and are the supply chain issues that up till now have yet to be solved.

The military invasion by Russia into Ukraine added jet fuel to the fire, magnifying supply concerns in particular the cost of energy and food. Russia is the third-largest exporter of oil to countries worldwide. And the production of grain specifically corn and wheat, have a large component exported from both Ukraine and Russia.

Ukraine for example is the fifth largest producer and exporter of corn in the world, and Russia is the third-largest wheat exporter globally. Collectively they represent a respectable percentage of these grains which are exported around the world. Unquestionably, these exports have ceased or greatly diminished since the onset of the war.

The recent rise in inflation has been fueled by food and energy costs. Gasoline prices alone increased by 18% last month. Even though the United States is the number one producer of oil, was greatly affected by the Russian oil boycott by the U.S. and the European Union.

These inflationary forces I believe will remain so persistent that it is inconceivable that the supply chain issues will be resolved this year and highly unlikely that they will unwind in 2023. This concern along with global currencies continuing to be devalued is a recipe for double-digit inflation. 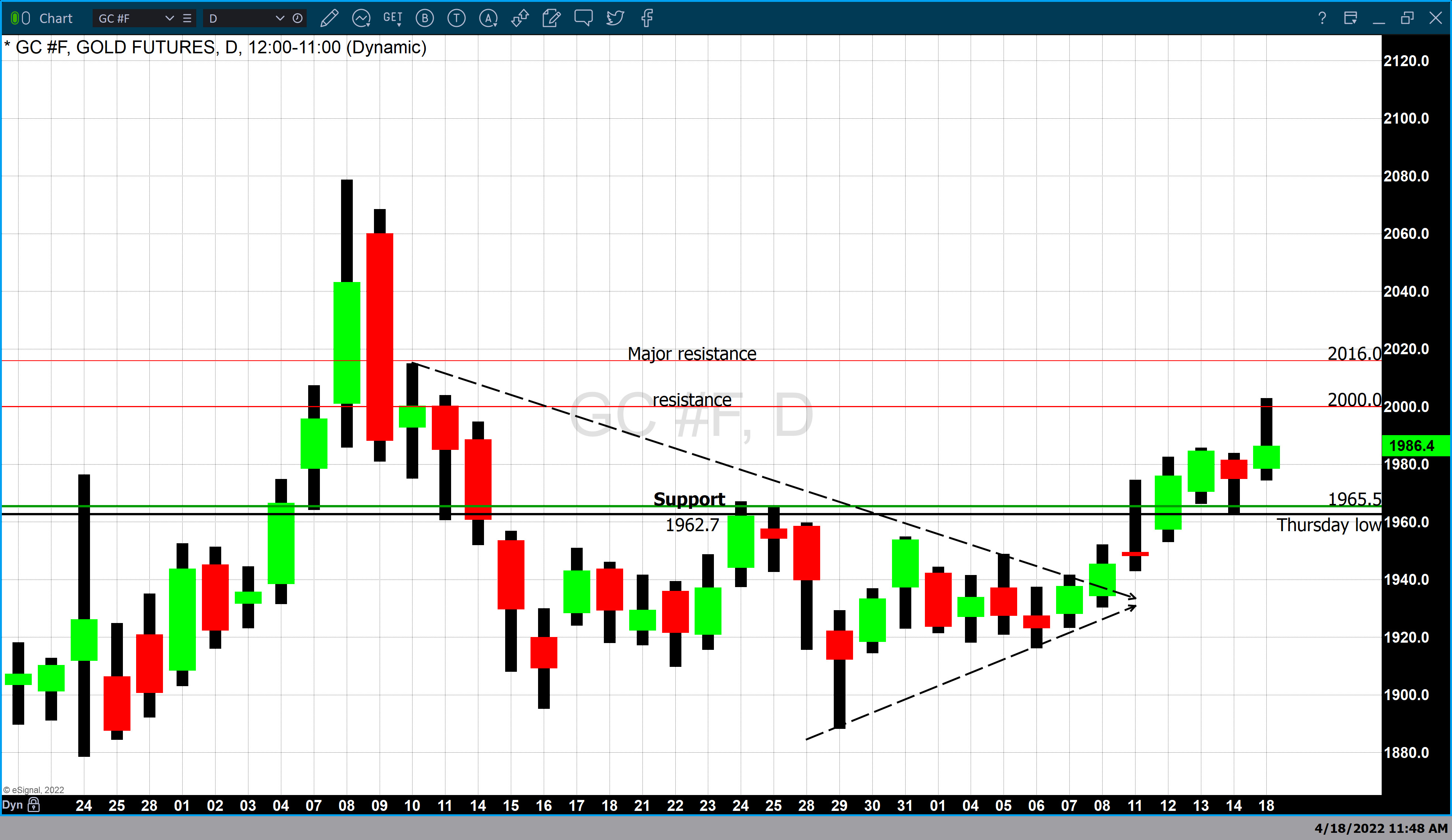 Investors have turned to gold and U.S. debt instruments as the safest asset class to protect against the uncertainty that currently exists. As of 5:19 PM EDT gold futures basis, the most active June 2022 contract is currently fixed at $1982. However, it is today’s intraday high that had garnered the most attention when gold traded to a high of $2003 per ounce. At the same time, it was unsuccessful in holding that price, giving back approximately $21 of that gain. The net result was that gold gained $7.10 on the day and still looks exceedingly strong. In my opinion, it is not if but when gold will breach $2000 per ounce on a closing basis and then move to higher pricing. 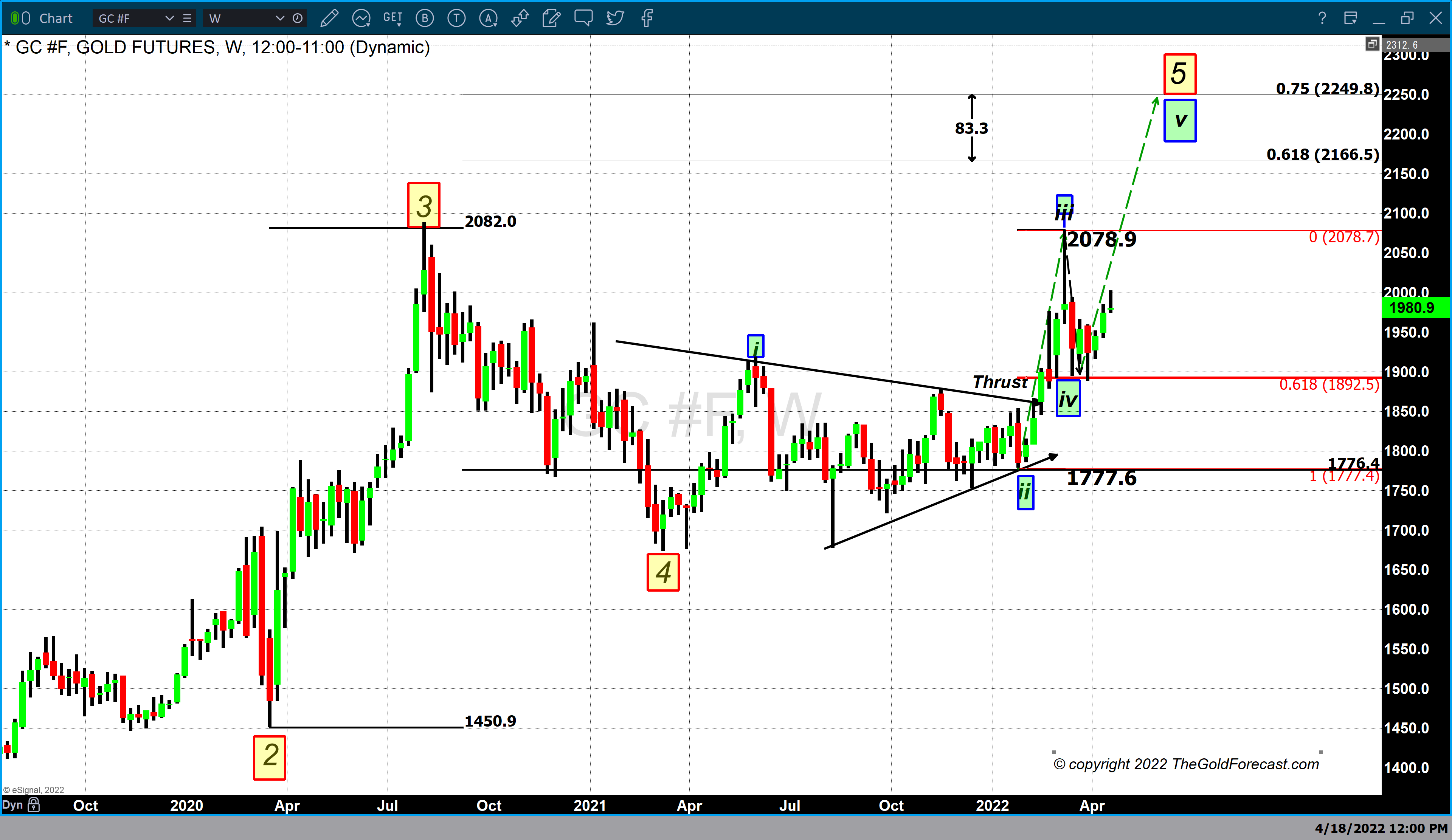 As our subscribers and loyal readers at Kitco News know my forecasts of gold reaching between $2166 - $2300 per ounce have been published over the last four months. While four months ago these predictions might have been perceived as foolish and overly optimistic. But today’s break above $2000 certainly makes that upper-level forecast more achievable and realistic.