Gold continues to decline as the Fed prepares to fight inflation

The Federal Reserve’s next FOMC meeting is just under two weeks away, and market participants are gaining insight from Chairman Powell and other Federal Reserve voting members. Recent statements by Chairman Powell have indicated a major shift in his position regarding inflation. Up until his most recent statements, he maintained that inflation levels had peaked, were transitory, and would begin to decline. However, he has been forced to reevaluate those assumptions based on the reality that the CPI is currently at 8.5% for March, and the PCE index came in at 6.4% in February. PCE numbers for March will be released on April 29.

Statements by all members of the Federal Reserve have intrinsically contained subtle changes in words used to describe their forward guidance, this was not the case this week when Chairman Powell addressed the issue of inflation head-on.

For the first time, Powell was forced to acknowledge that, “it is appropriate to be moving a little more quickly … Our goal is to use our tools to get demand and supply back in synch…and do so without a slowdown that amounts to a recession …It is going to be very challenging.”

During the March FOMC meeting, the Federal Reserve began its process of interest rate normalization or “lift-off” by raising the Fed Funds rate from virtually zero (0% to ¼%) by ¼% taking interest rates to 25 – 50 basis points.

The most recent inflationary data indicates that Americans are experiencing the highest inflationary pressure since January 1982, which makes it almost certain that the Federal Reserve adopt a much more hawkish monetary policy in the remaining FOMC meetings this year.

St. Louis Federal Reserve President James Bullard did not mince words about changes to their forward guidance. In a virtual speech on Monday Bullard alluded to raising rates by 75 basis points (3/4%) saying that when it comes to a potential 75 basis point increase “I wouldn’t rule it out”. Bullard also said that multiple rate hikes of ½ a percent are almost a certainty as the Federal Reserve begins the task of taming inflation.

Certainly, the Federal Reserve is faced with the dilemma of moving inflation to its 2% target without creating an economic contraction that would lead to a recession. Although both Chairman Powell and James Bullard maintain that a “soft landing” is possible the probability of the Fed pulling off such a feat is extremely low.

These dynamic changes in the future outlook of the Fed’s monetary policy sent ripples through many sectors of the financial markets. Dollar strength and higher yields in U.S. Treasuries both benefited from the almost certain likelihood of a series of strong rate hikes. U.S. equities and the safe-haven assets such as gold both experienced solid price declines as a direct result of upcoming rate hikes. As of 5:42 PM, EDT gold futures are currently fixed at $1932.50 based on the most active June contract after factoring in today’s decline of $15.70 or 0.81%.

Gold has declined aggressively since April 18 when gold hit a high of $2003. Gold declined 3.54% this week. However, our current studies indicate the strong potential for technical support at $1927. The gold chart above indicates that support is based upon two Fibonacci retracement sets. 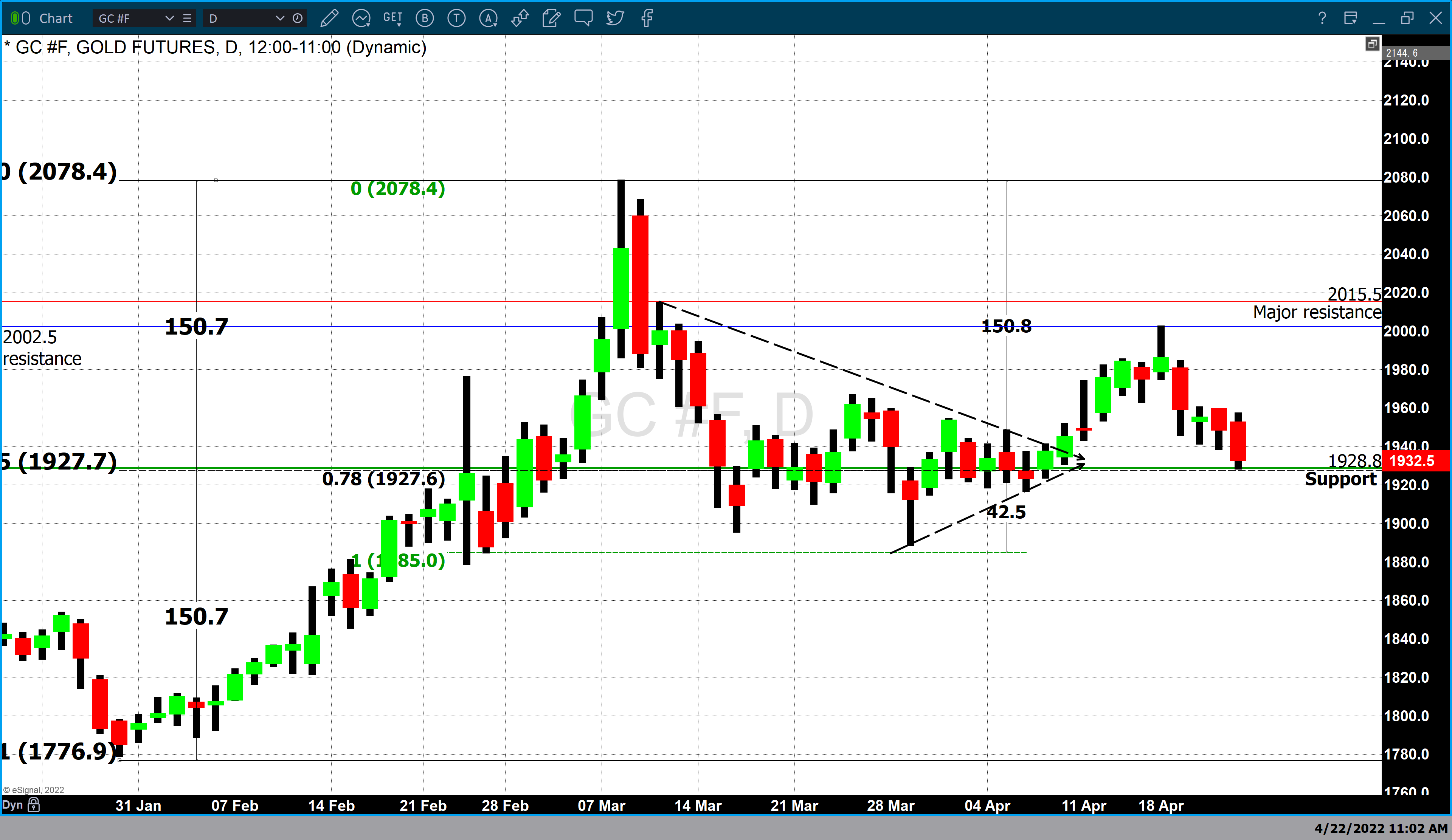 Tuesday's Charts for Gold, Silver and Platinum and Palladium, August 9

Silver breaking out to the upside, will gold follow?

Where are the stops? Tuesday, August 9, gold and silver