On the heels of tomorrow's FOMC meeting gold prices plunge

The U.S. 10-year Treasury note hit a milestone yielding 3%, the first occurrence of yields at this level since 2018. The 10-year note slipped below today's high and by settlement was yielding 2.995%. The short-term two-year government bond gained 1.2 basis points with its current yield at 2.73%. 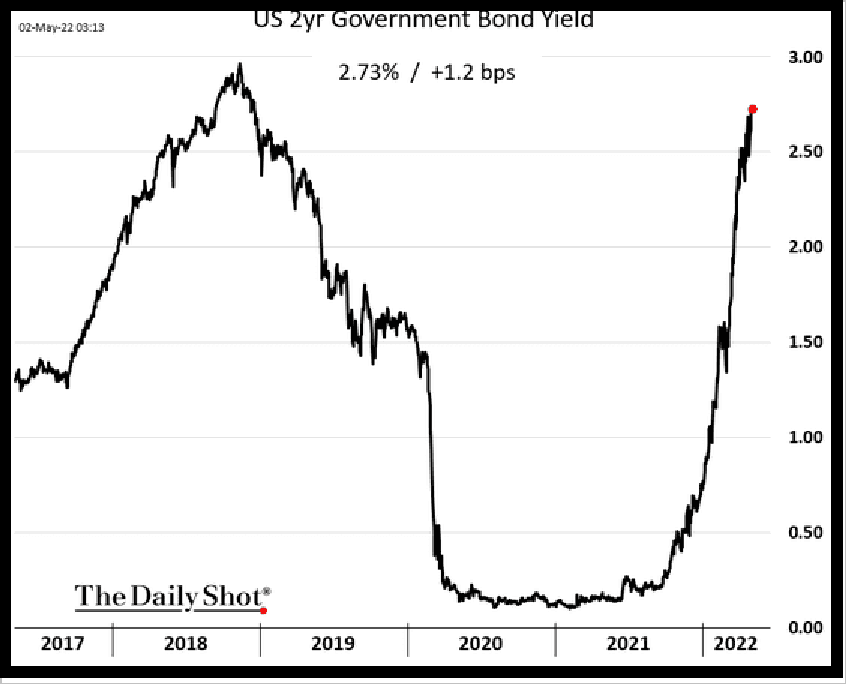 According to the Wall Street Journal, "the labor market is extremely tight and inflation is running at its fastest pace in decades, prompting the Fed to signal a rapid series of interest-rate increases and sparking a steep climb in yields that has sent shock waves through markets."

The CME's FedWatch tool indicates that there is a 98.7% probability that the Federal Reserve will raise the Fed funds rate by ½ a percent. This is the overnight interest rate that depository institutions trade surplus capital to other banks. This would take the fed funds rate from 0.25%-0.5% to 0.75%-1%. This interest rate probability indicator is also predicting another strong rate hike during the June FOMC meeting. It predicts that there is an 86% probability that the Fed funds rate will move to between 1 ½% - 1 ¾% in June.

The combination of dollar strength, as well as sharply higher yields on U.S. notes and bonds collectively, put major pressure on gold resulting in today's decline of just over 2 ½%. All three assets (U.S. dollar, U.S. Treasuries, and gold) are considered safe-haven assets. However, because gold is a non-yielding asset higher yields in U.S. notes and bonds raise the opportunity cost of holding gold and therefore make it less favorable.

Recent dollar strength is a direct result of higher yields in U.S. debt instruments. Our technical studies show that the dollar has traded to this level on two prior occasions over the last seven years. At the end of 2016 as well as in April 2020, the dollar traded to highs at approximately 103.75. On each of these two occasions that price point was not sustainable resulting in a major decline in both instances. At the end of 2016, the dollar would have a major decline resulting in the dollar index falling to a low just above 88 points. In April 2020 the dollar index would decline to 89 points by January 2021.

For those who would like more information simply usethis link.