50-point hike priced, but hawkish threats for June are not 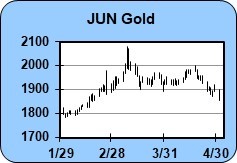 Today will be a test of the gold and silver bulls’ resolve with the US Fed likely to hike rates by 50 basis points, but a portion of the trade this morning is still fretting over the prospect of a larger hike. However, the bigger threat is the potential for overly hawkish US Fed dialogue that could promise aggressive front-loaded hikes to head off inflation. Therefore, the bull camp will need to see a simple 50-basis point rate hike and Fed suggestions that they will be data dependent or make their decisions on a meeting-by-meeting basis. On the other hand, we give a greater than 60-40 chance the Fed will strongly point to another aggressive rate hike at the next FOMC meeting. Another possible signal from the Fed event today is the number of Fed members for or against the 50-basis point anticipated hike. The gold and silver trade benefited from several counter-trend reactions in outside markets yesterday, with US Treasury yields and the US Dollar Index ticking lower. Gold has established a positive correlation with US equity markets, as equity action is currently a proxy for views on physical and investment demand for metals and other physical commodities. For gold and silver to rally, it requires relief that the Fed is not locked and loaded for a series of large rate hikes or quantitative tightening. Gold ETF holdings declined for the seventh straight session, but they are still 8.8% higher on the year. Key support in June Gold remains at $1,850 and then again down at the 200-day moving average of $1,839.50.

With the PGM markets yesterday holding up in the face of choppy to lower action in the gold and silver trade, it is possible that they are beginning to factor in significant tightening supply and the massive price difference between palladium and platinum. As for palladium, a Reuters poll expects Russian supply to dry up and for that to underpin prices. The poll pegged palladium prices to average $2,375 an ounce this year and $2,250 next year. So far, sanctions have not specifically targeted the main Russian palladium producer Norilsk Nickel, even though foreign financing and transfer operations at banks are likely to be restricted by sanctions on Russian banks and refiners. The most recent COT positioning report showed palladium maintaining a spec and fund net short, and it is likely that the Monday low expended that net short even further. Critical support is at in June Palladium $2,200 and then again at $2,155. While the platinum market came alive over the past four trading sessions and made a higher high this morning, we are suspicious of the market's ability to extend straightaway without leadership from palladium and the equity markets. However, we suspect the incentive to switch autocatalyst components from palladium to platinum has been given a significant push since the Russian invasion. It talks a long time to switch manufacturing processes, but speculation on a pickup in rotation and bottom picking in platinum could give the bull camp an edge in the near term. Unfortunately for the bull camp, platinum ETF holdings yesterday declined by 1796 ounces and are now 0.8% lower on the year. In the early action today a fresh higher high in the July Platinum contract gives the bull camp an edge and solidifies the $900 level as an important value zone.

MARKET IDEAS: We are concerned that today's FOMC meeting will not only present a 50-basis point rate hike, but the Fed will also spout a flurry of hawkish guidance and perhaps announce quantitative tightening. The best hope for the bull camp today could be for a classic shift from "sell the rumor" to "buy the fact" off a straight rate hike, if there is not a series of hawkish promises from the central bank. Pushed into the market, we favor the bear case early but acknowledge the potential for a temporary "relief rally".

The question today is how hawkish the Fed is. 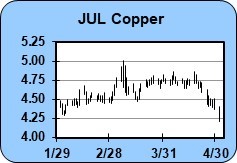 The copper market continues its attempt to consolidate the bounce from the Monday spike low, with the bull camp hopeful in the wake of news that lockdown rules in Shanghai are loosening and that overall infection numbers indicate the aggressive containment efforts are working. However, the market should see lingering pressure because of the latest International Copper Study Group's unchanged forecast of a 439,000-tonne deficit for 2021 and prediction of a 142,000-ton surplus in 2022. Demand concerns remain front and center, and it could be difficult to remove them quickly. In a minimally supportive development, LME copper warehouse stocks declined by 1750 tonnes overnight. However, the Peru protest by indigenous groups at a Chinese owned copper mine continues, with workers at the mine soliciting the government to remove the protesters. From a technical perspective, the sharp range down over the last three weeks has entrenched July Copper below the 200-day moving average after significant trading volume on the biggest washout of the last month. This leaves the technical structure of the market vulnerable as demand suspicions swirl in the marketplace. With a physical commodity market selloff and risk off environment surfacing over the last two weeks, we leave the path of least resistance pointing down. Fortunately for the bull camp, Chile forecast average copper prices this year at $4.45, which was up from a previous forecast of $4.10.

MARKET IDEAS: While July Copper has started building a consolidation zone above $4.26, demand fears remain a fixture. They are tempered by generally positive but guarded Covid news from China. According to one headline, total infections are coming under control, and some Shanghai restrictions are being removed. However, there were new activity restrictions announced for Beijing overnight. While we see prices hemmed in between $4.37 and $4.20. Beyond a temporary relief bounce following the Fed announcements, the bull camp lacks ammunition.