Here is what starts gold's next uptrend

Last week we wrote about the next fundamental catalyst for Gold, which could be three or four months away.

Today we write about what will lead to that catalyst.

Markets are a discounting mechanism. They anticipate and reflect the near future.

Consider the things that will lead to that policy reversal.

It could be bad economic data, inflation cooling, or problems from the strong dollar.

The first signals will come from the bond market, whatever the developments are. The Fed follows the market.

In the chart below, we plot three bond market indicators and Gold and Gold against the S&P 500. The vertical lines mark the peaks in the 10-year yield.

We should watch for a peak in the 10-year yield (which could lead the peak in the 2-year yield) followed by a reinversion of the yield curve. At that point, Gold should rebound. 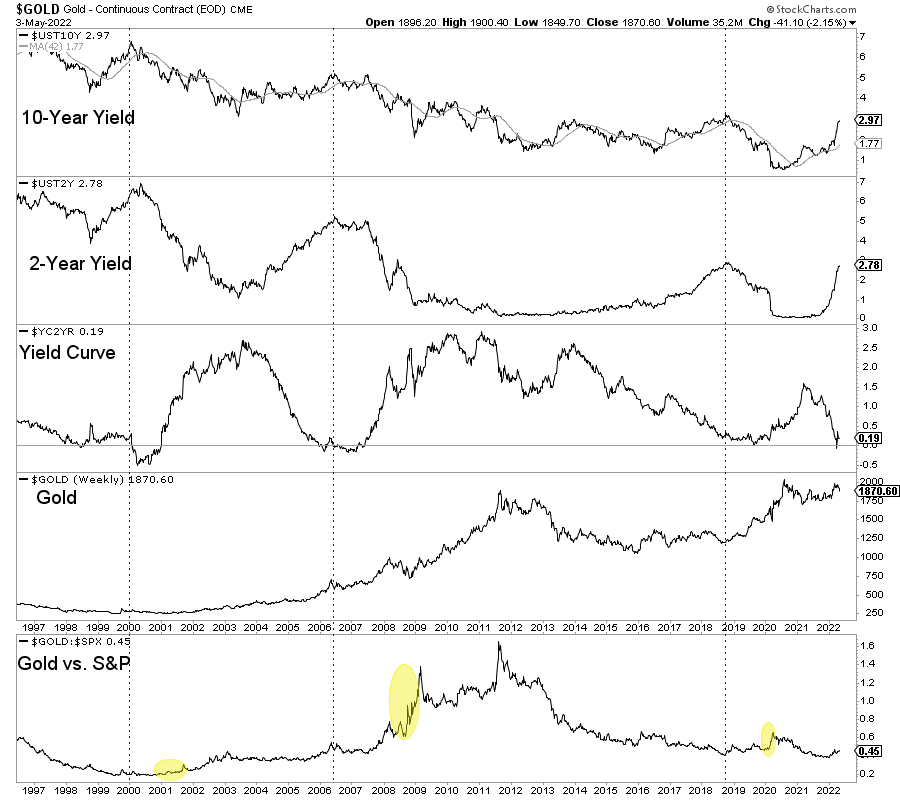 One positive is that the Gold to S&P 500 ratio has hit bottom and is trending higher above a rising 200-day moving average. As a result, Gold is in a better spot now than it was relative to the last three times the 10-year yield peaked.

While we could get a rebound in the stock market first, any sustained weakness could lead to a move similar to those in yellow.

As an aside, like the stock market, gold stocks are quite oversold and could rebound.

The window to buy quality juniors at cheap valuations reopened, but it will not be open for too long.

I continue to be laser-focused on finding quality juniors with at least 5 to 7 bagger potential over the next few years. To learn the stocks we own and intend to buy, with at least 5x upside potential after this correction, consider learning more about our premium service.
By Jordan Roy-Byrne