The selling pressure continued as U.S. equities continued in their dramatic decline. On March 28, the S&P 500 hit an intra-week high of 4635. What followed was five consecutive weeks of dramatically lower values. If today’s selling pressure indicates the week ahead, we could certainly witness U.S. equities declining over the last six consecutive weeks. In this short period, the S&P 500 has lost almost 14% in value (-13.89%). Today alone, the S&P 500 lost 3.20%. However, it was the NASDAQ composite that had the greatest percentage decline breaking below 12,000. After factoring in today’s decline of 521.41 points, the tech-heavy index closed at 11,623.25. 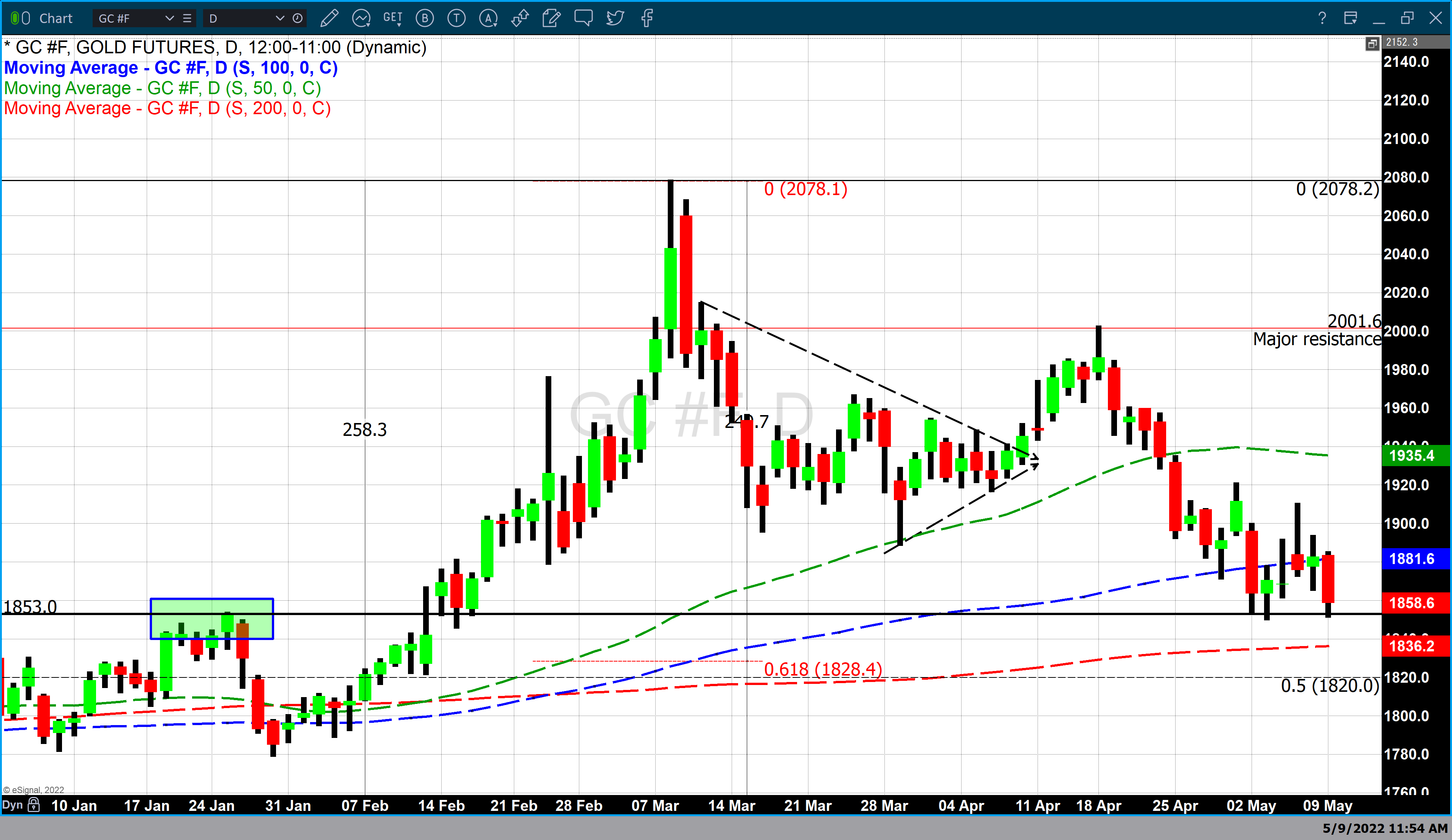 The dramatic sell-off in financial markets and the precious metals are in response to both the recent action of the Federal Reserve as well as the Fed outlook for the next two FOMC meetings. The Federal Reserve raised the Fed funds rate by half a percent at this month’s FOMC meeting and indicated that it would likely continue the trend of ½% rate hikes at both the June and July FOMC meeting.

This led to the recent sharp uptick in yields in U.S. Treasuries, with the 10-year Treasury note yield trading to a high of 3.2% today before settling at 3.039%. Higher yields in U.S. debt have been highly supportive of the U.S. dollar taking its value higher when compared to other currencies, and that has pressured both gold and silver prices lower.

The sharp decline in U.S. equities and precious metals over the last month can be directly tied to the spiraling level of inflation. This week on May 11, the U.S. Bureau of Labor Statistics will release the CPI for April. Currently, the Consumer Price Index is at 8.5%, the highest value seen since January 1982. The spiraling level of inflation is at the root of the recent rate hikes by the Federal Reserve as they attempt to slow down economic expansion to bring inflationary pressures down.

Forecasts for the April CPI differ with some analysts projecting a leveling off for a peak in inflationary pressures and others projecting that inflation will continue to run hot. According to Forbes, “April’s CPI estimate will be announced Wednesday before the stock markets open. Expectations are for the all-items rate to drop from 8.5% to 8.1%. To hit 8.1%, the month-to-month inflation rate will have to fall from 2.3% in January, 2.6% in February, and 3.8% in March to no more than 1.25% to hit the expected number.”

However, inflation forecasts released in Bloomberg Markets today say that according to a New York Fed survey, “Longer-Term Inflation Expectations Rise.” In an article penned by Alexandre Tanzi, he reported that “U.S. consumers project inflation in three years to be higher compared with a month ago, a potentially worrying sign for the Federal Reserve as the central bank tries to keep longer-term expectations anchored.”

Whether inflation levels continue to rise to higher levels as they have throughout this year or begin to peak, the probability that exceedingly high levels of inflation will continue to be persistent and not transitory as the Federal Reserve had maintained until recently with Chairman Powell and other Fed members saying that longer-term inflation expectations remain well-anchored.

While the Federal Reserve’s action of sharp rate hikes will most certainly lead to an economic contraction, the Fed cannot control the supply chain issues or the war in Ukraine which have been primary forces that have caused inflation to spike higher.

Gold will play a big role in the coming global 'monetary reset' as U.S dollar loses its dominance - Maxime Bernier