Today the Bureau of Labor Statistics (BLS) released the latest inflationary data vis-à-vis the Consumer Price Index for April 2022. As expected by many analysts the data revealed that inflationary pressures continue to run exceedingly hot. According to the report, the CPI “increased 0.3% in April on a seasonally adjusted basis after rising 1.2% in March,”. This takes the CPI year-over-year from 8.5% down to 8.3%.

Forecasts of the April CPI by analysts and economists predicted that the April report would indicate a downtick from 8.5% to 8.1%. The fact that the actual numbers showed that inflation remains persistent, and above predictions created strong ripples throughout multiple asset classes.

U.S. equities continued to tumble with the NASDAQ composite falling over 3% today, the Standard & Poor’s 500 declining 1.65%, and the Dow Jones industrial average declining by 1.02%. Today’s decline in all major U.S. indices was a continuation of a strong correction for the last six consecutive weeks. During the week beginning on March 28, the Standard & Poor’s 500 traded to a high above 4600 and closed today at 3935 resulting in a decline of over 15%.

There was extreme volatility preceding and immediately after the release of the April CPI report in both the dollar and gold. 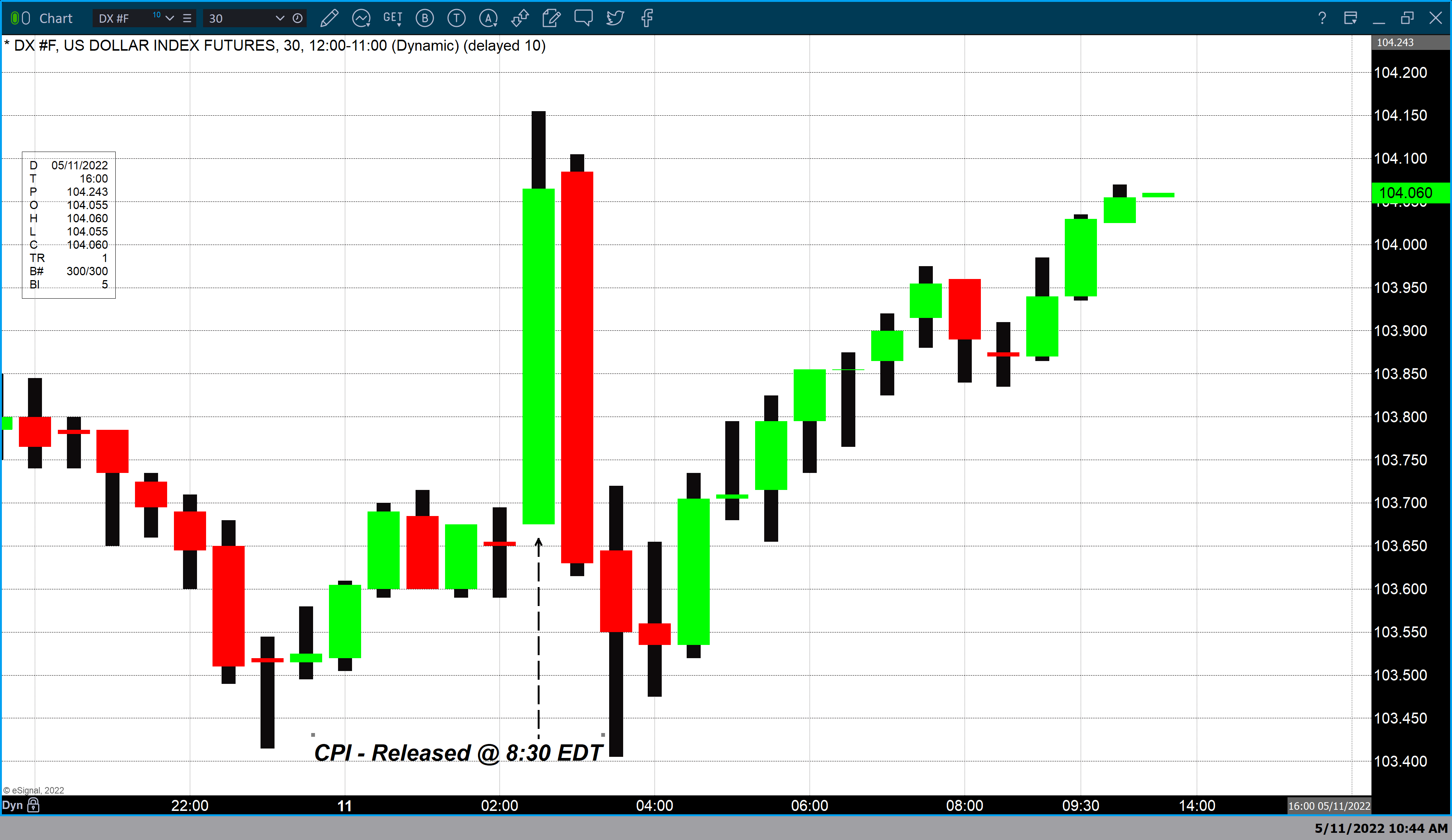 The chart above is a 30-minute candlestick chart of the dollar index. The arrow points to the candle which represents the release time. Beginning at 8:30 AM and concluding at 9:00 AM EDT. The candlestick before that representing 8:00 AM to 8:30 AM EDT shows that the dollar index traded at approximately 103.65 before the release of the report. The dollar index was trading at 103.67 when the BLS released the April CPI report and during the first half-hour after the release of the report traded to a high of 104.15 and closed during that period at 104. 065.

The chart above is a 30-minute candlestick chart of gold futures. Just as in the dollar gold traders watched the precious yellow metal have wild price gyrations over the hour and ½ of trading following the release of today’s CPI report. Gold futures basis the most active June 2022 contract was fixed at approximately $1848 as the report was released and traded to its lowest value of the day of $1830.60. The following candlestick (nine to 9:30 AM EDT) visually shows the dynamic recovery with gold closing at $1849. By 9:30 to 10:00, AM gold futures would trade to $1857.80 today’s intraday high. As of 5:05 PM EDT the June futures contract is currently up $11.20 or 0.61% and fixed at $1852.20.

The report released by the BLS is 37 pages long, and takes more than a glance to glean for details. This is a possible explanation for the strong knee-jerk reaction and key price reversal in both gold and the dollar lasting approximately one hour after the report was released.

However, the takeaway is simple. Inflation will remain extremely high and persistent for the months ahead. There is no indication from today’s report that suggests inflation has peaked. Although there was a small downtick one must factor in that the current level of 8.3% is a comparison to April 2021, when inflationary pressures had already begun to rise. The report also revealed that the core CPI that strips out food and energy costs rose by 0.6% in April.

“The index for all items less food and energy rose 0.6 percent in April following a 0.3-percent advance in March. Along with indexes for shelter, airline fares, and new vehicles, the indexes for medical care, recreation, and household furnishings and operations all increased in April. The indexes for apparel, communication, and used cars and trucks all declined over the month.”

Today’s report resulted in some analysts anticipating that the Federal Reserve would become more hawkish and implement a rate hike of 75 basis points. This is in contrast to Chairman Powell's statement at last week’s FOMC meeting, that a “75 basis point rate hike is not on the table”.

While the Federal Reserve will maintain an aggressive stance, I believe that they will continue to raise rates by half a percent (50 basis points) as needed rather than move to a more aggressive rate hike at the remaining FOMC meetings this year.

Lastly, the Federal Reserve is still stuck between a rock and a hard place as the key components of inflationary pressure are not just a byproduct of demand. The current level of inflation has based upon supply chain issues that are tied to products shipped from China and the war in Ukraine. A more aggressive monetary policy by the Federal Reserve will never have the ability to resolve those issues.