How to forecast prices in a supercycle

An increasingly common question over recent weeks and months has been “what is your long-term price for [insert battery material here]?”

And it's a really important question. Because, at the end of the day, companies and investors need to understand whether to pull the trigger on a new project and that decision comes down to whether a project can make money across the entire cycle rather than just in a few years of supernormal prices.

And this juxtaposition between current elevated prices, what price levels might be at in five years and what they might be at in 15 years is the key to valuing projects, and companies, in a supercycle.

Now, I started my career in equity and commodity research just before the China commodity supercycle and I've been through this before. And I can tell you that price forecasting in a supercycle is totally different from how one would forecast prices in a normal cycle.

So before I talk about where many are going wrong, I just wanted to break down which types of people are looking at forecasting battery materials prices. The four key groups are:

I'm going to come straight out and say that most of this article probably won't be of interest to traders. Traders normally focus on the short term – the next 5-10 days, maybe three months, maybe (sometimes) 12 months. Where the price is going to be at in five years doesn't really matter for most traders.

But for all the other groups, this article will be important. Some equity investors may be focused on the very short-term, but most will want to understand the medium and long-term as well. PE and industry investors are mostly looking to value a company or project over a minimum 15-20 year investment horizon. Price levels in the medium term will have a substantial impact on overall valuation.

It's probably most important for equity investors who, along with a DCF, may also utilise a current year or one year forward EV/EBITDA or PE ratio approach for valuation purposes. How expensive a stock looks compared to other commodities/materials or sectors is thus very important in the decision making process.

Before we go into the issue of what's different in a supercycle, I just want to recap on the main  approach to price forecasting on the sellside. Even though I'm a buyside analyst now I was a sell side analyst for many years and in charge of formulating commodity and material price forecasts for many of them.

So a sellside price forecast chart for lithium at the start of this year might have looked like the chart below. 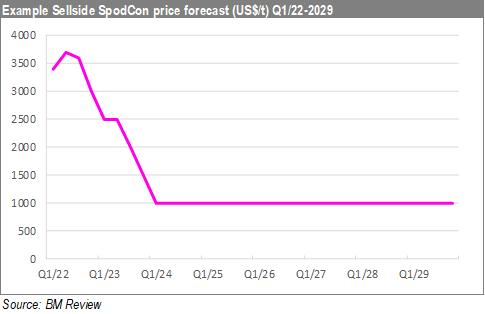 In this chart, the analyst has forecasted explicitly for each quarter in 2022, made rough assumptions for the first and second half of 2023 and then the forecast falls to their long-term price for the rest of the period.

But it's completely wrong for a supercycle.

Why are supercycles different?

That is not picked up at all in this approach.

The chart below shows copper prices in the China supercycle event. There are a number of takeaways: 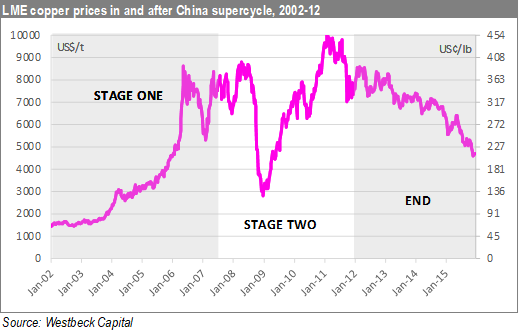 History of the China FAI supercycle

2001 was a pretty major recession. It was when the dot-com bubble burst. Prior to that industrial metal prices had been falling in real terms for nigh on 30 years. The metals industry was very much out of vogue and very few people had any idea that what was about to happen could happen.

In the early 2000s China had started to emerge and embark on a major period of growth. A very small number of China specialists knew about this and started to put together work on what an emergent China might mean for global markets in general and global commodity markets in particular.

In 2002, there were signs that we would move towards a cyclical economic recovery by the end of that year. At that point GDP growth (and commodities demand) was driven by the Western World consumer, which meant primarily the US and European consumers.

The emergence of China changed all that. We know now that China's fixed asset investment event was huge, and led to it becoming by far the biggest consumer in the world for metals, but we didn't at the time. We suggested that its growth could be substantial, but we didn't really start to get our heads around how substantial it could be until 2004-05.

In the mean-time China's demand was clearing out inventories of raw materials to virtually zero and prices were reacting. And they carried on reacting until mid-2006. Copper prices went up by nearly six times, other commodities with smaller market sizes saw prices go up by considerably more.

But eventually we reached a period in 2006 when price growth stalled. Why did growth stall? Demand destruction. By 2006 most analysts had got their head around the fact that the China FAI cycle was real, that it was big, and that it was a long-term event. Most forecasts suggested that the supply/demand imbalance would persist for many, many years to come.

But prices didn't go up any more. And eventually prices went down. And then they went up again and they were cyclical for a few years until the GFC when they went down again, but much more this time. And then, after the GFC, when China's government announced a massive stimulus program, they bounced up again in a big way.

Where are we in the battery materials supercycle?

The reason for the history lesson above is to ask where we are currently in the battery materials supercycle? Well it's fair to say that, as in the China FAI event, different materials have had different price behaviour. But there's no doubt that lithium chemicals prices have been out there in front as the flag bearer for this event.

Lithium prices are up by 10x since the Q3/20 lows. Nickel prices have doubled, cobalt ditto, with graphite prices a lot slower to move, and no visibility in high purity manganese. Some electrolyte additives and lithium iron phosphate prices have also risen by multiples.

So, for lithium, I would say that we're towards the end of stage one. For the other battery materials we're still squarely within stage 1 in my view.

Why do I say that? Well namely that lithium prices have increased by so much, it's going to be difficult for the EV and ESS industry to pay a lot more for lithium from here. Lithium producers are already generating huge profitability at these levels and prices don't really have to go higher to make investment in lithium attractive. If prices go substantially higher than current prices we're likely to see moves to consider other technologies (ie long-term demand destruction), which won't be great for the mining/lithium production industry. 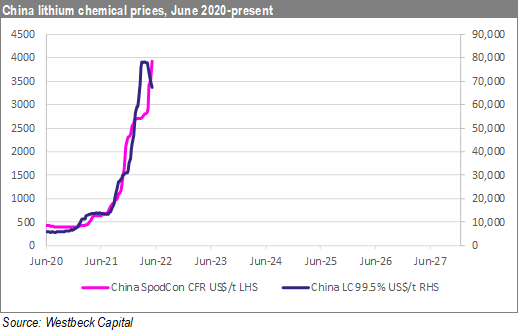 A different approach to forecasting prices

If we use the normal sellside approach for forecasting prices and explicitly forecast for the next 4-6 quarters, but then drop to our long-term prices, then we might get forecasts that look like the chart below. 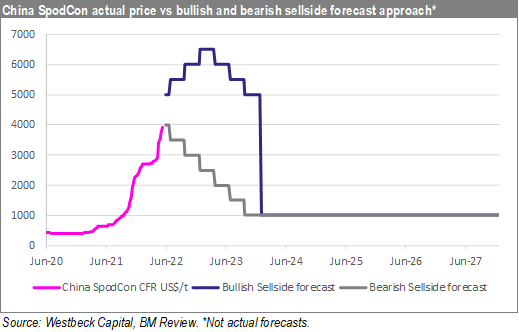 If I'm using an earnings multiple-based approach to value the stock then I would get a widely different valuation, but if I'm using a DCF then the valuation impact is not actually that different (over the length of a 20 year project), providing I leave other factors unchanged.

But, if I'm in a supercycle, this preferred sellside approach (even if the analyst is bullish on the lithium price) materially understates the medium-term earnings potential of an asset.

Which is why I think a different approach is justified. If we go back and look at the copper price chart for the China supercycle, I identified two different stages of the supercycle. The rapid price increase Stage and Stage 2, where the price trades around a mean level, almost like a plateau. 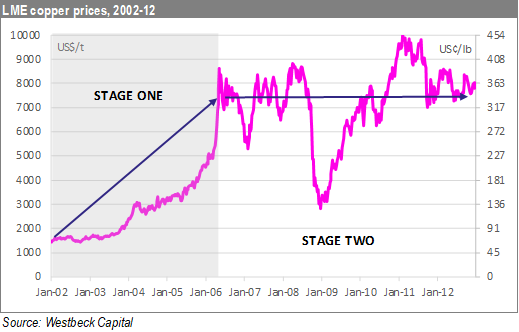 And that's what I use in my forecasting. I explicitly forecast the next quarter if necessary (because realistically that's all I've got visibility for) to understand where I think prices should be for reporting stocks (and to understand whether current valuations are factoring that in or not) and then I set a plateau price, before eventually coming back to my long-term price at the end of the period of supply/demand tightness.

How long should the plateau be? I've extended mine twice in this cycle because I've begun to gain a better understanding of the duration of the period of undersupply. My plateau stage is now five years long. I can't see a plateau stage going materially longer than 6-7 years because, all things being equal, it should be possible to build new supply within 5-6 years. More fool consumers if, with prices going to supranormal levels, they don't make capital available for more raw material supply…

My long-term price forecast has also been increased in recent months as we start to experience the impacts of inflation on operating costs and realistically on capital costs, going forward.

The plateau approach also allows me more flexibility as an analyst to change my forecasts if prices continue to rise (I can just reset up if necessary). I'm fully committed to the view that prices will be cyclical within the stage 2 period. I don't try to forecast them explicitly because that's impossible so far out but I need to include an understanding that prices will not fall down as far as my long-term prices for quite an extended period. 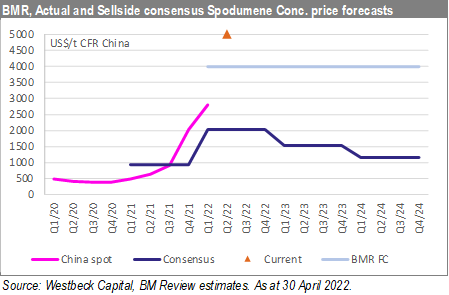 I'm not going to say it's my way or the highway, but the plateau approach allowed analysts to make a more realistic valuation of stocks in the last supercycle and I believe that it will do in this supercycle as well. Current forecasting methodologies are materially understating the valuations of raw materials production and development companies.