Because "all" are talking about them, we're starting with stocks, beginning with this from the "It's Not About Us Dept."

The S&P Futs went on from that written instant to drop another net -3% in settling the week yesterday (Friday) at 3902.

Yet, from the "Nothing Moves in a Straight Line Dept." we acknowledge the S&P has settled as "textbook oversold" for 22 consecutive trading days: that is quite a string; however 'tis nowhere near the four-decade record of 41 consecutive trading days in said condition which we witnessed during the DotComBomb. Our expectation near-term from here is that the S&P unwind said "oversold" stance, whilst remaining in the broader downtrend toward the noted support zone. (For you WestPalmBeachers down there, that means we don't expect the stock market to close lower every day; but there's still quite a way down to go before we reach this year's low).

And yet the doom 'n gloom crowd sees far worse: we read this past week of "The Dow" (that index at which our parents used to look) having the 24,000 level in its crosshairs, (Friday's settle being 31,262). The correlation between "The Dow" and the S&P is hardly as tight as it used to be, but that target "suggests" the S&P finding itself in the 2900s, well below our support zone.

Still, toward maintaining perspective, the COVID S&P low was 2192 (23 March 2020); moreover had COVID not been created and had the S&P maintained its regression channel from the FinCrisis low of 13 years ago through this past week, 'twould today be 'round 3400: well fancy that, the midpoint of the 3600-3200 support zone; you can't make this stuff up. Indeed all the COVID "proceeds" that went into the stock market merely are now coming back out as folks need more dough to keep their lives on the go as stagflation continues to grow.

For Gold, which settled the week at 1845, the end-of-the-world crowd put forth a scenario this past week for a price of 40,000. We're content to realistically maintain a tenth of that per our Gold Scoreboard level of 4141. But when markets go kerplooey (technical term), extreme prognostications come out of the woodwork. Thus toward keeping our own feet on the ground:

■ hardly are we that bullish on Gold: we just expect it to trade at its currency debasement value (4141), which conservatively is but one of the 3Ds of Debasement, Debt and Derivatives; and

■ hardly are we that bearish on the stock market: we just anticipate earnings again being the primary determinant of price as has always ultimately occurred throughout the 65-year history of the S&P 500.

Speaking of profit growth (or lack thereof), Q1 Earnings Season just concluded. And specific to the 453 S&P 500 constituents which reported within that seasonal period, a full third did not improve over Q1 of COVID-infested 2021. Should not 100% have improved rather than just 67%? ('Course, 77% beat "estimates" which evidently is more important than actually making more money). Oops... we're not supposed to say that... To reiterate, the S&P's lifetime "live" price/earnings ratio mean is 22.3x vs. the current 29.7x level. Therefore: either earnings get on the go, else we've further price fizzle to go. For the S&P's "live" P/E always reverts to its mean.

And have you noticed "all" are saying the Bond market is tanking? Except that it has recorded only two down days in the last ten. Clearly "all" are not watching the website's Bond page; rather they're just parroting what "all" are saying. That noted: debt yields remain nearly double that of the S&P, and you know with the former you'll get back your dough, whereas with the latter you don't know. Uh-oh...

'Course as you'll recall, we saw the stark technical harbinger of it all going wrong some four weeks ago per this S&P graphic, now reprised. Already stocks' fizzle had started and now continues to further: 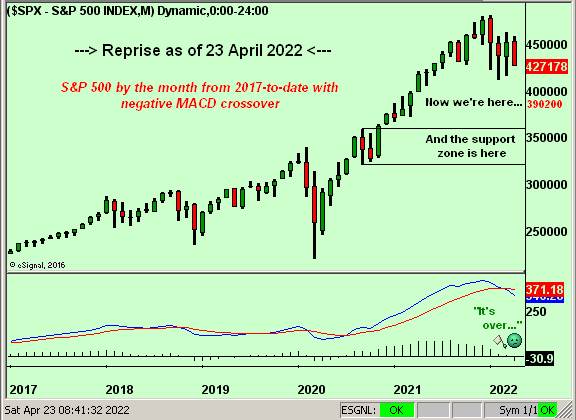 As for Gold lacking sizzle, obviously 'tis due to 1) it clearly being classified as a relic, 2) the "M Word" crowd, and 3) Dollar strength. That's the trifecta: relegation to the dustbin, manipulation, and termination of trust otherwise accorded the Federal Reserve Note. You tell 'em there, Alex baby:

Indeed, the Dollar still is winning the Ugly Dog Contest, continuing to prove that the more there is of something, the more 'tis worth. Don't believe it? As measured from better than one year ago per the week ending 19 February 2021, the StateSide "M2" money supply and the Dollar Index are now both +14%. No kiddin'.

The good news for Gold is that its 1854-1779 critical support zone is holding as here we've price by the day year-to-date, the RUS/UKR spike 'n fade moving more left of the page:

But more broadly per Gold's weekly bars from this time a year ago-to-date, we find the parabolic Short trend still in force, the rightmost red dots having just completed their eighth week of decline:

"Maybe this last low is the bottom as price finished the week pretty strong, mmb..."

Indeed, Squire, we worry little over these periodic Gold declines. The one over which to really worry is that for the Economic Barometer. As herein indicated a week ago, 'twas anticipated to be a bad week for the Baro. Again, no kiddin'. Have a look:

Indeed, 11 of the 13 incoming metrics for the Econ Baro were worse than their prior reads. But rather than enumerate them all, let's just focus on one: The Conference Board's Leading Indicators, which of course we've referred to for years as "Lagging", (given the Baro leads them). And for April, they changed by a two-year low of -0.3%, which you Econ Baro followers already could see coming. (Please alert the FinMedia). And now of note for the ensuing week comes the second peek at Q1 Gross Domestic Product stagflation, the nominal number to remain negative and the Deflator positive. In other words, the worst case scenario continues. Feel the squeeeeze...

Meanwhile Gold is attempting to unsqueeze itself from the aforeshown parabolic Short trend. For as we next see on the left in the three-month panel of the daily bars, the baby blue dots of regression trend consistency are beginning to curl upward: upon their crossing above the -80% axis, one ought look for higher price levels. Then on the right is the 10-day Market Profile, appearing far less congestive than 'twas a week ago, the trading support and resistance prices as labeled:

With the same drill for Silver, her "Baby Blues" (below left) are already poised for higher levels of price, whilst in her Profile (below right) there is at present no trading resistance. C'mon Sister Silver!

Thus with all that upon which to chew, we've three quick quips to see you through:

■ Apparently, iconic ole Walmart is offering $200,000 per year to be a "store manager". Now: either they've put the comma in the wrong place, or -- given stagflation -- today's $200k is yesterday's $20k. Regardless, $200k is four times the average StateSide full-time annual salary of $49k (per ZipRecruiter). Oh to be young again.

■ St. Louis FedPrez James "Bullish" Bullard sees markets as having (in the words of Dow Jones Newswires) "priced in central bank tightening", and furthermore that the outlook for the economy appears "solid". Please fax to him the Bond yield (3%), their own gauge of inflation (5% Core PCE) and the Econ Baro.

■ And speaking of the aforementioned wire service, there's something out there called the "Wall Street Journal Future of Everything Festival" (what?) 'Tis where FedHead Jerome "Jumpin' Jay" Powell just put forth the notion of curbing inflation (too late) without putting the economy into recession (already into a fourth consecutive quarter on a REAL basis) notwithstanding challenges (yet again, no kiddin'). As written a week ago, the Fed is the last place you'd wanna be working these days; (see above "Walmart" opportunity).