Signs are pointing to gold's May rally running out of steam as the USDX reaches its short-term bottom. But how much stamina is left in the yellow metal?

Another day, another higher close in the junior miners. And another day where profits on our long positions in the latter increased. There is a sign that the rally in the precious metals sector is close to being over.

That sign is the situation in the USD Index, and the shape of the gold-USD link. 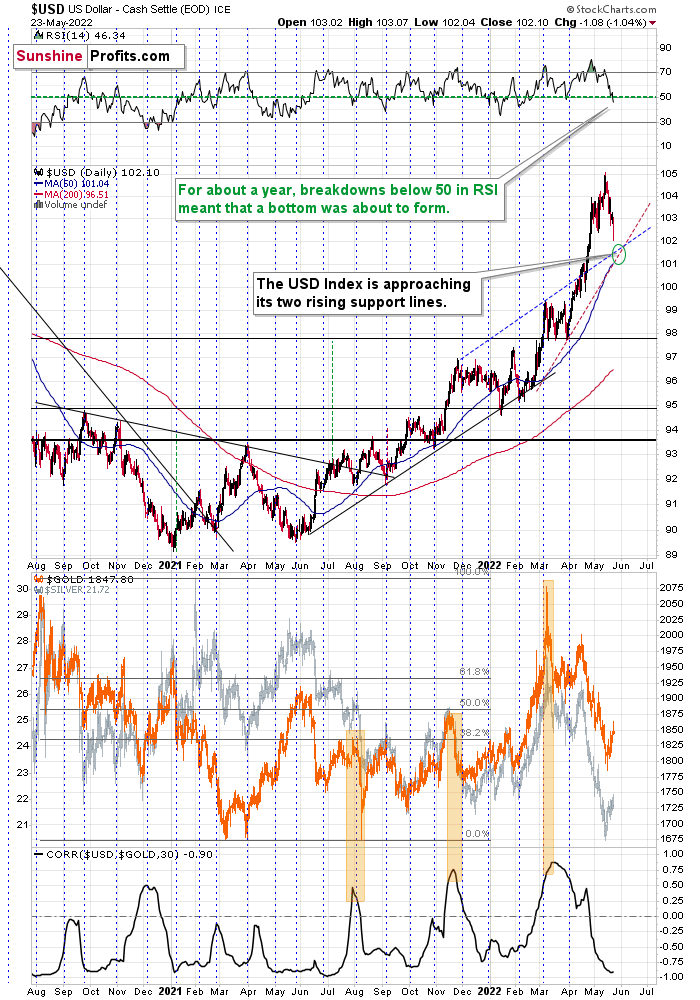 Starting with the gold-USD link, please note that while gold ended yesterday's session higher, it was only ~$6 higher. Given that the USD Index declined by over one index point, it would be "normal" for gold to rally much more.

That's a sign that gold is getting "exhausted", which is another way of saying that the buying power for this particular rally appears to be drying up. Of course, one swallow doesn't make a summer, but given the size of USD's decline, it's quite notable.

USD's decline took it below its recent lows, and since it's slightly down also in today's pre-market trading, it seems that it can now decline further in the very near term. "Further" here shouldn't be viewed as "by a lot". In fact, there is a combination of rising support lines just above where the USD Index is trading right now.

The dashed lines: blue and red one are likely to stop this correction. Of course, it's not 100% certain, but the fundamental situation continues to favor higher USD values (rising real interest rates), so significant changes don't appear likely. The possibility is there, especially if the geopolitical situation changes, but it's simply not likely.

Besides, the RSI just moved below 50, and while this doesn't mean anything based on "classic" interpretation of this indicator's signals, I would like to emphasize that practically each time when we saw something like that in the past year or so, it meant that the USD Index was about to bottom.

So, on one hand, gold no longer "wants" to react to the USD's weakness, and on the other hand, the short-term bottom in the USD Index appears to be at hand.

Gold itself still didn't correct as much as it did after previous cases when the RSI touched the 30 level. I marked the smallest rallies that followed this signal in the recent past with blue, dashed lines.

If history is about to rhyme, then gold's rally might be nearing its end, but it's not yet there.

And what about the junior mining stocks? 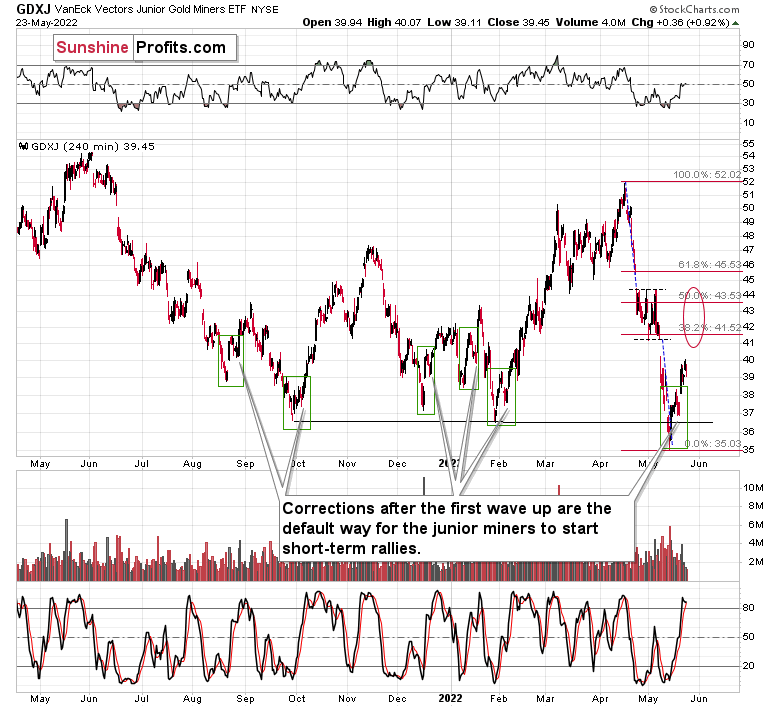 The USD's decline appears to be close to its end, and the same goes for the end of the short-term rally in gold, which means that the same fate likely awaits the junior miners – their rally too is about to end, in my view.

The target area that I placed on the above chart remains up-to-date. Yesterday's weakness in gold relative to the USD Index tells me that it's more likely that the rally will end in the lower part of the target area – probably close to its early-May low.