Friday's CPI report will guide the FOMC meeting next week

The Federal Reserve has stated on multiple occasions that decisions regarding revisions to their monetary policies and forward guidance is data-dependent. Lately, the Fed has been focused on combating the current level of inflation, placing their inflationary concerns first and foremost rather than having equal concerns regarding their dual mandate which is maximum employment and inflation. With that in mind, market participants are intently focused on Friday's CPI inflation numbers for May 2022.

Unlike the PCE inflation index, the CPI index includes current inflationary pressures stemming from both energy and food costs. Given that crude oil futures are currently trading for $122.41 per barrel, last month crude oil was still exceedingly high at approximately $105 per barrel. This will most certainly continue to highly impact the CPI numbers that will be released on Friday. Food costs have also not subsided over the last month and will most certainly influence the CPI inflation index keeping current inflationary pressures hot.

The expectations that inflationary pressures will remain exceedingly high were expressed yesterday by the U.S. Treasury Secretary Janet Yellen in her testimony to the Senate Finance Committee. As reported by Reuters news service, "Yellen said that the United States was dealing with "unacceptable levels of inflation," but that she hoped price hikes would soon begin to subside."

The Treasury Secretary also reinforced her views that "inflation was being fueled by high energy and food prices caused by Russia's war in Ukraine, a shift to goods purchases during the pandemic, and by new COVID-19 variants and persistent supply chain disruption."

It is highly anticipated that the Federal Reserve will announce another interest rate hike of ½ a percent, or 50 basis points after next week's FOMC meeting on Wednesday, June 15. According to the CME's FedWatch tool, there is a 94.8% probability that the Federal Reserve will announce and enact another 50 basis point rate hike next week. 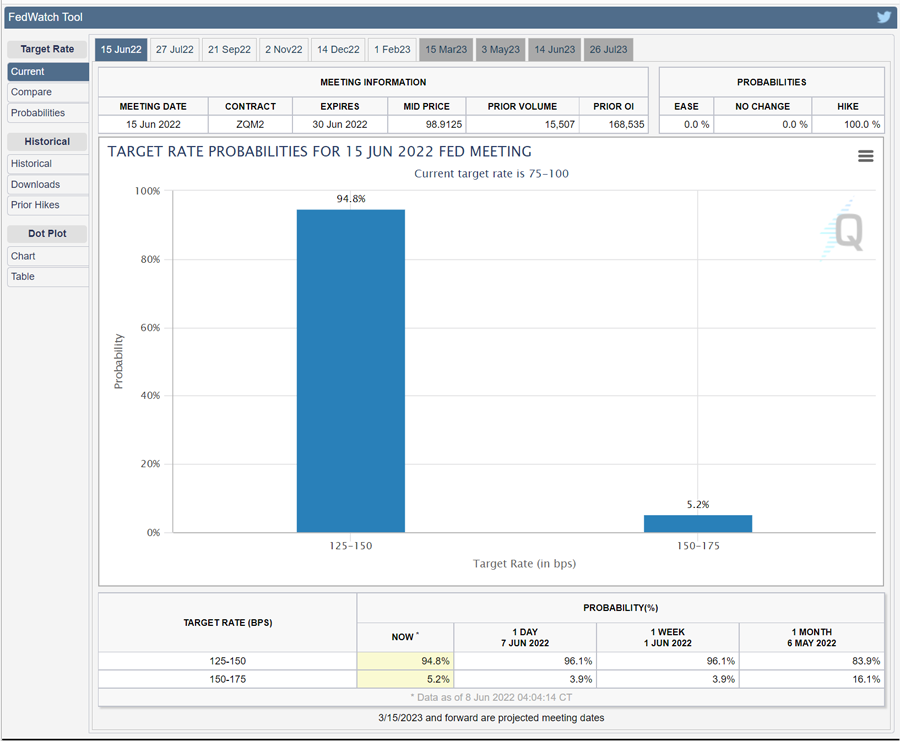 This has resulted in gold prices remaining confined to a tight and narrow trading range which continued throughout today. As of 5:35 PM EDT gold futures basis, the most active August 2022 contract is currently fixed at $1855.60 after factoring in today's net gain of $3.50 or 0.19%.