Today the U.S. Bureau of Labor Statistics released the CPI (Consumer Price Index) for May. The report confirmed what North Americans have known and been entrenched in; the fact that inflation continues to spiral out of control, and is now at the highest point in 41 years. The CPI rose 0.3% in April. This takes last month’s inflationary pressures to the highest year-over-year (YoY) change in 41 years. This means If you were born at or after 1982 you are witnessing and living through the highest monthly uptick in inflation (YoY) ever. 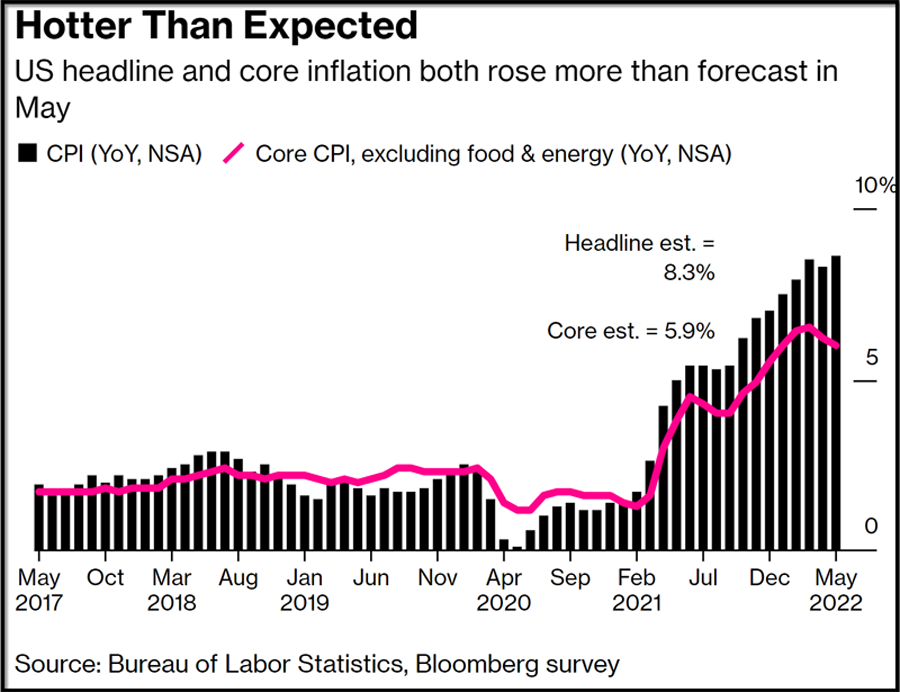 Economists from all three poles got it wrong. Economists polled by Bloomberg, Reuters, and The Wall Street Journal all underestimated the MoM rise in inflationary pressures.

The largest contributor to this major uptick in inflationary pressures is the cost of energy which rose 34.6%. However, almost all components recorded record-breaking increases including food costs which rose an average of 10.1%. The cost of housing increased by 5.5%, and commodities as a whole increased by 8.5% all on a year-over-year basis.

What this means for consumers; more hardship ahead

Considering that average hourly earnings fell by 3% in the last year and costs of the goods and services they need have risen dramatically equates to more hardship for low and middle-class Americans. This also means that newly acquired debt (mortgages, new car loans, etc.) will not only be harder to qualify for, and they will be more expensive to service. Existing balances will also be dramatically impacted. Variable-rate credit cards will increase making existing balances more expensive to service.

The Federal Reserve will hold its June FOMC meeting on Tuesday of next week and conclude on Wednesday. While a minority of economists are anticipating a rate hike of 75 basis points (3/4%) the likelihood that the Fed will get more aggressive on the size of monthly rate hikes is extremely minute. The most likely forward guidance of the Federal Reserve is to continue to raise rates by 50 basis points after the remaining FOMC meetings this year. The question becomes how many 50 basis point rate hikes will the Fed implement, and what will the Fed’s funds rate be by the end of the year?

As we have been addressing for many months now our belief is been that inflationary pressures have not peaked and in fact will continue to rise as long as the underlying cause continues to be persistent. We have been highly vocal in our opinion that the current forward guidance of the Federal Reserve will not move inflationary pressures lower. At best higher interest rates will contract the economy to such an extent that it will result in a recession. At worst that their actions will be detrimental fueling inflationary pressures higher. The current level of inflation and the current forward guidance of the Federal Reserve will be highly supportive of gold prices moving them higher over the course of the next two years.