Friday's all-around bad CPI print jolted markets out of their bear market rally and back to pricing a hard landing outcome. Risk-off breakouts are occurring everywhere (currencies, bonds, credit, equities) except in commodities, which remained spared from the general market mayhem. Volatility indices for currencies (JPMVXYG7), Treasuries (MOVE), and equities (VIX) are all set up for a synchronous move higher. But when combined with CDS spreads also at breakout levels and market depth at such low readings, the combination in the past has proven deadly for risk assets. The last equity market selling leg that ended ~May 20 was generally well hedged (i.e., not a real sell-off), blunting gold's response. This time, the overall macro backdrop was worse than the previous selling leg several weeks ago. I do not have access to such data, but I wonder how much put delta will be rolling off this OpEx. If this hedge protection rolls off, then there should be a need for more safe-haven assets into the next quarter. The volatility curve is elevated and flat (~+30), making vol protection expensive if further protection is chased.

The chart below shows that IG CDS spreads are making new highs, while equity market depth (inverted axis) is making new lows. ALLVOL2 (orange line) is a combination of weighted equity, bond, and currency volatility. If we see another leg higher in volatility, gold will likely follow in time. Relative to these stress markers, gold appears too low if market protection hedges expire into OpEx. But ST, the move in yields is near impossible for gold to ignore given that CTAs/quant-types are dominating the tape. 2-Year US yields have shot up +70bps, and US 10-Year TIPs yield are up +42bps in two weeks. Markets respond more to the rate of change than the absolute level in stress environments. DXY is also on the verge of breaking into new fresh highs. The spike in yields and USD would be problematic on their own, but when the stress factors are added up, there will be another degrossing/derisking event whether by choice or it will be forced via VaR rules (the latter is far worse for everything). 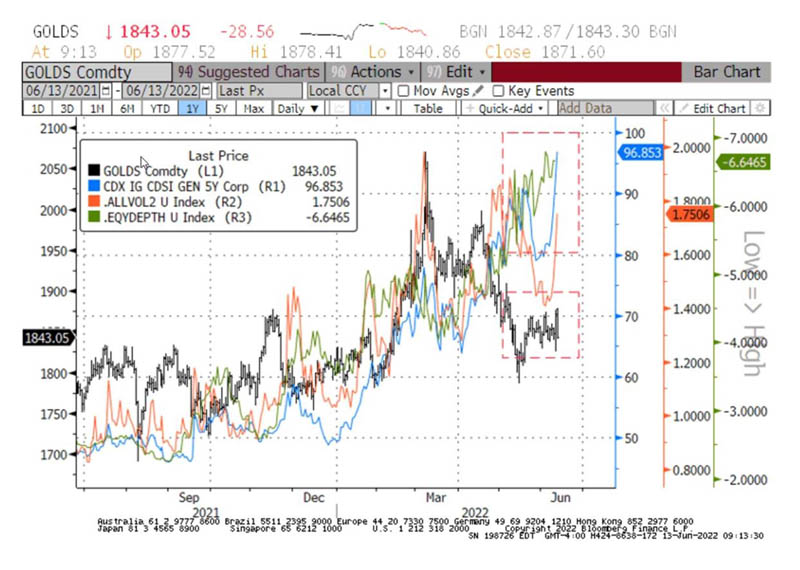 This week will see two significant events: FOMC on Wed and OpEx on Friday. I am not sure anything I type will mean much until these two events settle out. Since Q4, the Fed had intimated that one of the main tools to reign in inflation would be via the wealth effect (reduce inflation without a recession) by tightening financial conditions (GSFCI Index). FCI is made up of four main components: equity, rates, credit, and currency. Given the choice of increasing rates, until rates volatility becomes destabilizing, runaway wider credit spreads, and a much stronger USD choking off funding flows, the path of least resistance is to hammer equities lower. The message the Fed will put out is that they are essentially "selling strangles" (selling calls, buying puts but way, way lower than anyone can stomach).

Housing prices have also peaked, and the downward pressures will continue. This part of the wealth effect decrease has just started and whether something breaks here or not is an open question.

The Fed is undoubtedly happy about the destruction of speculative areas of the market. The chart below shows my speculative index (unprofitable tech, ARKK, IPO, PBW, XBI) along with XBT (bitcoin). The speculative index drawdown is -70% with more downside to go. It has given up the entire post-Covid liquidity surge. The speculative index also leads bitcoin and I am looking for bitcoin to settle in the $12,500 area (-80% drawdown, to match the other -80% drawdowns). There are others that are far more knowledgeable on cryptos than I am, but to me, it looks like the entire alt-coin universe is going to zero, and the stable coins are de-pegging and redemption gating themselves into oblivion. Of the 19,845 known cryptos out there, there will be a mass extinction event, probably leaving bitcoin as the lone viable survivor. I wish I could chart an unweighted crypto chart. 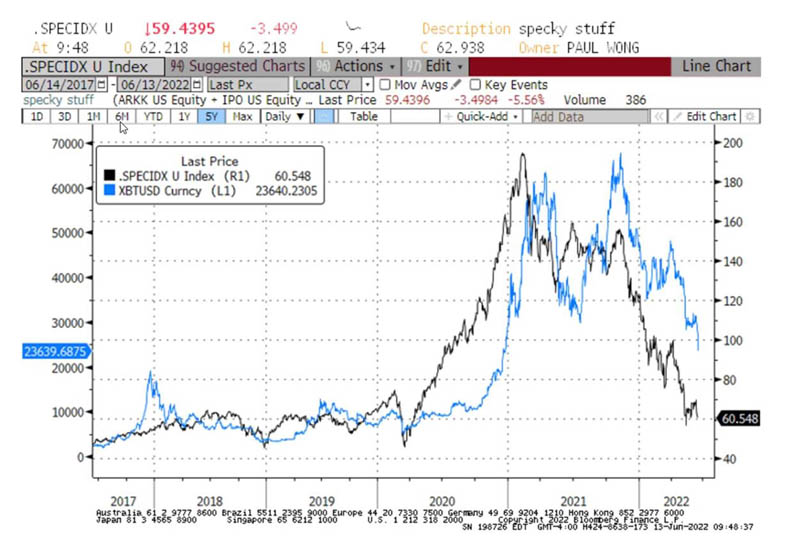 Just so I do not get accused of schadenfreude, once losses are realized, the market will think more about capital preservation and safe-haven asset strategies rather than the post-GFC world of Fed supported never-ending higher markets and magic unicorn investing. But before that happens, we are going on a wild ride.