All of the financial markets are continuing to react to last week’s CPI inflation report. The CPI increased by 1% in May taking year-over-year inflation higher by 8.6% which is the largest gain since December 1981. The largest inflationary drivers continue to be food, energy, and housing.

Last week’s CPI report will most certainly have a profound impact on the Federal Reserve’s FOMC meeting which will begin tomorrow. While there is a minority of economists that are predicting a 75-basis point interest rate hike, most analysts including myself believe that the Federal Reserve will continue to implement 50-basis point interest rate hikes in June, July, and possibly September FOMC meetings.

Concerns about rising inflation led to bearish market sentiment and selling pressure. The net result was sharp declines in U.S. equities, precious metals, and cryptocurrencies. This major selloff occurs in conjunction with sharp rises in the U.S. Treasury yields and the U.S. dollar. Crude oil continues to trade at elevated levels above $100 per barrel with crude oil futures currently fixed at $120.95 per barrel.

U.S. equities sold off sharply today with the NASDAQ composite scoring the largest decline of 4.68% or 530.79 points. The Standard & Poor’s 500 lost 3.88% or 151.23 points. The Dow Jones declined 2.79% and is currently fixed at 30,516.74. The chart above is a daily chart of the S&P 500. The Standard & Poor’s has closed lower for the last three consecutive days creating two large price gaps between Thursday’s and Friday’s trading session and in Friday’s session versus today’s. This index has lost almost 10% since the close on Tuesday, June 7.

The selling pressure was not contained to equities as concerns about more aggressive interest rate hikes by the Federal Reserve resulted in dramatically lower prices for both gold and silver. As of 4:46 PM EDT gold futures basis, the most active August contract is fixed at $1822.60 after factoring in today’s decline of $52.90 or 2.82%. This decline resulted in gold prices breaking below their 200-day moving average and its 78% Fibonacci retracement level. 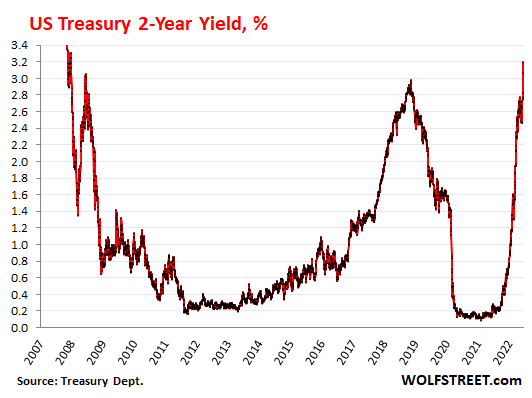 Both the dollar and yields on U.S. Treasuries spiked sharply higher today in anticipation of the Federal Reserve aggressively modifying its monetary policy to try and stabilize the spiraling level of inflation. The dollar index gained 1% in trading today and is currently fixed at 105.055. Two-year Treasuries yields gained 23 basis points on Friday and another 14 basis points today to take the current yield to 3.20%. This is the highest level for the two-year Treasury notes since November 2007.