And specific to the Fed we begin by quoting the title of the 1966 Bob Hope film "Boy, Did I Get a Wrong Number!" For firmly put forth herein a week ago was that the Federal Open Market Committee would vote to raise their Bank's Funds rate by +50 basis points. "Wrong!" as +75bp was the winning plea (although not in unanimity, thank you Esther George, FedPrez KC).

Regardless, the overnight target range to borrow from the Fed Window "Next in line please!" is now 1.50%-to-1.75%. Moreover with FedFundsFutures having settled yesterday (Friday) at 2.465%, another +75bp is thus the "expected" hike in the FOMC's 27 July Statement.

However, with all due respect to the Fed -- which throughout its 108-year history has on balance beneficially created wealth for the masses -- we are nonetheless becoming ever more justifiably concerned. To wit:

Some half dozen or so times per year, the FOMC gathers for two days to produce their Statement on the economy and thus their cost of money. 'Tis a fair guess that the majority of you access the Statement's information from your FinMedia outlet of choice, which is our source of last resort. Instead, we regularly read the actual Statement upon its release. And for those few of you who perhaps do the same, no doubt you were astonishingly shocked by the Statement's opening sentence, quoted verbatim below in the Economic Barometer. Note: its data to the right of the vertical puke-green line is applicable to Q2's incoming metrics thus far. Even your eight-year old can tell at a glance if the economy (blue line) is improving or worsening:

Let's textually repeat that sentence, just for emphasis: "Overall economic activity appears to have picked up after edging down in the first quarter."

Straightaway we messaged our great and good colleague here as follows: "What are they smoking?", after which came the lead headline (hat tip PJ Media): "Is Everybody at the Federal Reserve on Drugs?"

Not only is the Econ Baro in full plunge from Q1 right through into Q2, but the StateSide stock market as measured by the S&P 500 (red line) has all but reached down to its 3600-3200 support zone, (a corrective level to which we alluded a-way back on 29 January when the S&P was 4432).

"It all fits with the Philly Fed Index and Retail Sales turning negative, huh mmb?"

Amongst other negative data, yes, Squire. And we'd actually thought the Econ Baro might have gotten a relief week, but no. 'Course, all this happens when the economy is stagflatively shrinking, which on a REAL basis it has been doing for what appears to now be a fourth consecutive quarter.

And yet, Dow Jones Newswires just queried "Are We in a Recession Now?" (We'll sympathetically credit them with their asking a rhetorical question). But 'tis OK as Ex-NY FedPrez Bill Dudley stated at the "WSJ CFO Summit" this past week that we shan't have a near-term recession. Dudley, dude: "It's ON!" Honestly folks, sometimes ya gotta through your hands up in the air in sheer wonderment. Oh, and let's not forget this award from the "Way Behind the Curve Dept." which goes to those economists having participated in a just-published FT-IGM Survey (impressive) for concluding that the "US [is] set for recession next year" Who knew, eh?

Thus per this week's title we first started with the Fed; now let's segue into Gold, the ongoing state of which remains in the "dead zone". Price settled yesterday at 1842, a level at which it has traded in each of the past six weeks. Again cue Chris Isaak from back in '95: "Goin' Nowhere"

And we can get the show on the road by eclipsing the descending red dots of parabolic Short trend -- now at the 1928 level -- in the following chart of Gold by the week since one year ago-to-date. For as noted last week per our technical portrayal, Gold can regain at least 1900 by the Fourth of July, (14 trading sessions between now and then). Plus from the "Oh By The Way Dept.", Gold just recorded its third consecutive "outside week" in having made both a "higher high" and a "lower low". What has that induced historically? We've no idea: prior to now it has never happened this millennium:

As to our proprietary Gold internals, they remain anything but robust, such that some may turn away in disgust. But, the "M Word" crowd or otherwise, the market is never wrong, and per this next two-panel graphic we see on the left that Gold's "Baby Blues" of trend consistency have returned to their 0% axis, price thus trendless. Meanwhile on the right in Gold's 10-day Market Profile, the dominant overhead trading "support-now-resistor" is still 1852. Or as we recently said to a friend, if anyone asks you what is the price of Gold and you've no idea, just say "1852" and you'll appear impeccably in the know. Here you go:

The good news for Sister Silver is that not only is she profoundly cheap relative to Gold, (the Gold/Silver ratio today 85.2x vs. the millennium-to-date mean of 66.8x, by which Silver today "ought be" 27.59 rather than 21.63), but also that she is adorned in her precious metal pinstripes rather than in her industrial metal jacket. We know this because her two-panel graphic is a near-perfect copy of that for Gold:

As to the ensuing week, can it get any worse for the Econ Baro? Just a scant five metrics are due. Can it get any more awkward for the Fed? 'Tis a holiday week so perhaps the less said, the better. Can it get any lower for the S&P 500? Absolutely: currently 3675, the 3400 level may be becoming the "magic number", it being (as noted last week) a Morgan Stanley target, the mid-point of our 3600-3200 support zone, and right about where the S&P would today be had COVID not come to pass. That said, by both our MoneyFlow page and Market Values page, the S&P is due for some modicum of a bounce within the otherwise ongoing downtrend. And most importantly, can Gold move up from the "dead zone"? Indeed the NYSE specialist pictured below is seeking higher intervention as stocks continue their long-due declension. So think Gold, my friend, BEFORE its ascension! 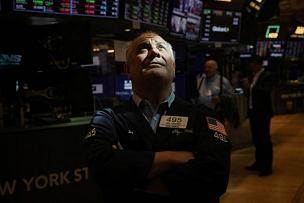