No dodging the bullet

S&P 500 recovered from the intraday reversal to the downside, thanks to tech. Value's poor showing can be chalked down to the riskier junk bonds losing early gains, meaning the daily stock market move didn't surprise much when bonds closing values are considered. What's though flying under the radar, is the turn in Treasury yields – a couple of days after FOMC, bonds are having second thoughs, and aren't pushing the Fed to raise too steeply. Anyway, I wouldn't be surprised to see 75bp hike in July, to be continued with a few more 50bp hikes then. Coupled with the balance sheet that's about to shrink, that would finally start denting inflation – at the cost of real economy growth.

I say growth while I was looking for a Q1 GDP print to come in negative, and Q2 GDP would turn lackluster as well. Still, a full-fledged recession in the usual sense of the word (the consequences), won't hit until very late 2022 even though NBER might declare one (based also on unrelenting inflation data) earlier. All the typical signs are in – we had yield curve inversion, oil prices doubled in a relatively short amount of time, and inflation is entrenched above 5%. Whatever the Fed does – and it'll do a lot – inflation in essentials won't be dented all that much. There's no dodging the bullet in my view, and the markets would gradually go from living the soft landing fantasy to readjusting to the hard landing reality to come.

Home prices would decline, consumer discretionaries, tech and communications would suffer. Even materials did this week. The only question is when would the Fed back off tightening – given that the very temporary peak in inflation with May data didn't happen, the central bank can be counted on being restrictive for good four next meetings. While that wouldn't break inflation to the almost forgotten 2% target obviously, the result would be its decrease to 5% or slightly less if they stay the course, which would be accompanied counterintuitively by lower yields (yes, I'm looking for quality debt instruments to turn up, which would be analogical to what we saw after peaking yields of 2007). Yes, supply chain issues will persist well into 2023, and China would come back online.

When it comes to currencies, the euro and yen would feel most heat – especially in Europe as a sign of recession approaching faster than in the U.S., the local stock markets are trading at considerably lesser multiples of forward looking earnings, and also the bond spreads between Germany and countries such as Italy are widening. In the U.S., the skies aren't getting too cloudy yet.

So, in this period of uncertainty – uncertainty driven by the Fed's tightening and the still growing balance at its repo facilities – the task is to prosper both in the disinflation to come, and in the recession approaching. One way to do that would be betting on the dollar, long-dated Treasuries, being still in commodities, and having exposure only to select stocks (namely energy and agricultural stocks).

Even though base metals (that's copper, aluminum etc) are and will be suffering, precious metals are likely to keep well bid, and then start rising again. Crude oil hasn't yet topped either – the dust after Friday's steep selloff would settle as I don't see either demand declining or supply rising this year – we aren't in a manufacturing recession yet (that would come towards the end of 2022).

Let's get into the key charts (all courtesy of Stockcharts.com) for today – stocks: 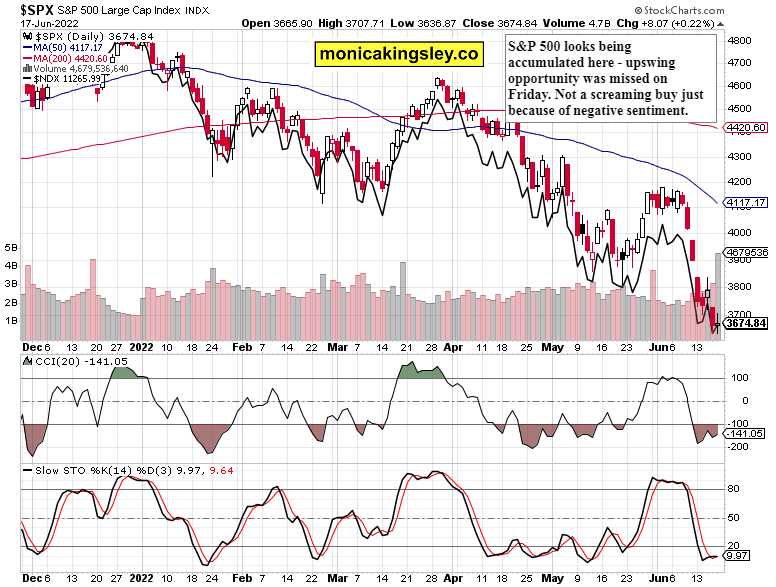 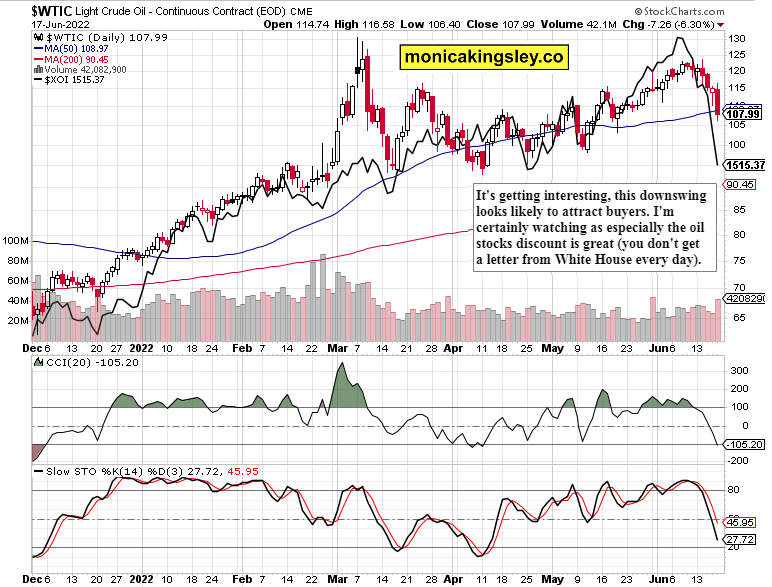 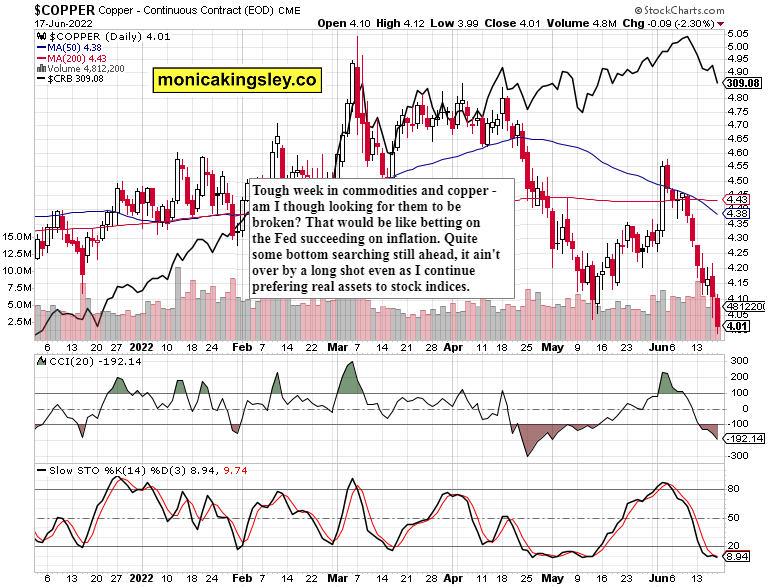