If an investor wants to stay ahead of this volatile market climate, all they need to do is call a doctor. Copper has been referred to as "Dr. Copper," because, per Investopedia, 'it has a PhD in economics and can predict turning points in the global economy.' It's not just a safe-haven metal though. Copper is integral to the floundering chip sector, serving as an interconnect in semiconductors to reduce propagation delays and power consumption. Monitoring copper –and how speculators are playing it-- can help an investor time market rotations.

The chart below, from Schaeffer's ever-reliable Senior Market Strategist Chris Prybal, shows copper at its Covid-19 lows around $2 per contract. In the ensuing frenetic recovery, copper's highs stretched past $5 per contract. Now, the metal has pulled back to $4 per contract, an area that was home to previous highs in late 2008, at the peak onslaught of the financial crisis. 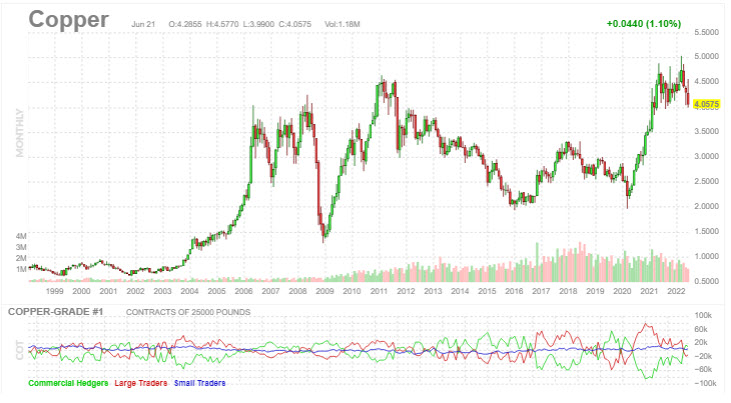 You can also see from that chart that commercial hedgers are growing as bold as they have since those Covid lows, while larger traders are jumping ship. We've enlarged that in the chart below, and it underscores how that large speculators on copper are now net short for the first time since the immediate aftermath of the U.S.-China trade war and the early whispers of the coronavirus. What that means is there's a lot of building pessimism toward copper, even while chart support suggests possible consolidation or a short-term floor.

Earlier this week, Schaeffer's Senior Quantitative Analyst Rocky White revisited the Dow's performance in pounds of copper. In his words, "this can help us catch rotations into or out of these assets as early as possible. Also, we can visualize the opportunity costs of stock investing compared to these assets." He found that the copper chart has been "declining since the pandemic, as copper outpaced stocks after the bottom in March 2020 and has held up better recently during the stock market selloff." The Dow, in pounds of copper, sits 27% above its long-term average. 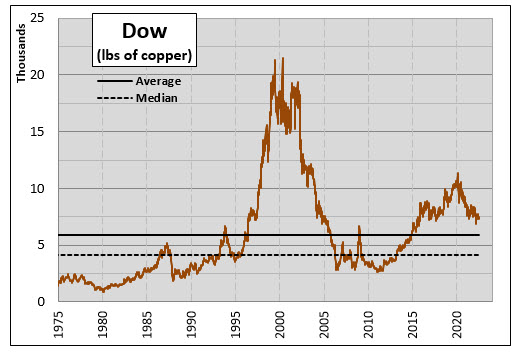 If you subscribe to the Dr. Copper theory and you believe all this mounting pessimism sets up for a prudent contrarian play, there's one stock in particular that an investor could take a flier on. Newmont Mining (NEM) is a gold producer but is also engaged in the production of copper, silver, lead and zinc. NEM has taken a nearly 18% haircut this quarter alone, but the silver lining is that pullback has put the stock within one standard deviation from a historically bullish trendline, if past is precedent.

According to data compiled by White, the six other times the equity has encountered its 260-day moving average, NEM was higher three of those times one month later, averaging a return of 7.5%. A move higher of similar magnitude would have Newmont stock knocking on the door of $70 in the next month for the first time since late May. What's more, NEM has additional support emerging at its $50 billion market cap level.

Amid this inflation-drive, volatility-sensitive market environment, it helps to return to safe-haven basics like metals as a measuring stick. While copper won't make you rich, it could help lead you to more lucrative opportunities. And if there's one thing to be gained from the pandemic, its that you should listen to your doctor. 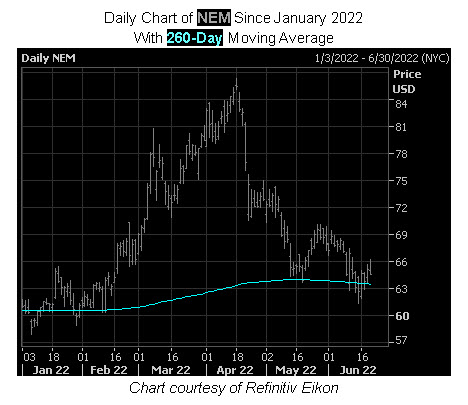 DigitalContentGroup@sir-inc.com
www.schaeffersresearch.com
Disclaimer: The views expressed in this article are those of the author and may not reflect those of Kitco Metals Inc. The author has made every effort to ensure accuracy of information provided; however, neither Kitco Metals Inc. nor the author can guarantee such accuracy. This article is strictly for informational purposes only. It is not a solicitation to make any exchange in commodities, securities or other financial instruments. Kitco Metals Inc. and the author of this article do not accept culpability for losses and/ or damages arising from the use of this publication.
new