Powell said before the Senate that he didn’t want a recession. Who would? However it can occur anyway, boosting gold prices.

“The Economy Is Strong”

Last week, Powell testified before Congress. He reiterated many things he said during his recent press conference, but I believe that a few issues deserve our attention.

First, Powell repeated that the Fed is strongly committed to combating high inflation and that additional rate hikes are coming. I wouldn’t be surprised to see the federal funds rate at or above 3% at the end of this year, which would make this tightening cycle the fastest in decades.

However, the US central bank is so aggressive only because the labor market remains strong, but if the economy slows down further and the unemployment rate starts to increase, the Fed will face a much more difficult dilemma – and I doubt whether it will stay as hawkish as today. Actually, the reason behind such steep hikes in interest rates could be the fact that the Fed is aware of this and wants to tighten its monetary policy as much as possible before the economy falters. However, such big moves could only accelerate the advent of trouble.

Second, Powell painted a surprisingly optimistic picture of the American economy, saying that it “is very strong and well positioned to handle tighter monetary policy.” Well, I doubt it. The US economy is highly indebted and steep hikes could be difficult to swallow for excessively leveraged entities. Other writings on the wall include the yield curve inverting, the S&P 500 Index entering the bear market, and credit spreads widening significantly, as the chart below shows. 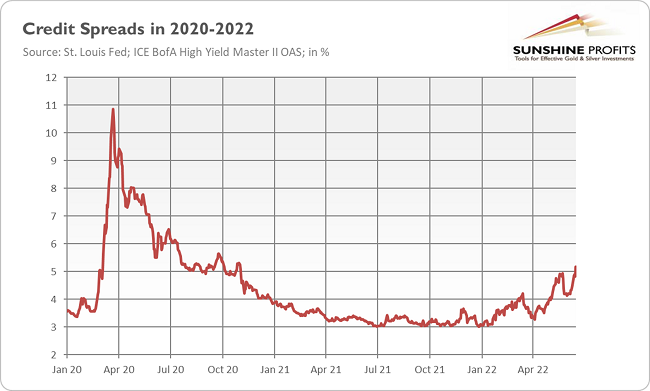 GDP growth is slowing down. Indeed, the GDPNow model estimates that GDP growth (seasonally adjusted annual rate) will increase by 0.0 percent in the second quarter of 2022. On my planet, zero growth doesn’t indicate a “very strong” economy, but stagnation. Now it’s time for a rebus for the Fed officials: stagnation plus inflation = ? Yes, very good, stagflation. Stagflation, which indicates huge macroeconomic imbalances, means all but a very strong economy.

It Can Happen Anyway

Third, Powell downplayed the risk of recession. He admitted that it was “certainly a possibility,” but not the intended outcome of the central bank: “We’re not trying to provoke and don’t think that we will need to provoke a recession.” Well, could he say anything else? Can you imagine the Fed Chair saying before Congress: “We totally failed to timely react to rising inflation and now we have to engineer a recession, or at least an economic slowdown, to curb it”? I can’t.

However, this is exactly what the Philips curve is about, still widely used by the central banks. According to the Phillips curve, there is a tradeoff between inflation and the unemployment rate, and you can only reduce inflation by increasing unemployment. Of course, the Phillips curve is terribly flawed, but this is what the central banks believe in. So, the Fed may not try to invoke a recession, but it certainly attempts to reduce aggregate demand and cool the overheated economy.

The central bankers’ goal is to become modestly restrictive on growth, or, in other words, to engineer a soft landing. The problem is that this is very difficult to achieve and recessions,  although not the necessarily intended outcome, are very often the unintended consequence of monetary policy tightening. Charles L. Evans, Chicago Fed President, was surprisingly honest about this issue:

We’re obviously taking on risk when we want to slow demand to keep it in line with supply. To think that we can fine tune something like this with tremendous precision – I mean, we just don’t have that ability.

Indeed, all the last three Fed’s hiking cycles were followed by financial crises and economic downturns (dot-com crisis, the Great Recession, repo crisis in 2019 and coronavirus crisis in 2020), as the chart below shows.

What does it all mean for the gold market? Well, the Fed is now really determined to curb inflation. Hence, precious metals investors have to be prepared for more rate hikes in the coming months. This hawkish stance will continue to put downward pressure on gold prices in the near future.

However, in the long or even medium term, I’m more bullish on gold. This is because GDP growth is slowing down, which increases the risk of stagflation and the next economic crisis. Economic confidence is clearly tumbling, which should increase the demand for gold as a safe haven. At some point, the tightening cycle will be over and the Fed will be forced to return to its dovish stance, which should be welcomed by the yellow metal.