The bears took control of the market, but refrained from gold

The bears awoke from their winter sleep and took control of Wall Street. However, they haven't conquered the gold market yet!

It's official: there is a bear market in equities! As the chart below shows, last month, the S&P 500 Index plunged more than 20% from its historic peak of 4797 points in early January 2022. A decline of greater than 20% is considered to mark a bear market as opposed to a normal correction within the bull market. The Dow Jones hasn't yet crossed that threshold, but the S&P better reflects the condition of the US stock market, so we can firmly state that bears took control of Wall Street for the first time since the pandemic crash. 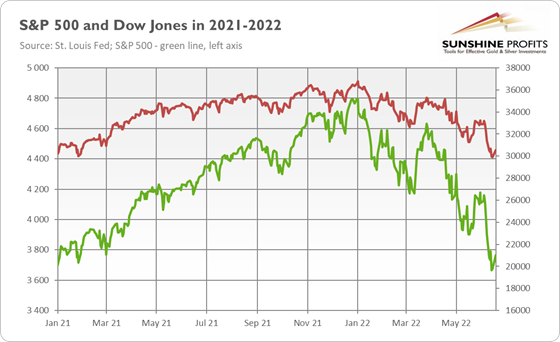 How long will the bear market last? According to Reuters, after World War II, on average, stocks declined slightly over a year from the peak to the bottom. So, the current bear market could continue for a few months. Similarly, on average, the S&P 500 index fell by 32.7% during modern bear markets. Hence, there is room for further declines in the stock market.

What does the bear market in equities mean for the US economy? Well, the bear market in stocks doesn't have to be something disturbing for the whole economy. As the old joke goes, "the stock market has predicted nine of the past five recessions." Indeed, 25 bear markets have happened since 1928, of which only fourteen have also seen recessions. 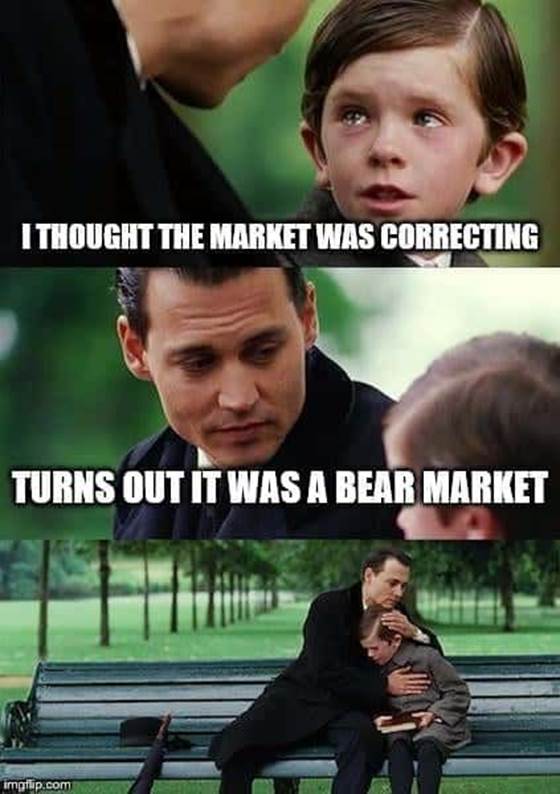 However, in modern times, the relationship between the stock market and overall economic activity has strengthened. There have been eleven bear markets since 1956, of which eight have been accompanied by recessions. Since 1968, all bear markets but one (the infamous 1987 crash) have coincided with overall economic crises. Finally, all four recent cases of bear markets (1990, 2000-2003, 2007-2009, and 2020) were accompanied by recessions (see the chart below). 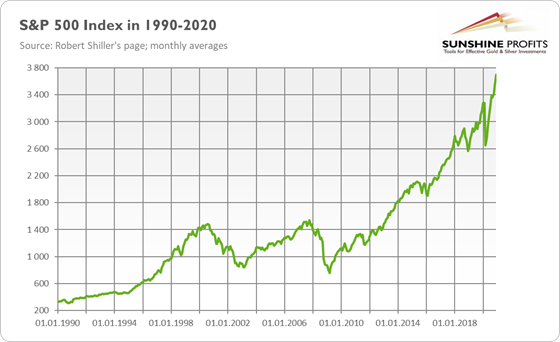 Hence, we should take the bearish stock market seriously. Although a bear market doesn't necessarily cause a recession, it sometimes portends one. For example, the dot-com bubble in the stock market reached its peak and burst in August 2000, seven months before the US economy fell into recession. When this occurred in March 2001, the S&P500 just entered bear market territory. Later, the stock market peaked again in October 2007, just two months before the official beginning of the Great Recession. It entered bearish territory in September 2008, when Lehman Brothers collapsed, triggering the most acute phase of the global financial crisis. Given that we are already five months since the S&P 500's most recent peak and one month since the index entered a bear market, a recession may be on the horizon (theoretically, we could be already in one, as the NBER declares official beginnings many months after they have already started).

Of course, each case is unique, and this time may be different. However, there are important reasons to worry. After all, the stock market dived due to the Fed's tightening cycle, initiated to curb high inflation. Although necessary to tame upward price pressure, it could trigger a recession. The last three economic downturns – and bear markets in equities – were preceded by hikes in the federal funds rate, as the chart below shows. 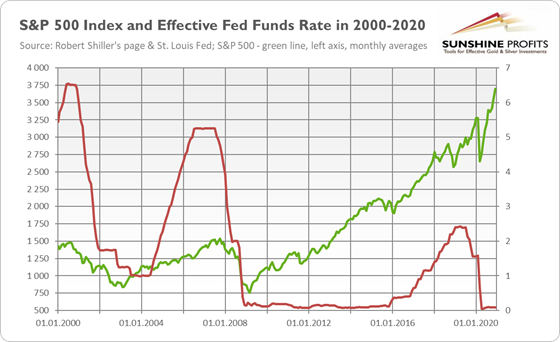 What does it all mean for the gold market? Well, bear markets that accompany recessions are generally positive for the yellow metal. However, the relationship is more nuanced than one could intuitively expect. In 2000-2001, gold declined initially in tandem with the stock market and bottomed out in April 2001, one month after the S&P 500 entered a bear market, as the chart below shows. 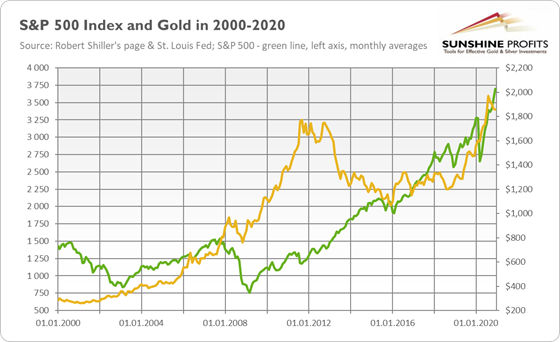 Then, it started a multi-year rally that ended in March 2008, in the middle of the Great Recession. Gold remained in a downward trend by November 2008, plunging in tandem with the stock market, although to a lesser extent. Only then did it start its fabulous surge. A similar pattern occurred in 2020: during the pandemic March, gold declined alongside the S&P 500, albeit to a lesser extent, and began to rally shortly after the initial sell-off.

This suggests that we could be close to the bottom in the gold market. If there is an asset sell-off when investors scramble for cash needed to fulfill their obligations and cover their margin calls, the yellow metal could decline further. However, when this phase of a crisis is over, gold should shine. Rising interest rates could continue to exert a downward pressure on the yellow metal for a while, but when they peak, gold will have a clear field to run.