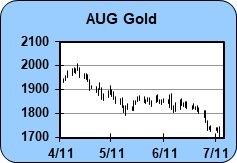 OUTSIDE MARKET DEVELOPMENTS: Global equity markets were lower overnight, with some exceptions seen around the Pacific rim. Economic news included a softer than expected British private house price balance reading, hotter than expected Australian consumer inflation expectations, a decline in employment in Australia, a surprise decline in the Australian unemployment rate, much softer than expected Japanese capacity utilization/industrial production, hotter than expected German wholesale prices, and softer than expected Swiss producer and import prices. The North American session will start out with a weekly reading on initial jobless claims that are expected to hold steady with the previous 235,000. Ongoing jobless claims are expected to have a modest increase from last week’s 1.375 million. The June US PPI is expected to show a minimal decline from May's 10.8% year-over-year rate. The US core PPI (excluding food and energy) is forecast to have a modest decline from May's 8.3% year-over-year rate. May Canadian manufacturing sales are expected to be down slightly from April's 1.7% reading. Earnings announcements will include J.P. Morgan, Morgan Stanley, Cintas and ConAgra Brands before the Wall Street opening.

With a fresh contract high in the dollar and market chatter regarding a US interest rate hike of 1%, gold and silver start the session back under pressure. Unfortunately for the bull camp, the markets are likely to see fresh selling following the second round of US inflation readings (PPI) this morning. Given the significant recoveries yesterday, both gold and silver are technically vulnerable to a quick slide back toward this week's lows. In a minor supportive development overnight, Indian gold jewelry exports to the UAE are showing signs of improving, attributable to a recent trade agreement between the two countries. Another very large, 2.9-million-ounce outflow from silver ETFs yesterday and a similarly large 87,934-ounce outflow s from gold ETFs are negative demand indicators. While reductions in the spec and fund net long readings in both markets (adjusted into the recent lows yesterday) should begin to reduce the magnitude of stop loss declines, tech conditions are unlikely to stop the carnage. From a longer-term perspective, neither market is likely to make a solid bottom, and they are even less likely to recover aggressively, until the trade has reason to believe that planned Fed rate hikes will not need to be adjusted even higher and that a recession can be avoided. Expectations for US PPI for June call for a gain of 0.8% in the month over month comparison and 10.7% on a year-over-year basis. If the PPI readings are hot, we could expect gold and silver to make new lows for the move.

The decline in palladium prices this week is what you would expect from a market expecting a ratcheting upward in the magnitude of the US rate hike at the end of the month as well as the increased possibility that the economy will slip into a recession, as that would likely result in softer physical and investment demand. The Bank of Canada surprised the markets with an aggressive, 100-basis point rate hike yesterday. This could create the potential for the US Fed to hike rates between meetings. Palladium ETF holdings yesterday declined by 407 ounces yesterday and are now 11% lower on the year. Indications that a major Russian "mining company" is flirting with bankruptcy because of sanctions could create a measure of supply uncertainty for platinum and palladium and offer some fundamental support. ETF holdings in platinum continue to decline, with yesterday's outflow of 13,899 ounces bringing the year-to-date change to - 8.8%. We expect platinum and palladium prices to behave as they did on Wednesday, US PPI is softer than expected (less than +0.8%). However, traders should be cognizant of liquidated spec positioning in both markets, especially if positioning is adjusted into recent spike down action.

MARKET IDEAS: Unless the PPI is surprisingly soft, we would expect similar action in precious metals today as was seen yesterday, with a strong prospect of the markets seeing new for the move. Another fresh spike down could offer a short-term buying opportunity in extremely oversold markets but only after the PPI is fully factored. 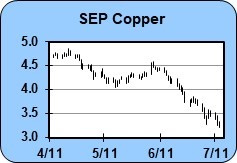 Not surprisingly, a ratcheting upward in global recession fears and talk of a 1% US rate hike later this month has knocked copper back from yesterday's bounce. Headline coverage pointing out the market's economic indicator status is likely causing fresh hedge and speculative selling. With a long list of bearish fundamental factors, we see fresh contract lows ahead. Even Chinese news has shifted bearish, with fresh concern surfacing on the property sector overnight. Ordinarily, news that Chinese June copper imports jumped by 15% over the previous month would have sent the market into a short-covering rally. Bloomberg reports that the Chinese Covid outbreak appears to be easing with a rate fewer than 300 infections per day seen for the first time in 11 days earlier this week. While not a universal view among economists, the recently released Chinese import/export data depicted an economy holding up in the face of a slow unwinding of activity restrictions. The market is concerned that the outbreak will not be contained, as well as being worried that a global recession will result from the waves of central bank rate hikes ahead. Evidence of aggressive central bank action was seen yesterday after the Bank of Canada raised interest rates by 100 basis points. With the market $0.36 below the level where the last COT positioning report was measured at its low yesterday, the spec and fund net short is likely its largest since March 2020 (the start of the pandemic panic).

MARKET IDEAS: The copper market is even more oversold than we noted in yesterday's coverage, and with another major US inflation report out later today, it is likely to make fresh contract lows. The odds of a hot PPI are high enough to expect another sharp washout in copper.