S&P 500 slowly rising into the FOMC served to confirm the upcoming bullish interpretation of Fed moves. On one hand, the 75bp rate hike is over, on the other hand less clarity about future rate hikes rules now – markets remained anchored in the now, running with the glass is half full message. The part where Powell mentioned that an aggressive September rate hike is on the table if justified by incoming inflation data (an outsized September one won't happen in my view), got less scrutiny. And the same goes for his willingness to tolerate below-trend economic growth and some pain in the labor market.

So, why is the market rallying then? The upcoming CPI would come in a bit softer on account of the June gasoline and heating oil peaks, which would be balanced out against unrelenting services inflation. Think rents that are lagging behind the housing prices – housing is only starting to cool down. There is more pain ahead, but of course the consumer discretionaries don't see that yet – it's not the right time as the consumer sentiment hasn't yet filtered through to retail sales. Compared to what awaits at year end, the U.S. economy is still doing very fine now (however incredibly this sounds to the very sensitive small business owners, close to half of who perceive the U.S. already to be in a recession). Coupled with tech layoffs, hiring freezes, and e.g. bad META earnings just in, this weakness isn't yet universal as the key aspect of the prior 4 weeks was this – the 100bp rate July hike that I didn't trust one bit as coming, took the markets down inordinately (the bears got ahead of themselves simply). Reversion to the mean – talked in Monday's extensive analysis – is thus winning.

Precious metals are sensing the monetary shift arguably the best – a strong session in the miners is ahead. Even copper is to shine before any sentiment setbacks put the lid upon price gains next again. Crude oil is likely to remain well bid, and any (look for them to be rather shallow) declines are to be reversed relatively fast. As regards cryptos, they would benefit as well, with the most significant appreciation already behind us – there is easier fruit to pick elsewhere, especially in the precious metals that are getting ready for a great autumn ahead.

Today, I've released all the analytical thoughts customarily available for premium subscribers) so that you know what to expect both before and after turning points, what kind of efforts and preparation do get into these. 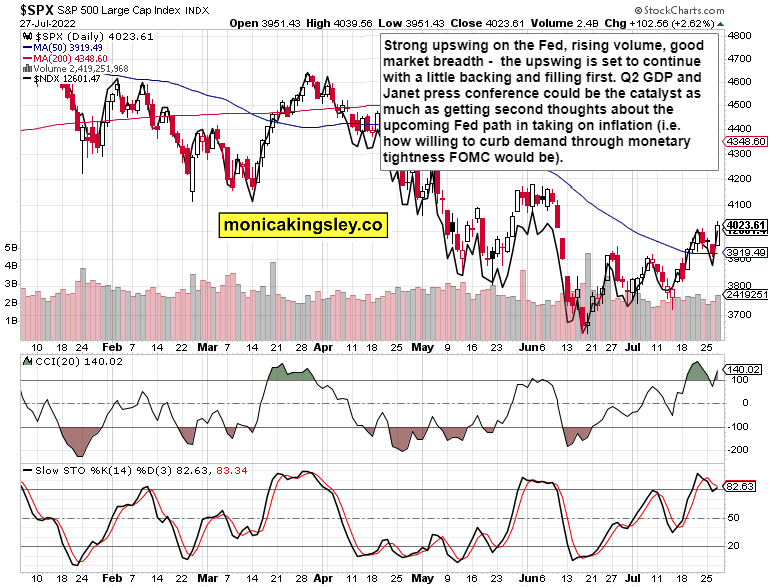 S&P 500 is about to continue rising, shaking off the Q2 GDP data in preference of the Fed not going too hawkish. The rich caption says it all.

HYG had duly reversed, and been patiently extending gains going into FOMC – bonds agree with the risk-on interpretation. Time to go up still before worsening reality takes over.

Precious metals posture has brightened up, and the months ahead are indeed looking much better now. The reaction to the following Fed jawboning would be telling, but we have a few weeks to go still.

Thank you for having read today's free analysis, which is a small part of the premium Monica's Trading Signals covering all the markets you're used to (stocks, bonds, gold, silver, oil, copper, cryptos), and of the premium Monica's Stock Signals presenting stocks and bonds only. Both publications feature real-time trade calls and intraday updates. While at my homesite, you can subscribe to the free Monica's Insider Club for instant publishing notifications and other content useful for making your own trade moves. Thanks for subscribing & all your support that makes this endeavor possible!