JPMorgan; the wolf is guarding the golden goose

Extensive exposés by Bloomberg and Reuters News covering the current trial of JPMorgan Chase & Co.’s gold traders revealed shocking details of how deep the rabbit hole went, and how massive the fraud was. It seems that for well over a decade the Wolf (JPMorgan) guarded the golden goose.

The U.S. Justice Department has brought charges against three former JPMorgan employees charging them with conspiracy and racketeering charges for manipulating futures trading of precious metals between 2008 and 2016.

The U.S. Justice Department alleged that a deliberate plan to manipulate and profit from futures trading of gold, silver, platinum, and palladium was spearheaded by Michael Nowak, “the boss”.

The trial has run its course and the jury has now gone into deliberation to reach a verdict. The trial uncovered some startling and alarming facts and details. The government’s prosecutor, Matthew Sullivan said during closing arguments on Thursday that Nowak and Smith taught the pair to spoof as part of a yearslong scheme. He told the jury, "The defendants had power and influence, and together they abused their positions and rigged the precious metals markets for their gain," 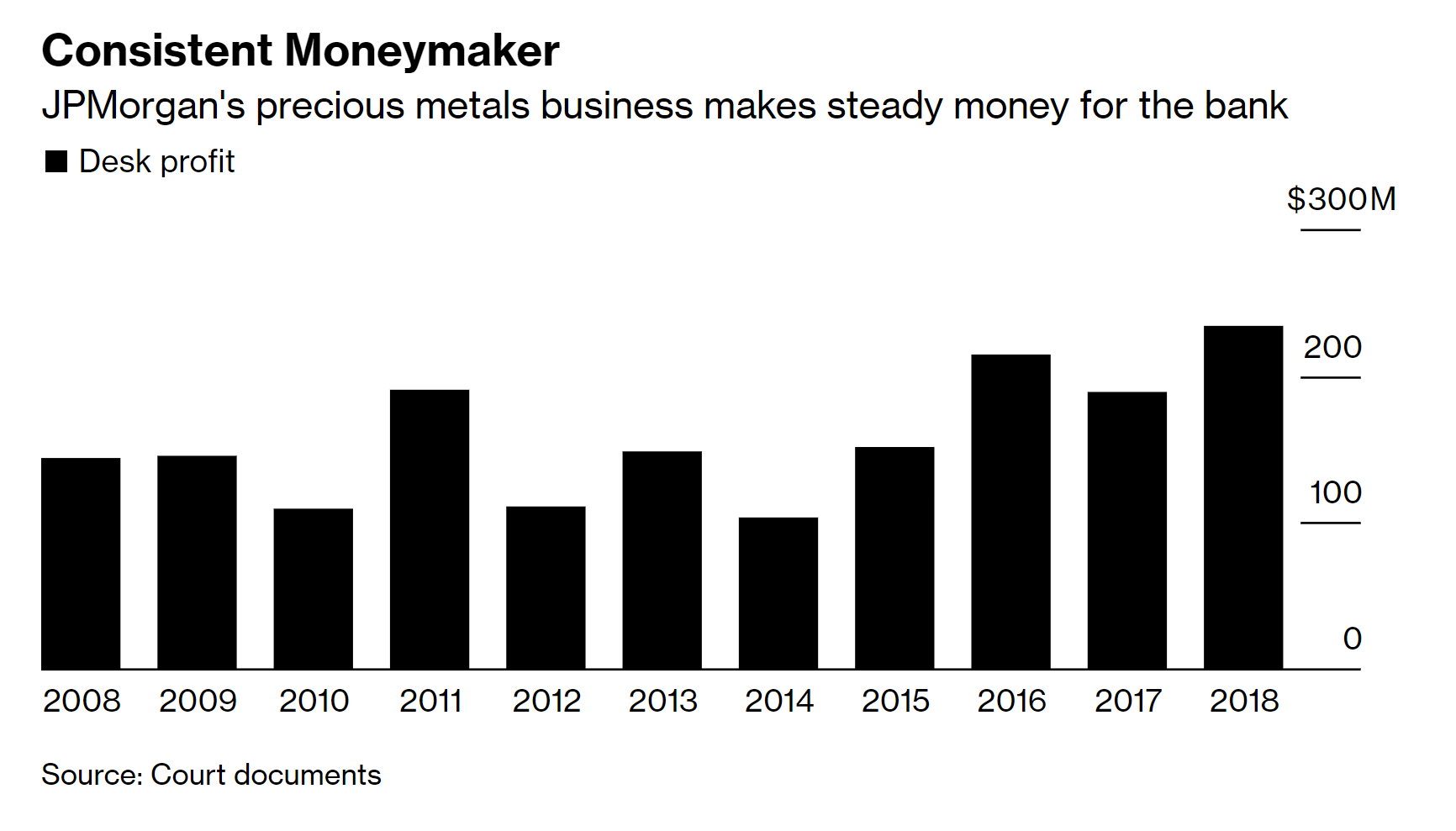 Testimony and court documents revealed how profitable it was for the trading team at JPMorgan, estimated annual profits were between $109 million and $234 million per year between 2008 and 2018. The vast majority of these gains came from trading with an additional $30 million per year profit resulting from their trading and transporting physical precious metals. The profits disclosed in the trial were overshadowed by profits obtained in 2020 when J.P. Morgan made $1 billion from trading precious metals.

Bloomberg news reported that their top traders and employees were rewarded handsomely.

“JPMorgan’s top precious metals employees on the desk were remunerated handsomely, and some jurors audibly gasped when the court was told how much the defendants had earned. Ruffo, the bank’s hedge fund salesman, was paid $10.5 million from 2008 to 2016. Smith, the top gold trader, got $9.9 million. Nowak, their boss, made the most of all: $23.7 million over the same period. Their pay was linked to the profits they made for the bank. FBI agent Marc Troiano, citing internal JPMorgan data, told the court that the total profit allocated to Ruffo from 2008 to 2016 was $70.3 million. Smith generated about $117 million over the same period, while Nowak made the bank $186 million, including $44 million in 2016.” 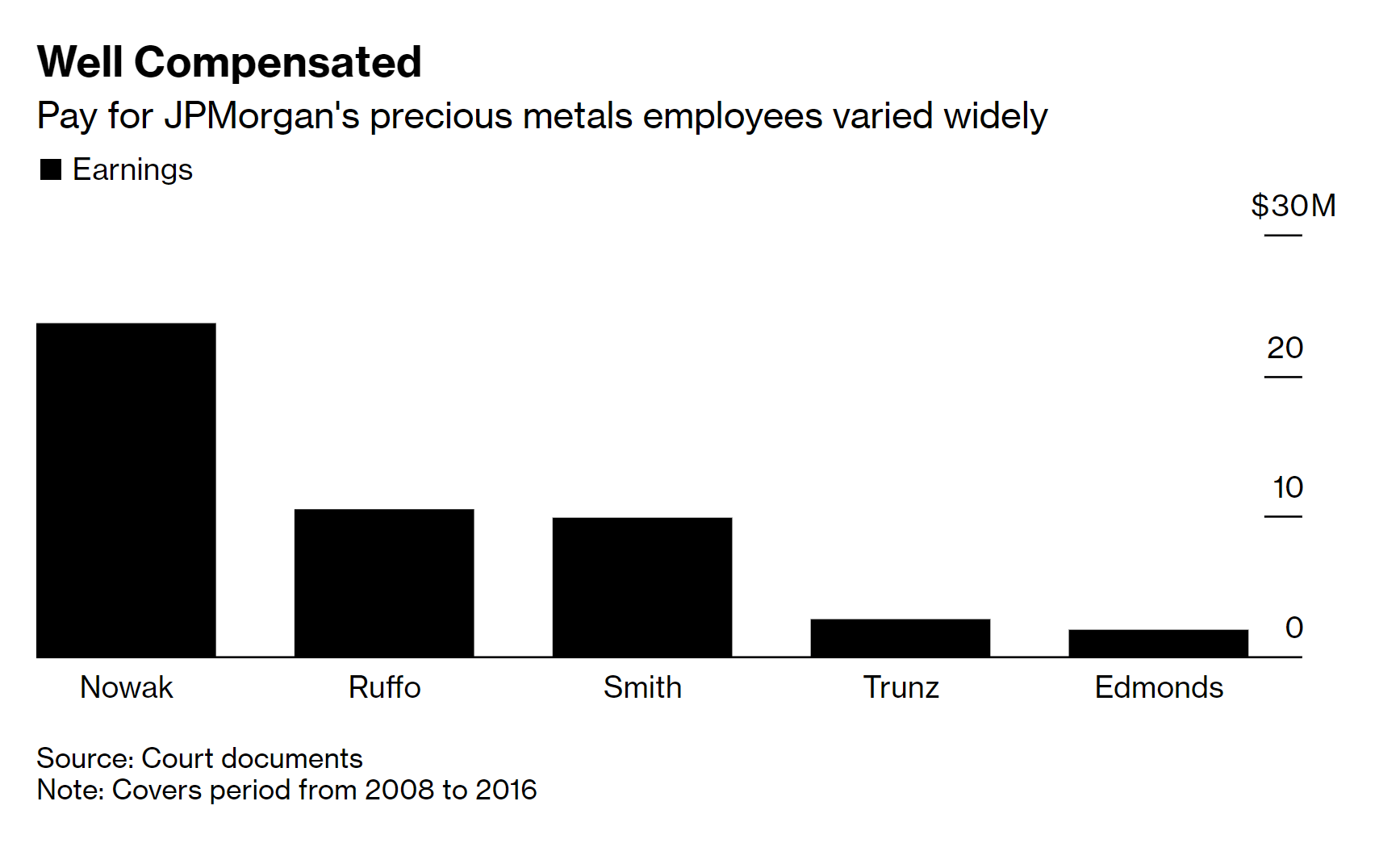 It will be interesting to hear the verdict of the jury once they conclude their deliberation. The actions by a handful of traders working for a corrupt corporation single-handedly removed any level of fairness to the tens of thousands of individual traders that use the same markets believing that government oversight and regulations will create a fair and level playing field. In the case of JPMorgan, the government clearly, completely and utterly failed to protect the individual investor.